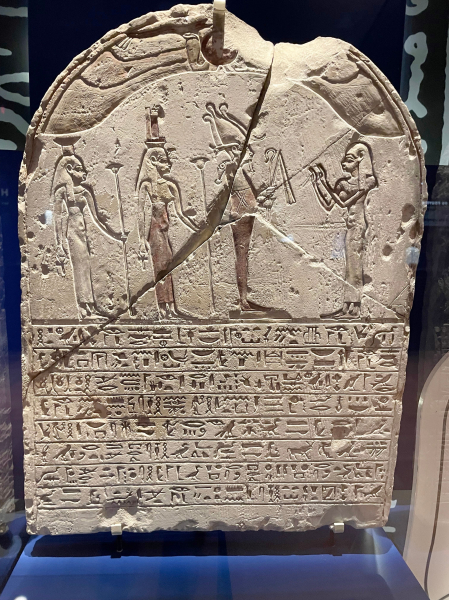 The Musée de la civilization inaugurated one of its major exhibitions on Wednesday. Time of the Pharaohs impresses with the quantity of artefacts presented, more than 350, but also with the beauty and the state of conservation of these objects, some of which date back almost 4000 years.

Despite the presentation of Fascinating Mummies in 2009 and Magical Egypt em>in 2015, the museum has not finished unraveling the mysteries of Egypt. This time, the exhibition divided into eight zones focuses as much on the pharaohs as on the environment and daily life of ordinary Egyptians who lived before our era.

Among the objects that make us take a great leap in history, let us note several stelae with mysterious hieroglyphs, statues of divinities, coffins, fragments of temples, jewels, a mummy of a cat, a sacred animal, and large models. , including that of the first known pyramid.

This replica of a sailing boat, the main means of transport on the Nile, dates back 4000 years.

A large section is reserved for “humble but unique” everyday objects of the time, such as clay vessels. The star object is undoubtedly a simple doormat that dates back 4000 years.

“Several objects in the exhibition have been able to pass over time because they are quite robust, made of stone or granite, explains curator Vincent Giguère. Here we have a doormat made of papyrus, which is a plant material. He could very well have disappeared. We are extremely surprised to see that when we open the boxes, it is an unexpected encounter with History. »

Another example of exceptional preservation is a piece of papyrus from the Book of the Dead, a document of great historical value that explained what to do after death to have eternal life. “The play will not be performed for quite some time, given its great fragility”, notes Vincent Giguère.

An extract from the Book of the Dead, written on papyrus.

See inside the mummies

Ancient Egypt was ruled by approximately 170 pharaohs, who were divine rulers, half-human, half-god. The exhibition highlights six of the most famous of them, Cheops, Hatshepsut, Thutmose III, Amenhotep III, Akhenaten and Ramses II with various objects related to them.

The exhibition presents a mummy, its sarcophagus, a coffin and a mummy blanket in exceptional condition.

The highlight of the exhibition concerns mummification and funerary rituals. The mummy and sarcophagus of Lady Takhar, a woman from Thebes who lived until 656 BCE, are on display there. interior of the mummy, i.e. its skeleton and the 50 layers of bandages.

“The mummy was scanned with new imaging techniques in a specialized CT machine, which made it possible to see the successive layers of the mummy without destroying it. In the past, we had the bad habit of unpacking the mummy. Yes, it allowed us to see amulets, but we were destroying what we were observing. »