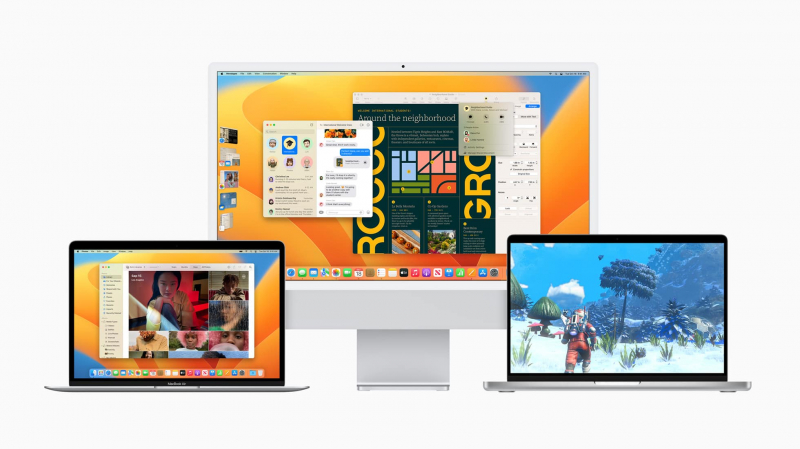 Apple's latest system software features some new multitasking ideas and a brand new System Settings app. And of course, it's connected to your iPhone more than ever.

Let's take a look back at previous systems where macOS Big Sur version 11 was bold in 2020, while macOS Monterey version 12 was more muted and mature in 2021. Freshly launched, the new macOS Ventura version 13 focuses more on aesthetics.

Speaking of aesthetics, you will see that this update largely adopts yellow and orange colors. While version 13 has few big changes, the overall improvements and tweaks are enough to make macOS Monterey (version 12) look dated.

A One of the first things you notice after installing Ventura is the System Preferences app, which becomes System Settings, showcasing a new design optimized for efficient browsing on Mac similar to that on iPhone and iPad, says Apple.

< p>The new layout simplifies the process for a minimal learning curve if you already use an iPhone or iPad. Another proof that the gap between macOS and iOS is narrowing.

The goal of the Stage Manager function is to help users stay focused and move easily from task to task.

By activating Stage Manager from the Control Center, the current window they are working in is displayed prominently in the center, while other windows appear on the left so that you can switch from one task to another with ease.

To create the ideal workspace, users can create groups of windows or apps when working on specific tasks or projects.

These stacks are invisible unless you hover your cursor over the left side of the screen. If you group two or more apps, they will appear in the same stack and open together.

However, by putting an application in full screen, Stage Manager disappears.

With the Continuity Camera function, it is possible to use one of the lenses of your iPhone with video conferencing apps, such as FaceTime, Zoom and Webex . And with Desktop View, you can take advantage of iPhone's ultra-wide-angle camera to show both the person's face and their workspace during a video call – great for video tutorials. , layouts.practices

Shared tab groups in Safari usher in a collaborative mode for sharing websites with family or colleagues.

You can create a list of bookmarks on a shared start page to kick off a group – whether planning a family vacation or doing research.

The shared tab group feature, in the Safari browser

In the same vein, you can now initiate a FaceTime call directly from Safari with everyone else who participates in a group of shared tabs or from a collaborative file with other people who work there.

In closing, macOS Ventura is well-designed, and at least a few days or weeks after its initial release, all Mac users should upgrade. If your machine (from 2017…) can run macOS Ventura, upgrade it for security and new features.