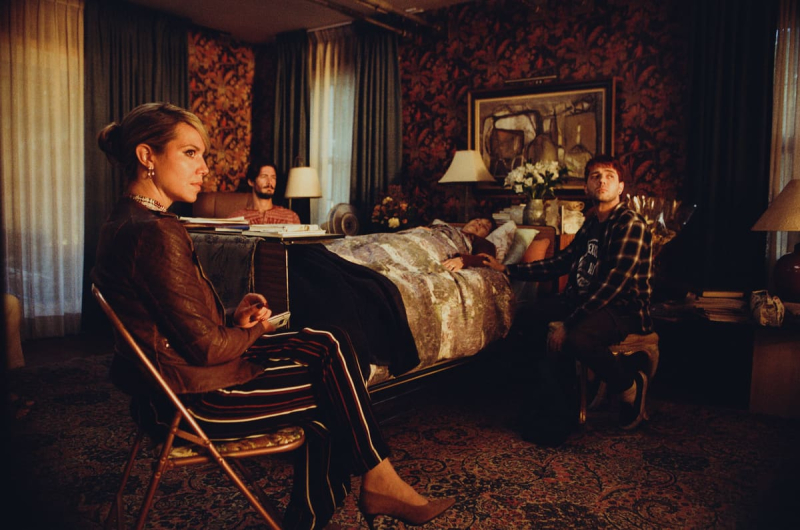 Xavier Dolan delivers an anxiety-provoking, dense and moving psychological thriller with “The Night Where Laurier Gaudreault Woke Up”, his very first series which tells the story of a family whose trajectory dramatically changes following an incident in October 1991, while everyone was sleeping.

The wind picks up on the quiet neighborhood of Val-des-Chutes where Madeleine Larouche (excellent Anne Dorval) raised her four children. His death, which occurs at the beginning of the story – we are in 2019 – threatens to reveal a painful secret.

The eldest, Julien (incredible Patrick Hivon), has been sober for 12 years and does not spin the perfect happiness alongside Chantal (Magalie Lépine-Blondeau), he who was destined for a great future as a baseball player. He is unhappy to see his sister Mireille (Julie Le Breton) come to town after decades of absence. Thanatologist in Montreal, “Mimi” is responsible for embalming her mother, at the latter's request. With her deviant sexuality, she is unable to forge lasting bonds and collects young lovers.

One thing leading to another, we understand that a lie has ruined the life of the whole family, including the two youngest, Denis (Éric Bruneau), who suffers from compulsive hoarding and lives in a pigsty, and Elliot (Xavier Dolan), just out of rehab.

Mireille's bad habit of going into people's homes in their sleep to watch them sleep plunged her into chaos when, at age 14, she repeated her little trick in Laurier Gaudreault's room ( Pier-Gabriel Lajoie).

Could a box dug up in Mado's garden reveal what someone is trying to hide? This contains a baseball, a ring and a ticket from the Nirvana show at Les Foufounes Electriques in 1991.

This very cinematic adaptation of the eponymous play by Michel Marc Bouchard presented at the TNM, in 2019, allows us to dig deeper into the soul of the characters, their weaknesses and their wounds. Xavier Dolan added plenty of flesh around the bone across the five episodes, which unfold in the past and present. He said on Wednesday at the round table that “it was his favorite filming experience”.

The story is colored by the mourning of the mother, a visceral need for truth and a necessary reconciliation. Several of the actors who shone on the boards are putting it back on the screen and all delivering an incredible performance.

Quebec fiction enthusiasts have been waiting for this strong work for a long time, which will not disappoint them. It joins other Club illico series worth seeing, such as “Le temps des raspberries”, “Motel Paradis”, “The fault” or “Audrey is back”.

Dolan followers will find the colorful costumes of his characters from “I Killed My Mother”, “Laurence Anayways” and “Mommy”. The same goes for make-up and hairstyles. And what about the skilfully studied decorations and tapestries. Everything is magnified by the images of André Turpin, who has collaborated with Dolan several times, as well as by the music of Hans Zimmer and David Fleming, which grabs us from the first notes of the musical theme. Pieces by Rufus Wainwright, Jean Leloup, France D'Amour and Ginette Reno creep into the series, and Chantal covers Celine Dion's “Regarde-moi” at karaoke, a scene that brings smiles through all the drama.

For the editing, the one-man band that is Dolan was supported by Stéphane Lafleur for a few episodes.

The budget for the 82 days of shooting was not disclosed, “ but it is reflected on the screen”, we repeated. And the international ambitions of the series are obvious, it having been partly financed by France, where it will be released in January via CANAL +.

We like series of six to eight episodes. In this case, with five well-packed episodes, we wrap it all up in a single evening rich in emotions.

Produced by Nancy Grant and Xavier Dolan, in collaboration with Quebecor Content and CANAL +, “La night when Laurier Gaudreault woke up” is coming to Club illico on Thursday.