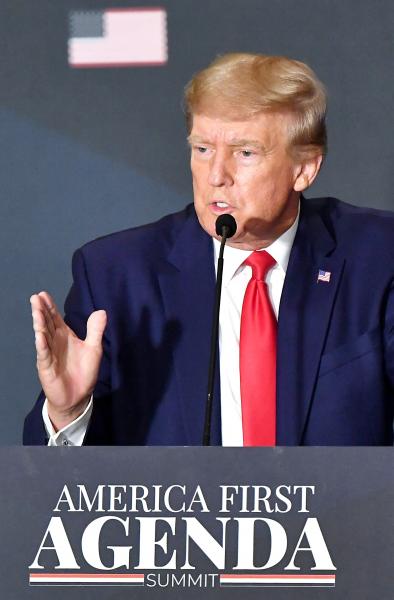 Commentators and analysts have feared a civil war in the United States for two years. Since Trump shouted that the Democrats stole the election from him and that Joe Biden is not the legitimate President of the United States.

He himself launched hostilities by inciting his supporters to invade the Capitol to prevent his Vice President, Mike Pence, from confirming his electoral defeat before Congress.

Republican candidates in the midterm elections are following in his footsteps by exciting their voters with election advertisements in which they are seen, assault rifles in hand, in combat gear, claiming that they prepare to confront their democratic, liberal and socialist enemies. The whole planet if necessary.

In one video, a trumped-up candidate in Ohio, obese and bearded with a sinister expression, walks through ruins with his AR-15 ready to open fire. He tells his constituents that the United States must be restored to its rightful place. His slogan: “Make America Dominant Again”. He won the Republican nomination.

In Missouri, another Trumpian primary candidate swears, assault rifle in hand, to hunt down RINOs (Republican In Name Only), Republicans who oppose Trump. The war is on!

The Republican Party has turned into a neofascist formation with its armed phalanxes like the Proud Boys and other militias.

The noose is tightening on Trump

The Attorney General, the indolent Merrick Garland, finally decided to act. He no longer fears that prosecuting Trump will appear “political.” He must be much more concerned now about the message it would send if he didn't charge him.

The federal investigation is heading toward charges of inciting a riot or inciting an insurrection against Trump. After the recent revelations before the Jan. 6 commission, the facts are unmistakable about the pivotal role he played in the unrest on Capitol Hill.

The Wall Street Journalreports d Moreover, Vice President Mike Pence's two top advisers are cooperating with federal prosecutors. They explained to a Grand Jury Trump's illegal moves to overturn the 2020 election results.It should therefore soon be Trump's turn to receive a subpoena. He will refuse to obey the subpoena like his co-conspirator Steve Bannon did. The temptation is going to be strong to barricade himself at Mar-e-Lago if the FBI tries to arrest him.

Do you think Trump would be reluctant to appeal to his supporters and organized militias in more than 40 states to come to his defense? It could also encourage them to occupy symbolic or strategic US government locations. The far-right militias, often made up of former soldiers and police officers, have the declared objective of resisting the “tyranny” of the federal state.

His candidacy for the presidential elections of 2024 will further blur more cards by complicating the criminal proceedings against him.

It's looking bad for Trump and the United States.