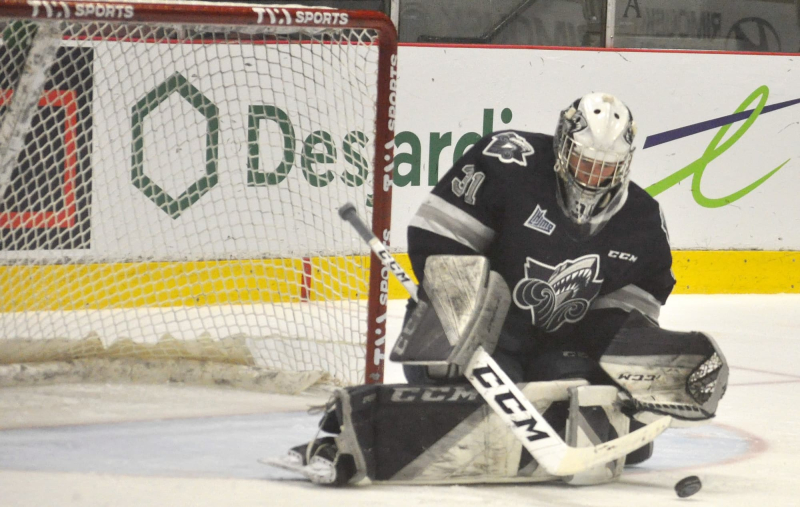 RIMOUSKI | Patrik Hamrla stopped all 15 Islanders shots for his third shutout in the past two weeks in a 3-0 win for the Oceanic on Friday night in Charlottetown. The Océanic dominated 41 15 in shots.

“We had a slow start, but we found our rhythm in the third period. Gaudio [Alexander] and Béland [Julien] had very strong matches. I really liked the work of Aguilar [Mathis] who was a metronome on the blue line and Charles Côté too. During our downturn in the second, Hamrla was solid,” analyzed Océanic head coach Serge Beausoleil.

The Océanic opened the scoring in the sixth minute of game when Alexander Gaudio pushed the puck behind goalkeeper Tye Austin after the latter blocked Mathis Aguilar's shot without being able to keep the puck.

Julien Béland doubled the Océanic's lead early in the second by using his long reach to beat the Islanders goalkeeper from behind.

Defender Charles Côté amassed a second pass in the match on the streak. The locals showed some teeth in the second half of the engagement, but Patrik Hamrla was solid in front of the Océanic net.

The third period was the affair of Islanders goalkeeper Tye Austin who blocked 13 shots while his team threw just twice on Hamrla. William Dumoulin completed in an empty net at the end of the game.

Earlier in the day on Friday, the Océanic acquired the rights by Josh Nadeau of the Bathurst Titan against a 10th round pick. He is the older brother of Bradly Nadeau who also belongs to the Oceanic. Both are eyeing the University of Maine. Could the acquisition of the eldest convince the entourage to opt for Rimouski?