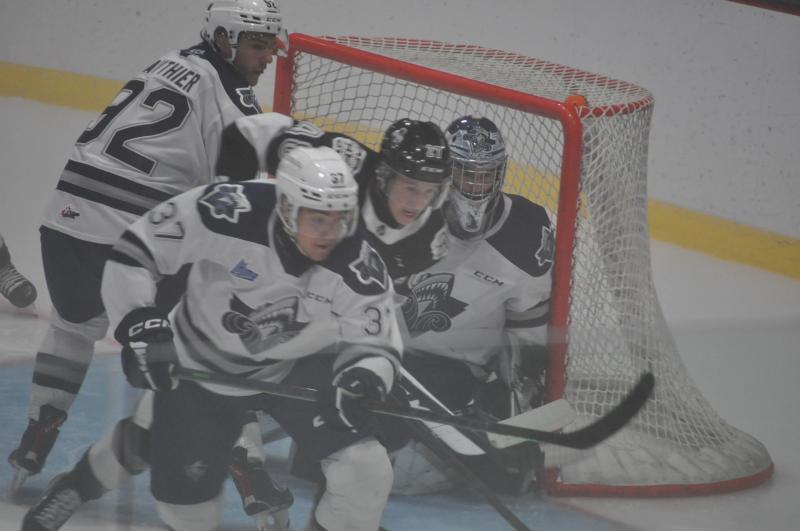 CHANDLER | Jan Spynar scored two goals and added a third in the shootout to lead the Rimouski Océanic to a 3-2 shootout win over the Blainville-Boisbriand Armada in a match where the intensity was worthy of a playoff game this Saturday evening in front of 2,000 people in Chandler, Gaspésie.

The intensity was at its height to the delight of Chandler fans who loudly voiced their satisfaction.

Océanic goaltender Gabriel Robert was perfect in the first 40 minutes of play.

The Océanic took advantage of the Armada's indiscipline to impose its rhythm in the first period. Jan Spynar took advantage of a nice pass from William Dumoulin to open the scoring in the first minute of play, on the power play. Subsequently, the Armada received five more penalties. The Océanic was unable to capitalize, especially on a long double power play of almost two minutes. Very intense first period with a lot of solid hits.

A whole game of Spynar

Midway through the second period, Spynar scored his second of the game, still on the power play, to double the Océanic lead. As for his first goal, Dumoulin and Alexandre Blais are accomplices. For this second match in 24 hours, a certain animosity has settled between the two teams. The players talk to each other a lot on the ice.

At the start of the third period, Xavier Sarrasin reduced the gap to one goal, on a play initiated by Josh Lawrence. A rare fight broke out with just over five minutes to go between Frédéric Brunet and Alexey Kulikov. With five seconds on the clock, Lawrence pushed the game into overtime.

Alexis Bourque is trying to stand out in front of the Océanic net, but he is being watched closely.

Serge Beausoleil had three changes to the Rimouski roster. Injured on Friday, 20-year-old forward Luka Verreault, whose maternal family comes from Chandler, missed the game, as did Xavier Fillion and Cory MacGillivray who were left out. Jacob Mathieu, Quinn Kennedy and Charles have been inserted into the roster. Patrik Hamrla is in camp for the Carolina Hurricanes while Luke Coughlin will miss several weeks with an injury.

The Armada was using the same roster as Friday, with one exception. Nicholas Sheehan was the starting goaltender in place of Charles-Edward Gravel and he did very well. Alexis Brisson, Jérémie Dumas-Larouche and Anri Ravinskis are injured while Alexis Gendron is in an NHL camp.

The Océanic will complete its preparatory schedule on Friday, September 16 by hosting the Remparts of Quebec to Matane.