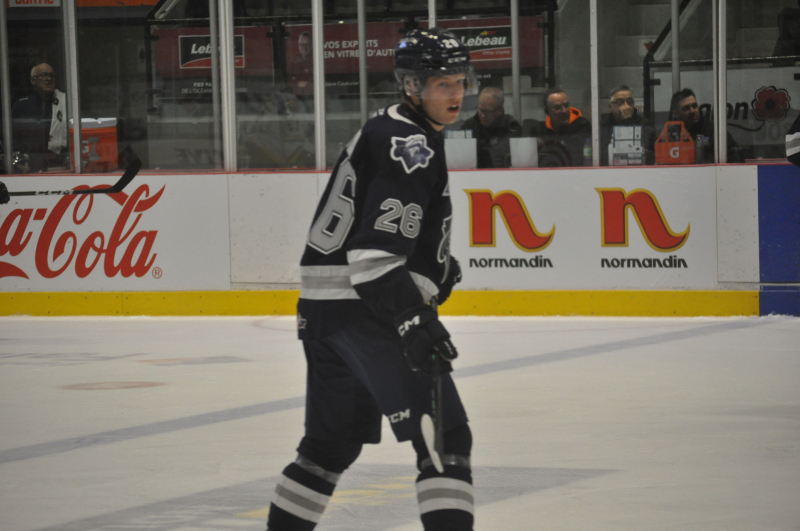 RIMOUSKI-Rimouski Océanic assistant coach Alexis Loiseau expects more offensive production from the veterans of the team returning from a two-game losing streak in as many days in Chicoutimi and Quebec where the Rimouski team scored only three goals.

Loiseau is well placed to talk about the importance of 19- and 20-year-old veterans for a junior squad, having amassed 96 points as a 20-year-old in 2014-15, in addition to adding 26 points in 20 playoff games. His offensive production had exploded at 19 after two less consistent seasons in scoring.

The youngest show the way

“Our 16 and 17 year olds give us good hockey, but we don’t expect the same consistency from the younger players during a long season. Normally, it is the 3rd and 4th year players who have to demonstrate this consistency that we do not always see this season. Guys know it. They work hard. These are players that we have developed and that we like,” commented Alexis Loiseau on the eve of a home game against the Chicoutimi Sags.

On Friday, ahead of the two road games, head coach Serge Beausoleil said he expected more from his 20-year-olds. Patrick LeBlanc picked up an assist while Luka Verreault and William Dumoulin were shut out.

A defender leads the scoring

When we analyze the ranking of the Océanic's scorers, we realize that despite the presence of three 20-year-old forwards, it is 19-year-old defender Frédéric Brunet who sits at the top with 17 points ahead of the 17-year-old Alexandre Blais (14 points, including 5 assists in a game last week). “When a 17-year-old makes five points in a game, we take it, but we know it won't happen in every game,” says Alexis Loiseau, who works mainly with forwards and who is responsible for the power play.

More stability on the power play

The power play has been producing more for a few weeks. “We finally have a more stable first unit that is successful,” said Alexis Loiseau about the quintet made up of Brunet, Blais, William Dumoulin, Jan Sprynar and Maël St-Denis. It was this unit that scored the Océanic's only goal on Sunday in Quebec City.

A revenge to take

Tuesday night , the Océanic will try to avenge its 3-2 loss suffered Saturday against the Sags in Chicoutimi. “We didn't play with our usual intensity. It was much better on Sunday in Quebec. The Sags always work very hard. They will arrive here well prepared. It will be up to us to be even more so,” said the assistant coach.