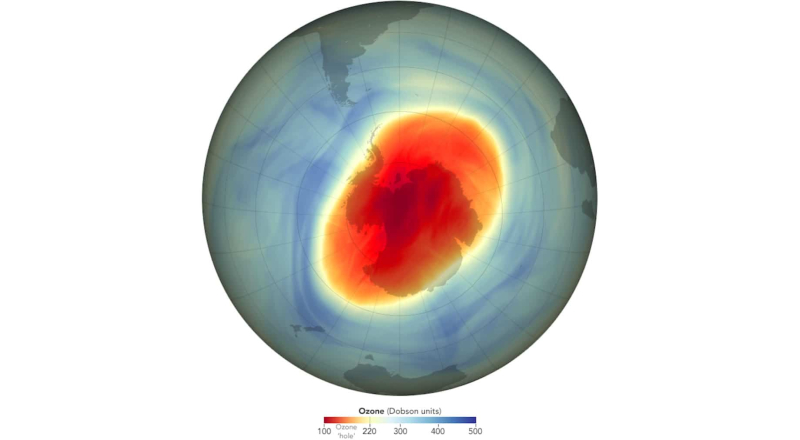 “If current policies remain in place, the ozone layer is expected to recover to 1980 values ​​(before the hole appeared) by about 2066 over Antarctica, 2045 over the Arctic and 2040 in the rest of the world,” says the UN Environment in its four-year estimate.

“Phasing out nearly 99% of banned ozone-depleting substances has helped preserve the ocean layer. ozone and contributed significantly to its replenishment in the upper stratosphere and to a decrease in human exposure to harmful ultraviolet (UV) rays from the sun,” note the UN-mandated experts.

The hole in the ozone layer was created by man-made pollution, particularly by chlorofluorocarbons (CFCs) once emitted by many refrigerators.

In recent decades, however, global cooperation has given it a chance to rebuild.

The Montreal Protocol (Canada), signed in 1987 and ratified by 195 countries, has greatly reduced the amount of CFCs in the atmosphere, and the ozone layer will be able to recover completely, according to UN estimates.< /p>

In 2016, the Kigali agreement also provided for the phasing out of hydrofluorocarbons (HFCs), gases that are extremely harmful to the climate and used in refrigerators and air conditioners. If the agreement is respected, it could reduce global warming by 0.5°C by 2100, experts have already estimated.

However, the latter also looked for the first time at the potential effects on ozone of geo-engineering projects intended to limit global warming, warning of their undesirable effects.

The idea would be to intentionally add suspended particles in the stratosphere to reflect some of the sun's rays. One of these projects would involve injecting a considerable amount of sulfur particles into the upper layer of the atmosphere.

These technologies would somehow replicate a volcanic eruption similar to the Pinatubo in the Philippines in 1991, which lowered the temperature by 1°C.

But the ozone level was affected during the years that followed. follow-up, notes John Pyle, co-chairman of the scientific panel working on ozone for the UN.

An injection of particles into the atmosphere “could result in a serious drop in the level of ozone,” he warns. “There are a lot of uncertainties,” he said.

The planet has gained nearly +1.2°C since the pre-industrial era, already leading to an increase in heat waves, floods or storms.

The international community has undertaken to limit this warming well below +2°C, +1.5°C if possible. But current policies point to a temperature rise of 2.8°C by the end of the century, well above the limits of the Paris agreement, according to the United Nations.

Geoengineering projects are sometimes put forward as a solution to save time, but scientists have already warned of the dangers associated with these technologies.

Intentional modification of solar radiation could for example disrupt the monsoon pattern in South Asia and West Africa and thereby destroy the crops on which hundreds of millions of people depend, according to previously published studies.

What if changing the radiation ended “for some reason, it is very likely that the surface temperature would increase rapidly”, estimates the IPCC.

An injection of particles over Antarctica was simulated, with mixed results. This would certainly reduce the global temperature by 0.5°C over twenty years, but the hole in the ozone layer would return to levels close to those of the 1990s.

“The most easy to do is to stop releasing greenhouse gases into the atmosphere,” said John Pyle. “And it's difficult.”