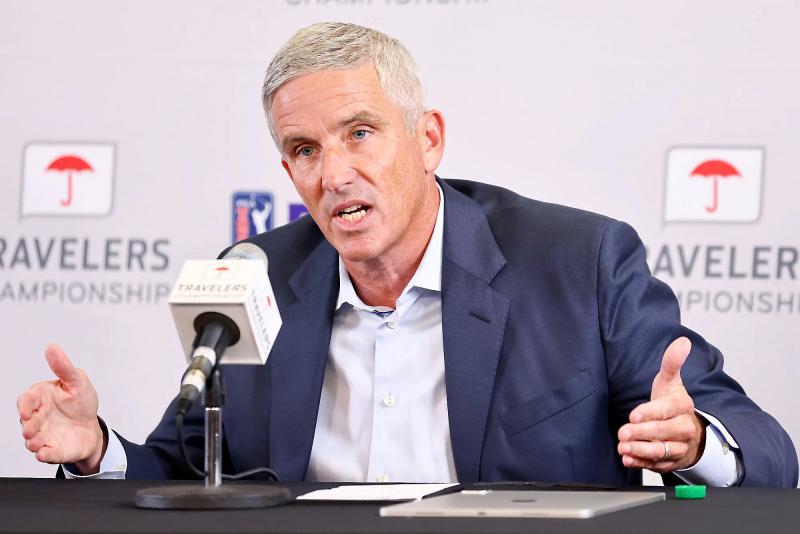 Money has been raining in the world of golf for several weeks. In response to the astronomical sums offloaded by Saudi league executives LIV Golf, the PGA Tour today announced a new Fall Series and increased purses across eight tournaments.

This is what Jay Monahan, the commissioner of the PGA Tour, announced today at a press conference on the sidelines of the Travelers Championship. All this while at the same time, LIV Golf announced the capture of Brooks Koepka, 19th golfer in the world.

We knew that war had been declared for several months between the best circuit on the planet and this controversial competing league. By pledging tens of millions of dollars from Saudi Arabia's Public Investment Fund, the leaders want to bring chaos to the global golf ecosystem.

In his opening remarks today, Monahan made it clear that he could not follow suit by pledging astronomical sums.

“If this is an arms race and the he only weapon is the dollar, our circuit cannot compete against the sovereign fund of this monarchy which spends billions to buy our sport. »

However, in a meeting with its members on Tuesday, the commissioner made it known that he will increase the purses of eight tournaments from next season.

Among the most significant, the Genesis and Arnold Palmer invitations as well as the Memorial and the Dell Match Match Championship will increase from $12 million to $20 million. The Players Championship will jump from $20M to $25M while the purses for the first two stages of the FedEx Cup qualifiers will be set at $25M rather than the $20M in 2022.

If he says he is unable to defend himself against the gold-filled coffers of the Saudi regime, Monahan is extending a total of $54 million in the distribution of these purses. This is a defense mechanism to counter the exodus of golfers to the LIV Golf league.

He also announced an overhaul of the regular schedule which will run from January to the end of August from the 2024 season. The three playoff tournaments will follow.

As of next year, the first stage of the playoffs will be reserved for golfers in the top 70 rather than the top 125 as is currently the case. But the top 125 golfers will retain their privileges for the following season.

In addition to these new features, there is an “international fall series” reserved for the top 50 golfers in the final FedEx Cup standings. The three events could be played anywhere on the planet in the fall of 2023. Their format remains to be determined, but we know that they will offer prize money as attractive as the biggest tournaments on the calendar.

Asked if he plans to revise his exclusion policy for athletes who commit to the LIV, Monahan remains on his position of June 9. Those who are bewitched by these millions are banned from the circuit.

He also said he was very disappointed with the behavior of Koepka who trumpeted loud and clear recently that he would not accept the offers of the Saudis. This afternoon, the quadruple major champion passed… to the east. He will also participate in the first tournament on American soil scheduled for Portland next week. This ad led to shock statements. The man who has been slinging for weeks and who is a great ambassador for his PGA Tour, Rory McIlroy, finds it difficult to explain this sudden change of direction.

“It's quite deceitful of the from these players to say one thing in public and in private and do another thing,” he said.

Mexican Abraham Ancer has also signed up with LIV Golf. Young star Collin Morikawa said he remains among the world's best on the American circuit.

The Royal and Ancient (R&A) of St. Andrews today announced that they will accept dissenters now playing in LIV Golf, a league not recognized by the World Rankings, at the next Open presentation. British. However, he did not specify his colors for the future.

LIV Golf seeks to be recognized by the leaders of the world rankings, whose big boss is the former big boss of R&A, Peter Dawson.

If the tournaments of this new league are not recognized, golfers will not be able to earn points to maintain their rank in the world ranking.

The one- this is used by the four Grand Slam championships to determine the plateau.