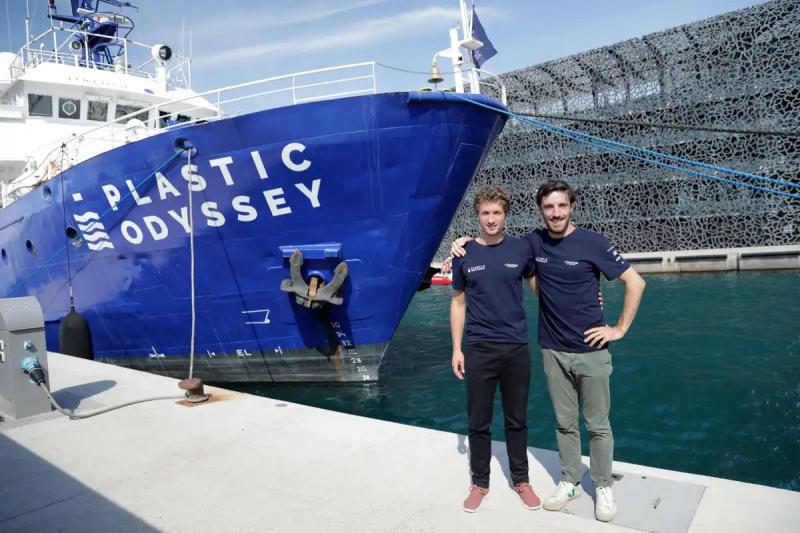 Its mission, to find solutions to reduce plastic pollution in the 30 countries most affected by this phenomenon: aboard its ambassador boat, the Plastic Odyssey expedition will cast off in Marseille, in the south of France, on October 1 for a three-year expedition.

It was while traveling the seas that Simon Bernard, merchant navy officer, president and co-founder of company, realizes the extent of the damage caused by plastic, “of which 20 tons are poured into the ocean every minute”, the equivalent of a garbage truck.

In 2016, the Plastic Odyssey project was born with the ambition to “stop this leak”, in his words.

“It is not a ship to clean the ocean, but a ship demonstrator of solutions”, explains the young man during the presentation of the expedition in Marseille on Friday.

Noting that 80% of the plastic waste polluting the oceans comes from coastal areas, the 20 crew members will target “the 30 cities in the world that are the most crumbling under this waste, in particular because they lack treatment infrastructure”, describes Simon Bernard.

In Southeast Asia, Africa and South America, Plastic Odyssey wants to train 300 entrepreneurs in recycling waste into solid and useful objects, such as cobblestones, piping , thanks to simple and robust machines, whose plans are accessible in open-source.

Beyond recycling, Plastic Odyssey will provide during each stopover, as in Marseille all weekend, awareness campaigns on the necessary reduction of plastic in our daily lives.

“We do not want to spread the message of saving technology to the general public”, explains Maïté Abos, director of the association, “because we cannot do without thinking about + how to do without plastic?+”. A “fantastic material, very strong and durable but which is used for single use, very polluting”, she laments.

Aboard the Plastic Odyssey, visitors from all over the world will be able to observe the machine tools but also visit a “zero waste and zero plastic” living space.

The Plastic Odyssey, 40 meters long, is powered by plastic waste, thanks to a pyrolysis system, and thus self-sufficient in energy.

Asked by AFP about his partnership with the shipowner CMA-CGM, Simon Bernard highlighted the multinational's recent decision, “in June, to stop the export of waste, which is really a step towards reducing plastic”.