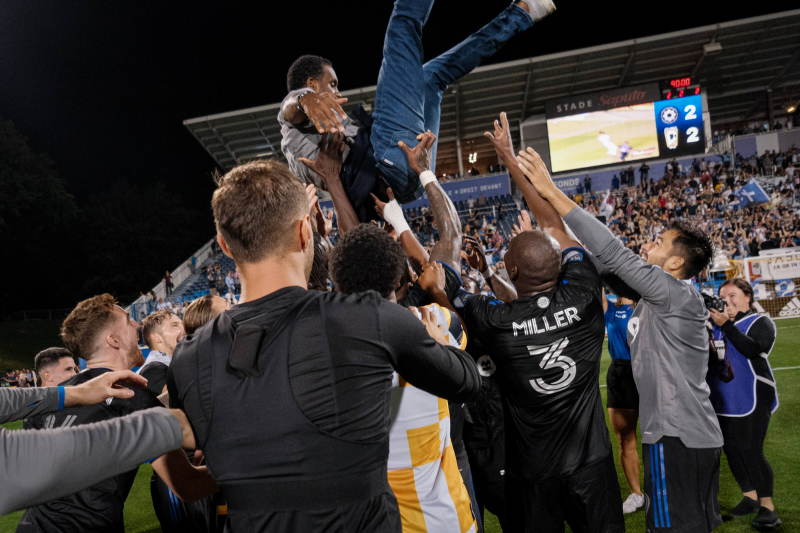 The few players who took part in the end-of-season review went there to plead for a return of Wilfried Nancy.

Among them, Djordje Mihailovic is the one who offered the most vibrant tribute to the one who helped him grow into a man over the last two seasons.

“He is like no coach I have had in the past. He understands people, he takes time. During my first weeks here, I needed to mature and he understood that.

“He understood me like no other coach and that's what helped me the most to progress as a player.”

We noticed it all season, the atmosphere was good within the group. The players worked hard, sure, but they mostly did it with a smile and that's Nancy's handiwork.

“My first impression was of a very humble and down to earth man. -down. He is very laid back and laid back. He loves the game in a wonderful way,” said Alistair Johnston, who arrived last winter.

Samuel Piette, who has known Nancy for more than ten years, brought up an interesting point when talking about what her coach has brought to the club.

“It's the feeling of being good at a club, in a locker room, not to play while always feeling judged by a coach. Apart from Mauro Biello, it's something I've always felt in other coaches.”

“Everyone wants Wilfried to stay. He has changed almost everything at the club since his arrival, his philosophy is important for the group,” added Kamal Miller.

We understand better what Piette means when we ask Nancy to explain the philosophy he implemented when he arrived in 2021.

For him, there is a value that is at the heart of his concept and he don't give up.

“Trust. Without it, we cannot move forward. The players have given us the opportunity to have that confidence and there is a natural confidence that has taken hold and that is essential.

“My way of playing doesn't come from another planet, it's completely normal, but I have strong convictions.”

But if we want to dig into the details, we must admit that the implementation of his game philosophy, focused on possession and offensive construction from the 'back, took a while to set up.

This is completely normal since it is a way of playing that is very effective, but counter-intuitive. Alistair Johnston has often mentioned that he must have forgotten everything he knew when he arrived in Montreal.

“Playing in this system really challenged me to discover new frontiers. It was a great springboard for me on the offensive level.

The Canadian fullback also underlined the way in which this philosophy of play was implemented effectively.

“We saw the growth between year one and year two. If he comes back, we will be very excited, but if he leaves, we wish him good luck and I don't think anyone will blame him.”

As the players went to the podium before Wilfried Nancy and Olivier Renard, they were questioned a bit as if Nancy had left. That said, it's still not entirely clear if he's staying.

In the event that he chooses to try a new adventure, who could replace him with? Maybe we should look inside.

“It could be the best solution because there would be continuity, but it is not because a person is an assistant that he necessarily has the same ideas”, warned Samuel Piette who understands the interest that elicits Nancy from other MLS clubs.

“I'm not surprised, it's the Crew, Houston or another MLS team. Several teams would like to have a coach like Wilfried Nancy and Montreal too.”

Victor Wanyama is one who seemed to be leaving since he confirmed a few weeks ago that he would not be back in 2023.

However, his speech had changed when he made the review of the season and it may well be that his statement was a gamble.

“I'm going to take a vacation and I'll look at my options with my family and then we'll see. I have discussed with the club and I have not made a decision yet.

Pressed to clarify, the 31-year-old veteran then indicated that he was to meet his agent today to discuss the continuation.

Wanayma received three million dollars this week, but a return would be made certainly at a lower cost. At his age, he could be tempted to land one last big contract in Europe.

Canada and the Cup

Alistair Johnston and Kamal Miller are in on it two others who could flirt with Europe if they have a good World Cup with Canada.

“For all players, the World Cup is the window to Europe,” Johnston said. At the same time, I don't think about that when I play for Canada, I just think about winning the match for my country, “he argued in very correct French before continuing in English to avoid misunderstandings. to express.

“I've always had aspirations to play in Europe and I've always been clear about it, it's a dream. This club has given me a great opportunity and I appreciate my time here. No matter what happens, I'll be a winner.”

What we know is that the team will have a different face in 2023 and Samuel Piette knows it too.

“I would have liked to cut and paste next season, but there are players who have even bigger goals. Like Djordje, the transfer was the thing for him.

“You don't want to change a winning formula, but you have no choice. It's unknown, but when Wilfried arrived it was also unknown and we see what happened.”