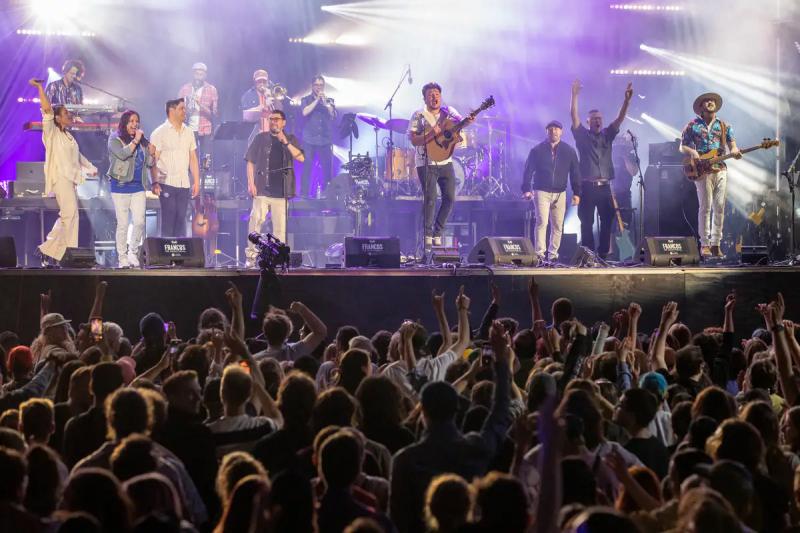 Last Monday, I went to see the show by Émile Bilodeau and his guests at the FrancoFolies de Montréal.

I came away changed.

With thousands of people, I attended a major music performance. Émile Bilodeau sang his greatest hits and invited Indigenous artists to perform with him.

He dedicated his show to Joyce Echaquan.

Scott-Pien Picard, Laura Niquay, Elisapie Isaac, the Maten group, Émile Bilodeau and his band proved to us that mixing cultures is so powerful.

I'm not a big fan of music shows, but this time was different. For the first time, I felt what young Justin Bieber fans can feel. To the sound of Scott-Pien Picard's guitar, I got carried away like never before. Elisapie Isaac's throat singing made me vibrate more than anything.

I already knew it, but this show put me back in the face that we've been missing it for too long of the richness of indigenous cultures.

During the show, Émile Bilodeau proposed the following idea: why not teach an indigenous language to young people in elementary and secondary school?

I didn't find that mad. Like Émile, I believe that non-Native people, young and old alike, would benefit from being more often in contact with the cultures of the Aboriginal nations.

Being interested in these languages, these musics, these artistic expressions are nourishing for all. By becoming aware of the range of experiences with which these exchanges can enrich us, we thumb our noses at ignorance.

More Aboriginal music on the radio, more representatives of the 11 Aboriginal nations Quebec on TV, for example, it seems to me that it's not complicated.

We all have to gain!