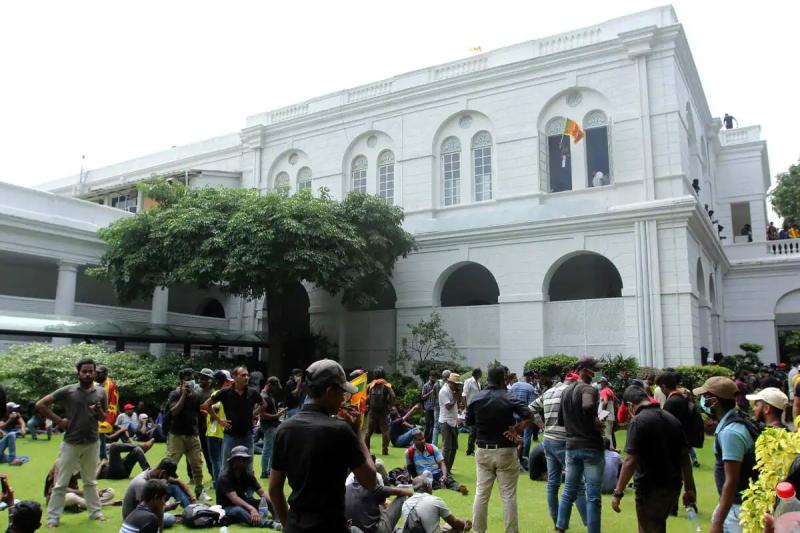 Sri Lanka's President Gotabaya Rajapaksa fled his Colombo palace on Saturday minutes before it was stormed by hundreds of protesters accusing him of being responsible for the catastrophic economic crisis that the country is going through and wanting to oust him from power.

Prime Minister Ranil Wickremesinghe, who is next in line if Mr Rajapaksa resigns, immediately called an emergency cabinet meeting to discuss a “swift resolution” to the crisis. In a statement, he invited the leaders of the political parties to join this meeting, and also asked that the Parliament be convened.

“The president has been escorted to a safe place”, indicated a Defense source to AFP. “He is still the president, he is protected by a military unit,” added this source, according to which the soldiers guarding the official residence fired in the air to dissuade the demonstrators from approaching until Mr. Rajapaksa be evacuated.

Local television channels showed images of hundreds of people climbing the gates of the presidential palace, a colonial-era building by the sea that is a symbol of power in Sri Lanka.

Some Protesters streamed videos live on social media showing a crowd milling around inside the palace, some even taking a dip in the presidential swimming pool or lying amusedly in the bedrooms of the residence. /p>

The protesters also took over the offices of the presidency, located nearby and in front of which demonstrators have been camping for three months.

Government officials said ignoring Mr. Rajapaksa's intentions after his escape. “We are awaiting instructions,” a senior official told AFP. “We still don't know where he is, but we know he is with the Sri Lanka Navy and is safe.”

Private TV channels showed a convoy of official-looking vehicles at Colombo International Airport, but no confirmation of Mr Rajapaksa's possible departure from the country was provided.

Tens of thousands of people had earlier taken part in demonstrations to demand the resignation of Mr. Rajapaksa, held responsible for the unprecedented crisis which is hitting Sri Lanka and causing galloping inflation as well as serious shortages of fuel, electricity and of food.

In particular, the United Nations estimates that around 80% of the population is skipping meals to cope with shortages and the outbreak prizes.

The security forces tried to disperse the huge crowd gathered in the administrative district of the capital. The main hospital in Colombo reported three people injured by gunshots and 36 others suffering from breathing difficulties due to the massive use of tear gas.

On Friday, the police imposed a curfew to try to discourage protesters from taking to the streets. But the measure was lifted after threats of legal action against the police chief were made by opposition parties, human rights activists and the country's bar.

The curfew had been largely ignored by protesters anyway, some of whom even forced railway authorities on Saturday to take them by train to Colombo to take part in the rally, officials told AFP.

“The curfew has not had a deterrent effect. He actually encouraged more people to take to the streets in defiance,” the defense official said. “Passengers requisitioned trains to reach Colombo”.

Even though the country has almost exhausted its meager petrol reserves, the protesters, supported by the main opposition parties, have also hired private buses to travel to the capital.

According to the authorities, some 20,000 troops and police had been dispatched to Colombo to protect the president.

The UN had urged Sri Lankan authorities and protesters to ensure Saturday's rallies were peaceful .

As of May, nine people were killed and several hundred injured during unrest in the country.

Sri Lanka defaulted in April on its $51 billion foreign debt, and began bailout negotiations with the International Monetary Fund.

This crisis, on a scale unprecedented since independence from the country in 1948, is attributed to the Covid-19 pandemic which deprived this island of 22 million inhabitants of the currencies of the tourist sector and was aggravated ed by a series of bad political decisions, according to economists.