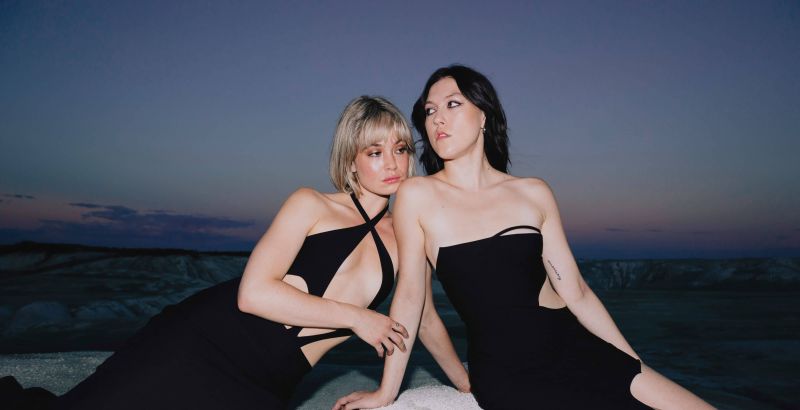 What to listen to through all the news? Charles Laplante and Mélissa Pelletier from QUB musique point out 5 must-haves!

The year is off to a strong start with this new EP from Mayfly, a promising Montreal duo made up of Charlie and Emma. The 22-year-old artists may be taking their first steps into the music industry, but they display impressive confidence through the tracks on HIDEWAY Vol. 1., which also benefited from the creativity of Jules Bonneville-Coulombe. The intro SINKING, very dark, is already intriguing by showing the explorer side of Mayfly. On seven electro-pop songs with a very polished aesthetic, Charlie and Emma prove again, after their first EP Essence, that their strength lies in their sensitive voices which respond to each other and combine wonderfully. An important foundation, if not necessary, which allows them to deliver their emotions in a touching way, as well as their fight against mental health problems. If the whole thing is rather sad, Mayfly manages to lay very danceable Take Me Away and Passenger Seat. It would not be surprising if artists find many ears outside Quebec. (Mélissa Pelletier)

Dying of Everything – Obituary****

If the 2017 self-titled album is universally recognized as the best album by the Obituary pioneers since the early 1990s, this 11th album is the logical continuation. Everyone is in good shape, especially the eldest John Tardy and his eternally vomiting voice. We have a pain in the neck by dint of nodding our heads following the dark, aggressive and precise assaults. The opus even dares to become more energetic towards the halfway point. In short, very good death metal with Obituary sauce as we like it. Their sound is so distinct that they will never need to try to reinvent the wheel. (Charles Laplante)

After revealing rooms Place Parvis and The Tide go uplast fall, musician Alex Doré finally presents the rest of his album! We discover a melancholic and vaporous universe coated with acoustic guitar and rich electronic arrangements, but above all with this delicate and warm voice that talks to us about love and travels, among other things. Accompanied by multi-instrumentalist Charles Robert, the artist was able to distill most of her talent as a songwriter into six very good songs. Only downside: it’s concise and we would have taken more! (Charles Laplante)

With her novel-worthy background and songwriting credentials long and inexplicably snubbed by the Nashville country scene, Margo Price is quietly becoming one of the genre's most relevant voices. On this fourth album, where she adopts more southern rock and pop influences, she reminds us of the Sheryl Crow of the mid-1990s. of sun evoked by the atmosphere of Landfill, here we are in the presence of a very good mainstream country album. (Charles Laplante)

While in Paris with Hibou, the American Peter Michel decided to move there and write pretty folk pieces in French for the Éclo project. The end for Owl? The release of Arc reassures us: not for now. Despite its vaporous side, the five-piece offering cuts straight to the chase, opening with the mesmerizing single Night Fell, surely the most effective of the lot. Between frenzy and melancholy, the guitar becomes the foundation of the universe tinged with shoegaze and dream pop. With a certain gift for contemplative melodies, the artist here offers us excellent excuses to daydream. (Mélissa Pelletier)