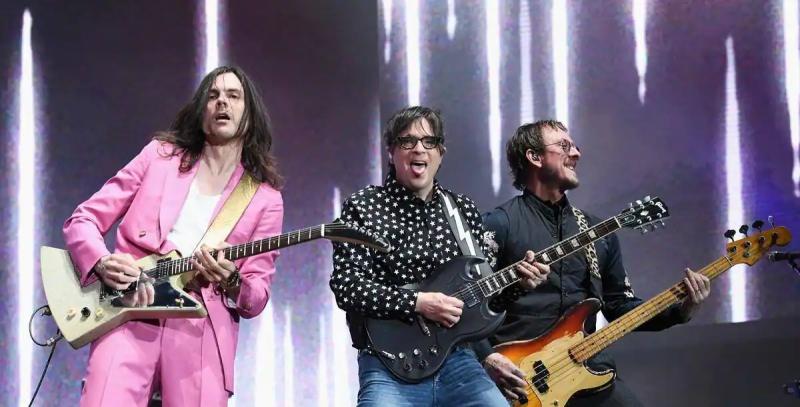 Weezer continues his seasonal quest by allowing himself some backtracking. We really have the impression of hearing the Blue Album en listening to the first two songs, with the unstoppable mixture of pop arrangements and heavy riffs that made Weezer famous. Subsequently, the group almost got bogged down with What Happens After You? We borrow a bit from the vibe of Franz Ferdinand and Bloc Party, but even more radiophonic. River Cuomo's pop obsessions can also be detected on each of the titles. Run, Raven, Runborders on self-parody and children's music without completely drowning its second degree. Luckily, the guys didn't put their guitars away. It helps digest the creaming of some hooks. Francesca would almost sound like ABBA if it weren't for the distortion. Perhaps not an album that will reignite feuds or even tensions between old and new Weezer fans. We won't complain. And despite the imposed autumn theme, some sunny tunes manage to pierce the clouds. Alone Taste the Pain, with these Queen-style flights, exudes a certain melancholy. (Stéphane Plante)

Because the time has come – Bruno Pelletier ***

After 40 years of career, one thing is obvious: Bruno Pelletier has talent. And this opus with balance tunes, created almost exclusively by him, pays tribute to these beautiful years. If we can not blame the flawless execution of the artist, who always impresses with his vocal prowess, we can however be bored nicely through this very clean universe. But beware: Pelletier does not shun a few uneven explorations, as in Not all the samewho flirts with the spoken word, on well-trodden paths that address, among other things, doubt, family and desire. Guaranteed fun for the fans. (Mélissa Pelletier)

The piece Vestiges, both in words and sounds, raised expectations for this new opus from the New Brunswick singer. Caroline Savoie lives up to her promise with her feverish melodies hummed to overflowing folk with parsimony on the rock side. Corail also reveals his concern for strong images: “I have known deserts but never like the ones you dug for me…” White Noiseseven takes a very 90s indie rock detour with L’angle mort. With more audacity in the instrumentation. (Stéphane Plante)

The culture of worship – Orloge Simard * **

From the outset, the title track, an incantation à la Claude Gauvreau, shows that these Bairiverians spare no one. Over the course of 11 tracks supported by skilfully executed stoner chord progressions, Orloge Simard pours out uncensored Gauloiseries (the word is polite) that will scratch many. To balance it all, sometimes we are entitled to puns like “I sold droye, all styles of capsules (sic)… What poked the most was the René in capsules”. (Stéphane Plante)

The pleasure of listening to Re effis found especially in his lyrics, which are good to see unfold with joyful absurdity. It's that the one that can also be heard within Aquaserge alongside Julien Barbagallo (Tame Impala) used the technique of cut-up, from his own texts and books from his library. Whimsical, funny, quirky… These words are not far from the musical universe of the sympathetic dandy who affirms his talent as a singer-songwriter with pleasant simplicity, and even a certain minimalism, on a piano that dominates pop pieces with jazz accents. (Mélissa Pelletier)