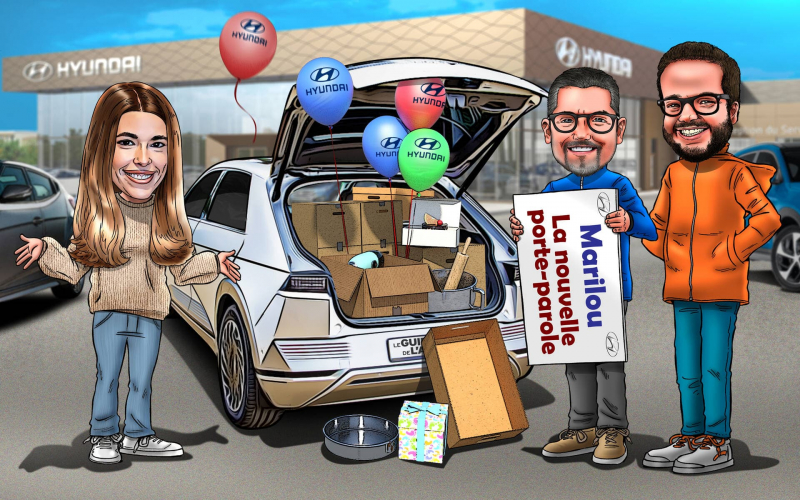 In recent days, Hyundai has presented the brand's new spokesperson. Indeed, the Korean manufacturer has chosen Marilou as its headliner.

This announcement came almost a year after Hyundai terminated its contract with Guillaume Lemay-Thivierge due to their vaccination status.

As part of the Le Guide de l'auto program on QUB Radio, Antoine Joubert and Germain Goyer discussed the appointment of this singer and businesswoman as spokesperson for the Hyundai brand. They also took the opportunity to define the role of a spokesperson and to insist on its importance for the Quebec market.

A good choice according to Antoine and Germain

Guillaume Lemay-Thivierge will have been, successfully, spokesperson for Hyundai for 13 years before the end steep as we have known.

While Marilou was in her infancy with the brand, Antoine immediately stated that “she is popular in Quebec at the moment. It is a very fair choice, very thoughtful and which is the opposite of the one we are replacing.

For his part, Germain gives the chance to the runner since this is Marilou's first involvement in the automotive industry. He notes, of course, that it is “a personality much appreciated by the general public”.

The examples of success are numerous

To conquer the Quebec automobile market, many automobile manufacturers call on or have called on a spokesperson to represent them. While the benefits are great, there is also an element of risk. “The biggest challenge is not only to have a person who will represent the builder well, but who does not have skeletons in the closet”, explains Antoine. We will remember, for example, that Buick had suspended the contract with Maripier Morin in July 2020 following a series of allegations. On the other hand, it must be recognized that it participated in the success of the Buick Encore in Quebec.

However, there are many success stories in this universe in our province. Just think of André-Philippe Gagnon with General Motors, Martin Matte with Honda or Marie-Soleil Tougas with Toyota.

While Mélissa Désormeaux-Poulin, Mariloup Wolfe, Karine Vanasse and Marc Dupré roll their bumps with Kia, Chevrolet, Nissan and GMC respectively, Antoine and Germain also refer to the appointment of Pierre-Luc Funk as Volkswagen spokesperson for Quebec last December. This is a first for the German manufacturer.

A bit of speculation

In a burst of speculation, Antoine and Germain go there some suggestions of spokespersons that they would naturally associate with a manufacturer: Martin Petit and Subaru, Louis Morissette and Mitsubishi, etc.

< p>The show also discussed the unveiling of the new Maserati GranTurismo, the approval of Rivian vehicles in Canada and the inconsistency of government credits for the purchase of electric and plug-in hybrid vehicles. < /p>

Antoine Joubert and Germain Goyer give their thoughts on the recently tested 2022 Ford Maverick and Hyundai Ioniq 5 2022.