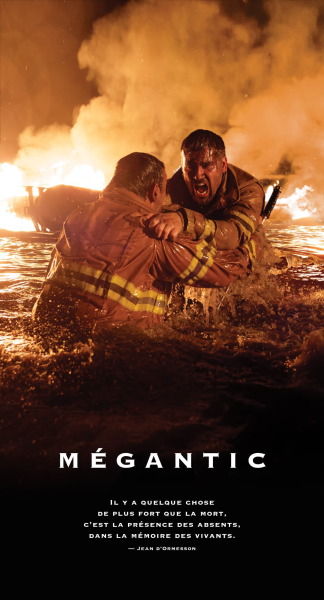 The trailer for the “Mégantic” series unveiled on Monday plunges us into the heart of the train tragedy that killed 47 people on July 6, 2013 in the Estrie municipality.

It shows that the quiet life of the people of Mégantic was completely disrupted during the derailment that occurred in the middle of the night in the Musi-Café sector, in downtown Lac-Mégantic, where many victims were gathered.

The screenwriter of “Mégantic”, Sylvain Guy, told Agence QMI that this high-calibre production, which required more than a year of post-production to produce the special effects and sound effects, recounts “the loss of our little daily life. The entire population of the place remains scarred at different levels, some not recovering from the horror generated by the explosion and fire of numerous wagons carrying more than seven million liters of crude oil.

In the trailer, we find ourselves at the Musi-Café while an evening like the others is in full swing. The regulars are enjoying themselves and the good mood reigns inside as well as on the terrace, until the wagons start to spin at high speed, right next to the bar, and derail, causing the worst railroad tragedy in Canadian history.

We see people scrambling, firefighters trying to contain the flames and loved ones consumed with worry , who rush to the city center, ravaged by flames and successive explosions. The sappers hose down the cars that have not yet exploded by the 72 that have derailed, this in order to save what is left of the city of 5600 souls.

The series focuses, among other things, on the heroism and courage of several Méganticois who prevented the worst. A character portrayed by Bruno Marcil yells at a firefighter: “I have my wife, I have my brother, I have my sister-in-law, I have my friends who are there, I will not sit idly by , send!”, words that are overwhelming knowing that they represent the reality of many Méganticois who lost loved ones almost 10 years ago.

We also see in the trailer the repercussions of the drama of Mégantic, all the people who lived the drama not leaving without psychological consequences. The firefighter played by Joakim Robillard said, long after the tragedy: “I hear voices sometimes, cries, howls, from the prisoner world, from the burning world”.

The written series finally tells what Quebecers didn't see on TV as the drama played out, over several days and weeks. It is dedicated to Méganticois, but is not intended for them, knowing that it will undoubtedly be difficult to watch by witnesses and relatives of the victims.

It's ALSO, Sophie's production company Lorain and Alexis Durand-Brault who produces “Mégantic”, the latter also being the director. The series will be available from February 9 on Club illico.