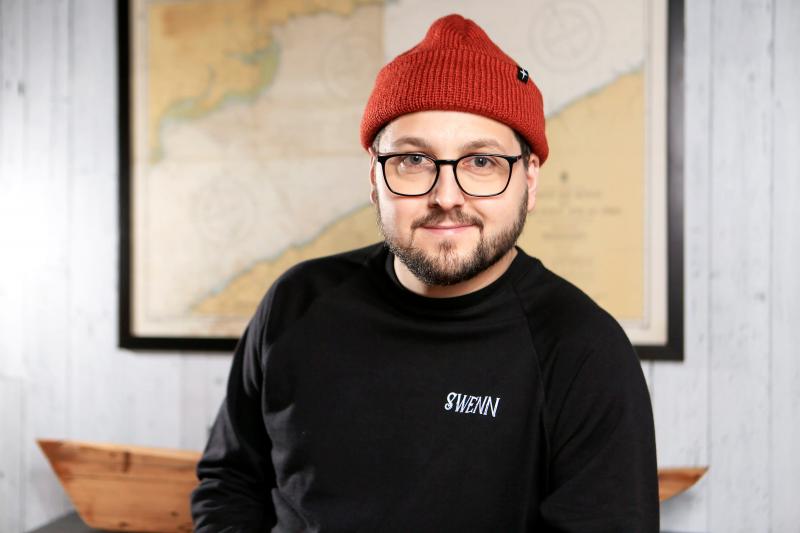 Historian, author and lecturer Samuel Côté has always been fascinated by Quebec's maritime past and has unearthed several shipwrecks and documented several shipwrecks. He has held the helm of four television series, including Cwreck hunters. This summer, he pushes his exploration even further by offering the first volume of a novel series starring Éloi Fortier, a shipwreck hunter. Through a great quest, the maritime universe of the St. Lawrence and its sunken secrets are highlighted.

Yves Dumoulin, a retired taxi driver who collects lots of artefacts and old things, contacts the famous shipwreck hunter Éloi Fortier to present his case. He wishes to understand what really happened to his great-great-grandfather, Joseph.

Family folklore has always perpetuated the myth of this naval mechanic, but a yellowed notebook, found by chance , leads the duo to the cemetery of Métis-sur-Mer. The two men are then drawn into a perilous scuba dive. Will the shoals of the St. Lawrence have something unusual to reveal to them?

Interviewed while preparing to shoot programs in the cold waters surrounding the island of Newfoundland, Samuel Côté explains that he wanted to go even further in describing his work as a wreck searcher by writing this thrilling first novel like his TV series.

The transition to fiction is interesting and Samuel Côté has all the knowledge to tell good stories with a maritime atmosphere.

“From the start, I had the guidelines and I knew where I wanted to go with my characters. But I also wanted to reveal parts of my methodology, which I don't necessarily do in my TV projects, because we don't have time to do it. »

He can therefore enter more into the daily life and into the detail of his job as a wreck hunter. Éloi Fortier is his alter ego, in some respects, he assures.

“He has his qualities and his faults and that looks a lot like me. I found it interesting to show a bit what the work of a marine investigator is. I don't see myself as an investigator who will solve crimes, but my methodology will look a bit like that.

In TV shows, he doesn't have time to develop the subject, for lack of time. With the book, he can do it. The novel demystifies his work and unveils details, reveals the human behind the adventure.

“On a daily basis, Éloi Fortier lives adventures and meets people, and that, I also do in life. I like to develop good relationships with interesting people. ”

The story of Yves Dumoulin, who finds an old notebook, is purely fictitious.

“  On the other hand, throughout the novel, I was inspired by lots of stories that I experienced or heard and I transformed them. I thought of shipwrecks that have happened in my area. ”

Samuel Côté has a very particular vision of the St. Lawrence, a complex waterway, difficult to navigate, full of stories.

“ The St. Lawrence is my friend , my neighbour, my playground. You could even say it's my livelihood, in a way. I know its potential, but I can't say that I know it completely. We will never know all that is hidden there. ”

“A large part of our history is at the bottom of the water,” he adds.  ;

“I see the St. Lawrence differently from people. Yes, it is dangerous to navigate. It is believed to be probably one of the most difficult waterways to navigate in the world. »

“ The two fellows run back to the hatch, but a single glance at the ladder dissuades them from going down. It is too late: the water has invaded the hold, imprisoning the rest of the crew. Some did not even have time to wake up, drowned in an instant. Others gurgle howls, in vain. Their muffled voices reach above, a fleeting echo in the night air, a distant sound among the creaking of the split hull. Then the silence of the water. The captain heads for the wheelhouse and meets a young recruit whose name he has forgotten. — Untie the lifeboats. Right away! »