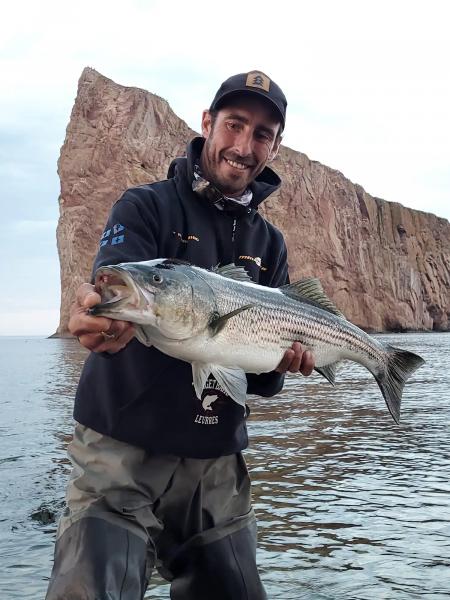 Sport fishermen have reason to rejoice, because striped bass, which disappeared from the St. Lawrence River 50 years ago, are now abundant thanks to a “special operation”. started at the turn of the millennium.

” Lack of reliable scientific data, it is difficult to know precisely the number of individuals swimming in the St. Lawrence, but the species is obviously in good health,” says biologist Pascal Sirois, professor at the University of Quebec at Chicoutimi and director of the Research Chair in Exploited Aquatic Species.

Before landing on your plate, this black-streaked silver-sided fish had disappeared from the waters of the river at the end of the 1960s. Yet it was abundant for decades.

“It is believed that commercial overfishing and human activities such as the dredging of the seaway and the construction of Expo 67 have destroyed the striped bass populations of the St. Lawrence,” says Professor Sirois.

Thanks to New Brunswick

At the initiative of the Quebec Federation of Hunters and Fishermen (FQCP), biologists organized a campaign to reintroduce the striped bass at the turn of the millennium.

Operation Rebirth involved the release of 3,500 adults from the expanding Miramichi River population in New Brunswick. Some 34 millions of larvae and 17,000 juveniles were added to carefully protected breeding sites between Sorel-Tracy and Île d'Orléans.

«  The reintroduction is a great success for the Federation”, comments Ernie Wells, hunting and fishing columnist for the Rimouski newspaper Le Soirand host of the radio show Rendez-Vous Nature.

He believes that the population of the St. Lawrence has recovered enough to allow sport fishing in the western part of the river. , where it is currently prohibited.

The St. Lawrence striped bass is still on the list of threatened or vulnerable species under federal jurisdiction. However, the population of the Miramichi River, whose fishing is authorized, colonized the St. Lawrence estuary via Chaleur Bay. Today, the two populations have mixed, but fishing remains prohibited west of the “imaginary line from Rimouski to Forestville”, explains Mr. Wells.

”  It's a combative fish that gives us strong emotions with each catch,” enthuses Guillaume Dumas, a fisherman from Quebec who travels the continent with his line, looking for the best sites.

It was by accident that he caught one of these large scaly fish in 2009. He put striped bass at the top of his list of the best sport fishing species. Since  2016, he has been catching them every year.

And it's delicious, too says this professional cook who prepares his white, firm meat [not overcooked], with salad and salsa.