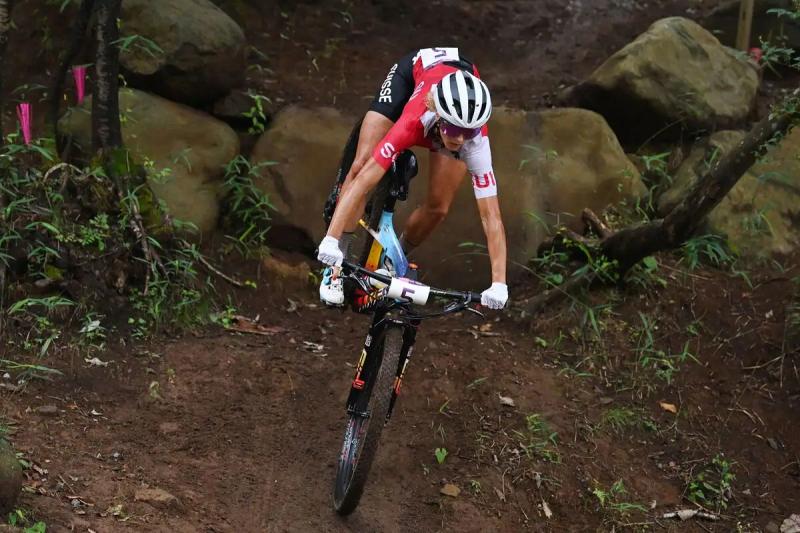 During the first day of competitions of the 30th edition of the Vélirium, Friday at Mont-Sainte-Anne, two cyclists from Switzerland took top honors in the short track cross-country races.

In the women's competition, Jolanda Neff finished first ahead of American Gwendalyn Gibson and her compatriot from Switzerland, Alessandra Keller. Only.13 seconds separated the first from the seventh position.

Quebecer Laurie Arseneault tried hard to keep up with the pace of the leading peloton at the start of the race, but she had to change her mind, before finally finishing in 18th position.

“I start behind all the time and I still have some catching up to do, explained Arseneault, a few minutes after the race. I tried to stay with the leading group, but it didn't work. Due to the lactic acid, I had a hard time keeping the beat. I came up a bit towards the end, so I'm happy.”

Quebecer Cindy Montembault was unable to keep pace, which prevented her from finishing the race.

On the men's side, a field of 15 riders continued from start to finish. Thanks to his race management, the Swiss Filippo Colombo took the lead at the end of the race to overtake the Mexican Jose Gerardo Ulloa Arevalo.

“We couldn't have started the weekend better. I tried to manage the effort, without being in first position. […] You have to know how to manage your energy and know the right moment to attack, ”suggested the winner, who overtook the Mexican on the last lap.

For his part, Léandre Bouchard was exhausted after his race. The Almatois finished in 26th position.

“It’s very breathless, said Léandre Bouchard. I gave it my all and was pretty dizzy at the end. I managed to get out of my comfort zone and that's what we want. I feel that I am gaining ground. This is my fifth consecutive race weekend and each time it gets better and better. I hope to be even better on Sunday.”

“I am satisfied. I said at the press conference that I wanted my legs and ears to hurt [because of the encouragement from the spectators] and I think I have realized that so far,” concluded Léandre Bouchard with a smile. .

As for the downhill competitions, on Saturday, 22-year-old Canadian Finn Iles will try to continue to surprise, after finishing in first place in qualifying.

Patience is key for Laurie Arseneault

Quebec cyclist Laurie Arseneault continues her development, a process that could soon lead her to the world's elite, according to her coach.

After a 12th place finish on July 31 in Snowshoe, West Virginia , the athlete from Terrebonne finished in 18th position during the UCI World Cup cross-country race on short circuit, Friday, at Mont-Sainte-Anne.

“Of course I always want to perform better, but honestly I take this experience and I will put it in my backpack. I'm sure it will go better the next time,” said the main interested party after her race.

“It's a long-term process,” she said.

Before the race, his trainer, John Malois, affirmed that his 25-year-old protege has all the tools to reach the world elite in the next few years.

“Last year was new for her, but this year she's stepping into her shoes and stepping up,” he said. I think she can become one of the best in the world in four or five years.”

“She is progressing from race to race,” continued the coach. […] According to the training plan, I wanted to start the season gradually to finish strong in July and August and that is what we are accomplishing.”

< strong>Not a question of results

The athlete stands out thanks to his passion and discipline in his quest to achieve excellence.

“His passion for the sport impresses me, noted John Malois. She will give it her all. She follows the training programs to the letter. It's “fun” working with her and she is very grateful. He's a good person. It makes you want to help him.”

Malois took part in the Barcelona Olympics in 1992 at the age of 21. By his own admission, he wanted to be successful too quickly, which caused him to experience a major drop in diet afterwards.

The coach wants to use his experience to prevent the error does not repeat itself. In the case of Laurie Arseneault, he wants to make sure to take it one step at a time. In this context, the results are somewhat secondary.

“I want the athletes to have fun, without putting too much pressure on themselves,” he said. That's what I notice about Laurie, she enjoys riding. It's his passion. [Friday] we didn't even talk about positioning. We had dinner together on Thursday and we know we are ready. If it doesn't work, don't overreact.”