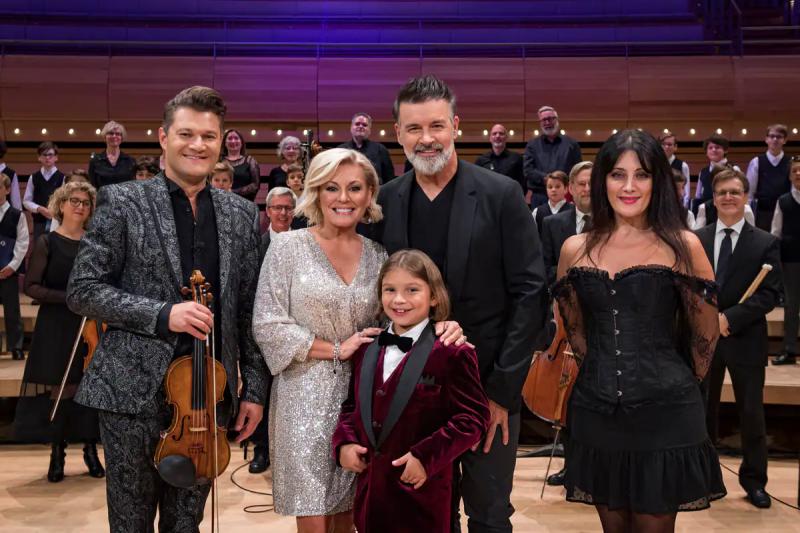 Guylaine Tanguay and Roch Voisine will perform with the Orchester symphonique de Longueuil, under the direction of conductor Alexandre Da Costa, for a very special series of concerts for the holiday season.

Tuesday afternoon at the Maison symphonique de Montréal, where poinsettias would decorate the front of the stage, the QMI Agency was treated to a brief preview of this upcoming Christmas show magical.

In the company of a few musicians and the Petits Chanteurs du Mont-Royal, Guylaine Tanguay and Roch Voisine offered four songs to journalists, including Happy Xmas (War Is Over) duet, Silent Night and L'enfant au tambour, which the singer shared with Mattenzo Da Costa, the little one of the conductor who led his ensemble near him.

< p>The official practices should begin in the next few days, but already the feverishness and the complicity of the team seemed great and festive.

Great admirer of the singer of Hélène since her very first appearances on the show Top Jeunesseat the turn of the 1990s, Guylaine Tanguay admitted to feeling privileged to share the stage with him for the first time. “Today at 50 to find myself next to Roch Voisine is really a privilege, because his career is really full and is far from over,” she said.

While the two soloists evolve with similar musical styles in their respective careers, Roch Voisine told Agence QMI that he had not chosen “too country” material for this show which will combine pop with classic “what that the Eagles song Please Come Home for Christmas that I released last year, we will do it with the Orchestra, but the country touch; we'll save that for after Christmas,” he said, laughing.

The singer, however, has not closed the door on possible variants for other holiday classics, although it is still a little too early for him to comment on this subject. The singer was already studying the possibilities of setting up a Christmas concert on his side before returning to Europe, when he received the call from the producers of “Parapapam”. Loving to collaborate with orchestras, his response was immediate.

Same story for the singer from Lac-Saint-Jean, for whom this show will have something pure. “It’s like the purity of music all that. We are in a place that is pure, that is true. The music behind us is the same thing, the children singing; that too is purity, that is the truth. In December we are going to recreate a little what is happening at home, we are going to surround ourselves with good people, nice people, and music, “said Guylaine Tanguay, adding that the only thing missing would be the Tourtière du Lac on stage. .

What his colleague Roch Voisine retorted tit for tat while laughing; “we have a long arm. I don't know if we can include that in the staging, but there's sure to be some behind it.”

The soprano Giorgia Fumanti and the baritone Vladimir Korneev that we will be able to hear on the Ave ​​Maria and Minuit Chrétien will also be performing.

In all, nearly fifty musicians from the Orchester Longueuil Symphony and 125 choristers, including Petits Chanteurs du Mont-Royal, will take to the stage at the Maison symphonique as part of the “Parapapam” show, presented from December 26 to 31.