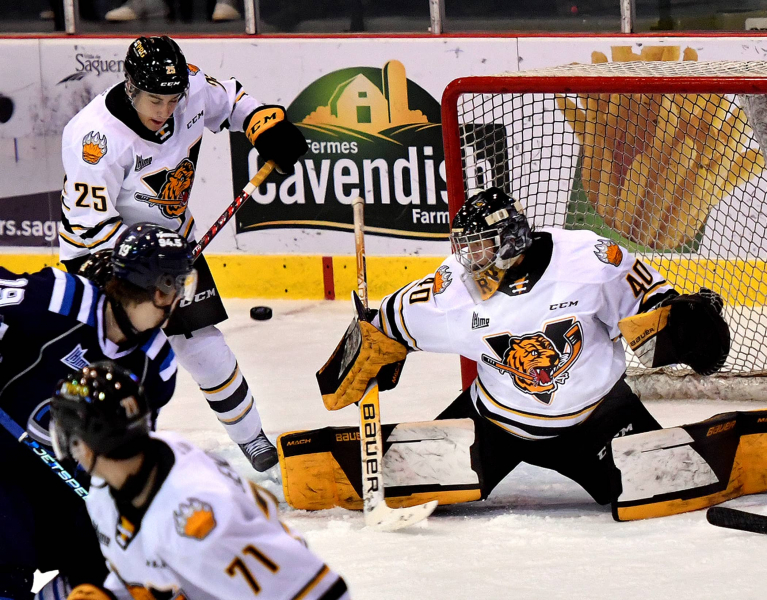 In the middle of the Halloween weekend, the Chicoutimi Saguenéens spooked the Victoriaville Tigres with a 4-2 win on Saturday night at the Center Georges-Vézina.< /p>

“Everyone pushed in the same direction. I think most players have brought their best game this season. With the rest, I liked the way we behaved, ”said Chicoutimi head coach Yanick Jean.

Deprived of several important elements, such as Maxim Massé, Zachary Roy and Emmanuel Vermette, the Blues were counting on a restricted formation. Fabrice Fortin took care of producing offensively with a harvest of three points.

The Tigers quickly stormed the net of Charles-Antoine Lavallée. Following a penalty from Matteo Mann, Maxime Pellerin increased his tally of goals scored to 10 with a crisp and precise shot.

It seemed to whip the hosts, who started leading more than throws on Nathan Darveau.

Towards the end of the first period, Fabrice Fortin carried the puck from one end of the ice to the other before handing the puck to Vincent Fredette. The latter was quick to shoot to score his first goal of the campaign.

The Sags maintained the same intensity in the second period. Halfway through it, Darveau made a blunder that allowed the crowd favorites to tie the score. Fabrice Fortin recovered the puck before sending it to Andrei Loshko.

A little later, Mathieu St-Onge's first goal in the QMJHL brought the two teams back to square one. The young man from Quebec beat Lavallée with another shot without warning.

Before returning to the locker room for the second intermission, Yanick Jean's troupe made sure to take the lead. Marek Beaudoin moved the ropes after seeing the black object slip between several players.

Fabrice Fortin earned his third point of the day by scoring with a dry shot into the top corner at the start of the last twenty.

“It always feels good this kind of game. We were motivated and ready. We knew we were going to do everything to play the right way and win,” said the native of Saint-Félicien.

With a two-goal lead, the Saguenay representatives kept control of the game by closing the door to all opposing threats.

The Saguenéens will now visit the Remparts this Thursday at 7 p.m., at the Videotron Center.