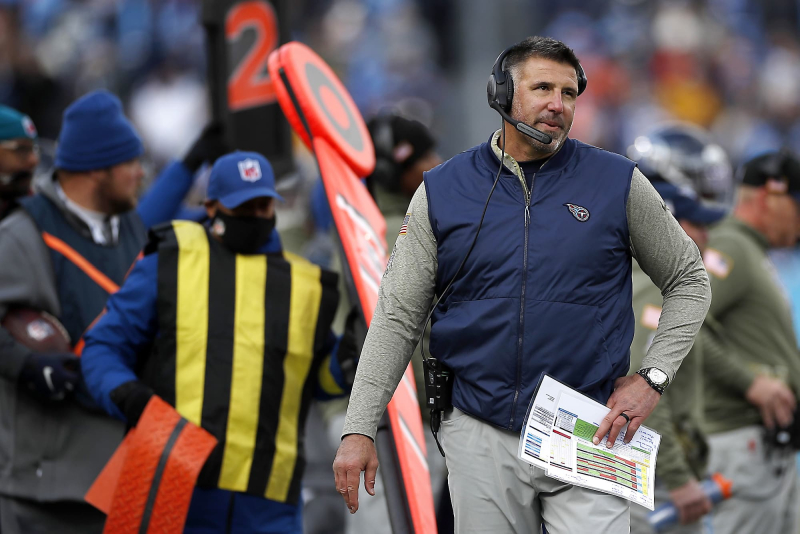 Nashville may be America's music capital and a whole party town, but the Tennessee Titans quietly represent this unique market by remaining among the top teams in the NFL.

The Titans, in action against the Packers tomorrow night, have been in the playoffs for the past three seasons and have been the No. 1 finishers in the American Conference South Division in 2020 and 2021.

This season, they continue their momentum with a 6-3 record that still earns them first place in the South. Oval fans are well aware of their solid performances over the past few years, but ask the casual fan to name five players from this team and it's likely to be mission impossible!

This observation is not intended to be a way of denigrating the Titans, on the contrary. Some would say this team lives and dies with King Derrick Henry, running back extraordinaire. strongest of the race when an overflowing infirmary should dictate otherwise.

Several teams have to deal with injuries, but for the Titans, it's a disaster. Already 68 players have been enrolled in the regular roster, only nine less than during the whole of last season. No less than 18 players are currently on the long-term injured list.

So that's kind of the recipe for the Titans. Aside from Henry, this team isn't full of star players, but they're constantly finding ways to set themselves apart.

For electric and spectacular football, you might as well look elsewhere. The Titans have won three of their last four games without scoring more than 19 points.

With a head coach like Mike Vrabel, style matters a lot less than execution. Finesse pays less than roughness. Without daring the comparison with the beginnings of the Patriots dynasty of the 2000s, there is a bit of Belichick in the style of Vrabel.

Under his guidance, the Titans may never be the best < em>showin town, but they'll still be well directed and they won't be the type to shoot each other in the foot. And that, for Nashville, is already music.

The Titans caused quite a stir in the draft when they traded receiver AJ Brown to the Eagles for their first-round pick. With that pick, they settled on Treylon Burks, another big-format receiver. His impact has been modest so far, with 13 receptions in five games, having just returned from a toe injury. The Titans' aerial game is in trouble and Burks has the potential to be a game-changer.

The State of Forces in the NFL

For the 16th time in 72 regular season starts, Patrick Mahomes threw at least four hit. When you stop there, it's ridiculously striking to see that in 22% of his games, the counter shows four or more touchdown passes. This is humanly absurd!

The Eagles blundered on Monday against the Commanders, in a game that looked from start to finish like it just wasn't their night. No need to punish them too harshly in the standings. Everyone has a bad day at the office.

It will be interesting to see how the Vikings react after their highly emotional victory, with a tough duel ahead against the Cowboys. Especially since they ended the duel against the Bills without their excellent blocker Christian Darrisaw and without several cornerbacks.

The Bills are not in freefall as some seem to imagine. One element to remember and correct as soon as possible, however: the offense has not scored a touchdown in the second half since week 6 against the Chiefs. If there is one aspect of concern, this is it.

Dolphins show 7 record -3 for the first time since 2001. The air offense had another strong game, but more encouragingly, the ground game produced a season-high 195 yards. No one wants to face this attack right now.

Are the Ravens on their way to glory? After their leave, they are involved in seven games in a row against teams that are currently showing a losing record. The Panthers, Jaguars, Broncos, Steelers (twice), Browns and Falcons are on the program.

For the first time in club history, the Cowboys spurned a 14-point lead after three quarters. Their record was 180-0 before the rout against the Packers in this context. Dak Prescott completed just 4 of 12 passes on third and fourth downs on Sunday.

The Jets will not have a gift in the coming weeks, returning from leave. An important division duel against the Patriots, then the Bears who seem to be forging their identity, followed by the Vikings who no longer lose and the Bills for a second time.

Not every win has always need to be nice and clean. The Giants had to give the ball 35 times to Saquon Barkley, who continues his dream season, in order to overcome the Texans. It was Barkley's fourth game of 100 or more yards.

The 49ers took advantage of the return of eight injured players to narrowly beat the Chargers. We will have to find a way to put more points on the board with such an offensive alignment. Nick Bosa was beastly hitting the quarterback four times (including a sack), in addition to three tackles for a loss. What a player!

Finally, a Titans receiver stood up! After weeks of starvation, it was Nick Westbrook-Ikhine who responded with five receptions for 119 yards and two touchdowns. Before that effort, the Titans wide ends had just one touchdown in eight games.

Two wins in a row for the Bucs and now they have rediscovered their ground game. The 44 carries against the Seahawks was the highest total of the Brady era. Rachaad White, a rookie carrier, could be a hidden card in the second half of the season.

Until midway through the fourth quarter against the Buccaneers, the Seahawks offense was held in check. Carrier Kenneth Walker III was limited to 1.7 yards per carry. The 49ers win makes the Seahawks' margin of error slimmer at the top of the division.

Coming back from the break, the Steelers are never a convenient opponent. And what a difficult end to the season afterwards with the Titans, Chiefs, Browns (with Deshaun Watson), Buccaneers, Patriots, Bills and Ravens! It will be a constant fight for a place in the playoffs.

The Commanders executed the perfect recipe to counter the Eagles' explosive attack by leaving it on the bench. They had possession of the ball for no less than 40 min 24 s. The Quebecer Benjamin St-Juste was talked about again by causing a fumble.

The Patriots return from their bye week encouraged by their positive record. If they want to make their way into the playoffs, however, the offense will need to show more consistency. Despite their two recent victories, they have recorded no less than 24 negative plays in these encounters.

Poor Chargers… Looks like we're pulling out the same old worn disc, but after all, their injury history is an old worn disc. Without its two blockers and its best receivers, the offense cannot work miracles. The defensive line is also decimated.

Christian Watson did- he saved the Packers' season, at least temporarily? The rookie became the Packers' leading receiver this fall with more than one touchdown in a game. Safety Rudy Ford, who had played just 20 games in five weeks, had two interceptions.

No, Colt McCoy n He doesn't have an ounce of Kyler Murray's talent at quarterback, but the Cardinals are now 3-1 when he's the starter and he's completed 74% of his passes in his four starts. This is exactly what is expected of a quality reservist.

The Rams have lost their last three games and five of their last six. Result: they suddenly crumble to the bottom of their division, a scenario unimaginable a few weeks ago. And now Cooper Kupp will have to go away for a few weeks. The house catches fire.

After all this noise, Jeff Saturday won against all odds his first game as head coach in the NFL. Six of the seven most recent Colts coaches had lost in their debuts. Jim Caldwell, in 2009, had been the only one of the lot to start with a victory.

Who is the NFL rushing leader in the past five weeks? Bears quarterback Justin Fields, with 555 yards! It's not the ideal long-term scenario, but you have to admire the prowess of the second-year pivot. Defense spoils everything, however.

Was the game at Steelers floor has finally seen the light? Against the Saints, rushing for 217 yards propelled the team to a rare victory. Head Coach Mike Tomlin has now defeated all 31 non-Steelers teams in his career.

Soon if the Falcons continue to fall, they will have to give rookie quarterback Desmond Ridder an opportunity. It's important to see if the third-round pick can do the job. It's not like Marcus Mariota justifies his role as a starter lately.

The Lions scored their first road victory in the Dan Campbell era, in their 13th game on enemy soil. They had to close a 14-point deficit thanks to the first touchdown on an interception return in 60 games for the team, courtesy of Jeff Okudah.

Deshaun Watson can return to training with his teammates, but even his return in December can hardly save the team. Especially since the Browns face the Bills and the Buccaneers in the next two weeks. The margin of error is minimal.

The Panthers' commitment to the ground game continued against the Falcons with 47 carries for 232 yards. D'Onta Foreman, who already looked good for the Titans last year, is establishing himself as a good running back. Baker Mayfield resumes his position as starting quarterback.

Saints can still tell themselves that their season is not lost because the South division is weak, but we have to face the facts. The injuries are piling up, the defense is disappointing, the ground game isn't consistent and they still don't have a quarterback who commands respect.

The Broncos have just 12 touchdowns in nine games this season. Sunday, Russell Wilson was the victim of six quarterback sacks behind an offensive line that lost two starters. Receiver Jerry Jeudy was also injured. It's been a disastrous first half of the season.

The Jaguars showed a +3 differential in turnovers against the Chiefs, but still lost. According to NFL Research, teams with such a differential were 22-0 before this loss. Why are only the Jags to support such statistics?

The Raiders present a record of 0-6 this season in games decided by one possession. It's incomprehensible that this roster, which was from the last series, fell so low despite additions like Davante Adams and Chandler Jones, who is invisible.

Tone is rising in Houston for quarterback Davis Mills to be dislodged. Even if he is not the solution for the future of the Texans, what is the point of replacing him with Kyle Allen or Jeff Driskel, who are neither the future, nor the present, nor the past?