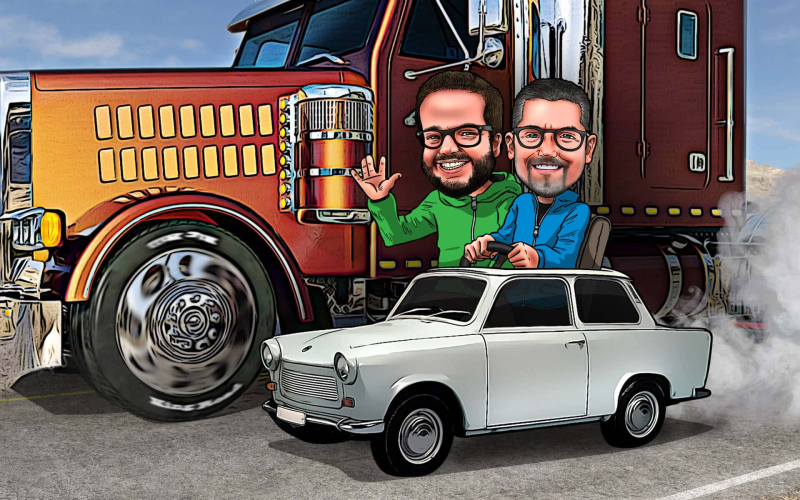 History buff and car enthusiast, Jean-François Bourque is one of the very few owners of a Trabant car in America du Nord.

On the program of the Guide de l'auto on QUB Radio, Antoine Joubert and Germain invited this irreducible Trabant to learn about this little car. German.

A car made with the means at hand

Although German, the Trabant has nothing to do with Volkswagens or luxurious Mercedes-Benzes. Marketed in the early 1960s, this small two-door car with a unique look could not be more rudimentary.

“The body is made of Duroplast. It is shredded cotton fiber which gives a fiberglass feel. East Germany was very limited in its ability to exploit natural resources, such as steel. It's a shortage car! says Mr. Bourque.

Mechanically, the Trabant is hardly more sophisticated. “This is an old 500cc two-stroke, air-cooled DKW engine. It is very close to the mechanics of a snowmobile. Over time, the engine capacity increased to 600 cc with a power of 24 horsepower,” adds Mr. Bourque.

A crush on the streets of Berlin

It was during a trip to Germany that Jean-François Bourque fell in love with the Trabant. Interested in the history of the Cold War, he traveled to Berlin because of its great historical heritage. Knowing the Trabant only by name, he took advantage of this trip to familiarize himself with this car with its friendly face.

“For around 80 euros, I spent 1h30 driving a Trabant . I had the choice between 50 models on site to take a guided tour of the city,” he recalls. Accompanied by a dozen other tourists, he took a city tour at the wheel of this car from another era.

A model found in Texas

Following this trip, Jean-François Bourque realized the obvious: he had to find a Trabant.

“When the Berlin Wall came down, Trabants were practically worthless. Officials at a US museum bought two, but they never put the cars on display. In 2013, a Trabant collector in Texas bought one of the two and then resold it to me,” says Mr. Bourque. According to his testimony, there would be between six and seven Trabant cars in Quebec. One of the owners even pushes the exercise to drive his car all year round in Montreal!

A bit like the Volkswagen Beetle or the Citroën 2CV, the Trabant is one of these cars whose heritage goes beyond the automobile. It is no more and no less than a part of our history that is represented by this car from East Germany, at a time not so long ago when the world was downright divided in two.

During this issue of the Car Guide, the unveiling of the 2023 Honda Accord and 2023 Pilot was also discussed.

Antoine Joubert and Germain Goyer give their impressions of the recently tested 2023 Jaguar F-Type and Toyota Mirai.