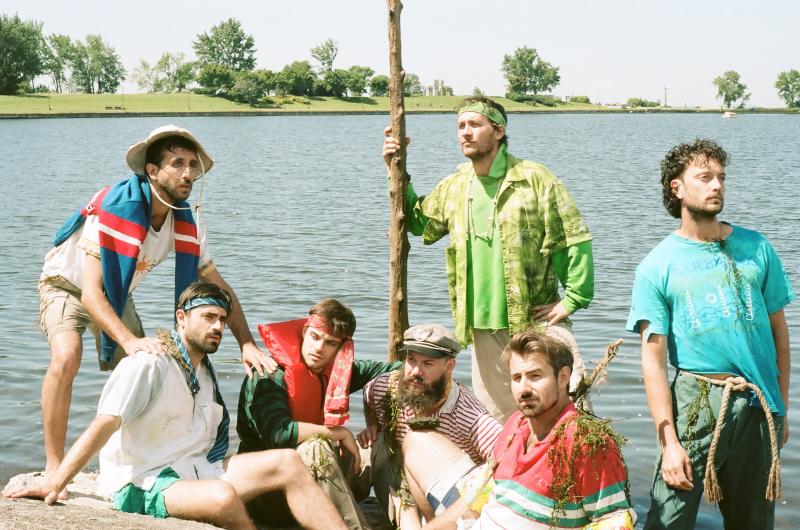 For a third year, Qualité Motel returns to the river with its eco-responsible mini-tour La Virée du Saint-Laurent. This time, the musicians, who are also part of the Valaire group, have decided to invite other artists with them for their ten-day journey that will take them from Rimouski to Gaspé. The Journal spoke with one of the band members, Luis Clavis.

What do you have planned for this third edition of La Virée du Saint-Laurent ?

“Last year, we spent more than three weeks on both shores. This year, as everything had started again with the shows, we had other commitments with Qualité Motel. But we managed to block ten days to go on the river. We will have five shows and five shoreline cleanups. After Rimouski (yesterday), we will go to the Sea Shack (Sainte-Anne-des-Monts, Monday), Mont-Louis (Wednesday), Petite-Vallée (August 12) and Gaspé (August 15). »

“What is different this year is that we wanted to invite other artists. We have Les Louanges, FunkyFalz, L'Isle and LaF who will come to open for or […] on our show. Even if we lacked time this year, we wanted to take the project further by inviting people to see if it could apply to other bands, this project. To see if there is a certain sustainability to the project, if it can be done without Qualité Motel. »

How did your second edition go last year?

“We released a web series of three 20-minute episodes that talk about it. There is an episode dedicated to Gaspésie, another to Bas-Saint-Laurent and one to Côte-Nord. It was great. We were still quite lucky with the weather. We depend a lot on that. You still have to go to each show by sailboat. Only at the end of La Virée, on the North Shore, where we caught the tail end of Hurricane Ida. It brought us big waves in the face. The majority of the crew was sick! But that's part of the adversity, on a tour like this. Regarding the cleanup of the banks, we collected more than a ton of waste. La virée is a project that is based above all on conversation and encounters.  »

Do you feel that you are making a difference, on your scale, in these places during your visit?

“The cleaning of banks, of course, does not harm not. Afterwards, do we make a difference in relation to the state of the river? I do not know. But the awareness, the reflections and the conversations that it generates, for us, that's really the essence of the project. In our opinion, it makes a difference.

“Our meetings with the people on site are going extremely well. The concerts we do are free and everyone is grateful for that. We do shows, most of the time, in places where there are usually none. Also, we try to mobilize people who live in those places. We have been living in Montreal for 15 years. We don't want to be the Montrealers who arrive in the region by showing how it's done there. »

Did you learn about navigation with this Fire ?

“Last year and this year, we are with La Belle Vie Sailing, which is a couple who live on their boat. They welcome Quebecers in the south throughout the winter. They are excellent teachers. It allows us to navigate. It helps everyone. Because after that, when we sail at night, we go around, it's each his turn for a little two hours. »

Have you thought of going on a winter?

“We had a project with the ski mountains of Quebec last year. Eventually, COVID hit us in the face when we were planning on doing it. We hope to be able to recover this year. »

And for the other projects, what is happening with Qualité Motel and Valaire?

« It's stirring. Motel quality, we always have shows. For Valaire, we did a shoot photo a few days ago, because the album is ready. He was sent so that we have vinyls in time. From the return of the Virée, we will start releasing singles. And this winter, in February, we will release the entire album. For my part, I will release a small EP in November, volume 2 of Echoes of a distant life. »

The third edition of La Virée du Saint-Laurent will take place until August 15th. For all the details: lavireedusaintlaurent.com.