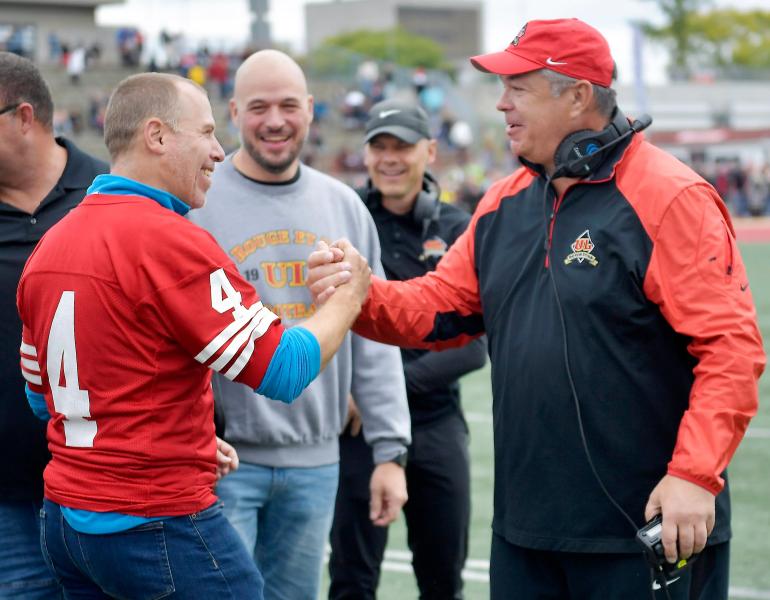 Not all players can boast of being part of a dynasty. Even less to be the instigators. Nearly 23 years after the Rouge et Or's first triumph at the Vanier Cup, the victory of the “no-names” of Laval University remains “etched in the memory”.

The November 27, 1999, the young program of the Rouge et Or defied all predictions and was crowned at the SkyDome in Toronto. That 14-10 win over the mighty Saint Mary's University Huskies set the stage for a dynasty that would dominate Canadian college football for years to come.

The alumni took a group photo .

Since that time, nine other Vanier Cups have taken the path of Laval University's PEPS.

“We feel old. You feel very old,” Francesco Pepe Esposito first laughed when asked to step back in time.

The former defensive end and 25 of his former teammates were introduced to the crowd ahead of the game in a retro 90s themed match.

Neither Pepe nor his teammates suspected the impact this championship would have on an entire football program.

“We didn’t even think about it. At the time, we were, I apologize for the term, no-names”, he says humbly.

These remarks were also echoed by the former pass receiver Sébastien Robillard.

« The extent that it could have had… The Nordiques were gone, the people of Quebec took over the football club. First French-speaking team also which was in the circuit. There was an enthusiasm that was beyond what we could have hoped for,” he recalls.

“A kind of lightness”

< p>Francesco Pepe Esposito does not hesitate for a moment when asked if the memories of this Vanier Cup are still fresh in memory.

“I remember everything. Match preparation, coaches, practices the week before. To embark on this gamethere without really being aware of what we were going to accomplish. We were, yes, nervous, but I think that our lack of distance from the situation gave us a kind of lightness, ”says the one who had won the title of defensive player par excellence that day.

Since then, the underrated young team has become an example to follow across Canada. While the crowd of more than 13,000 spectators cheered these favourites, Stéphane Robillard noted the progress made.

“To see the program today, everything that has been done, it's extraordinary”, s he exclaims.

Mathieu Bertrand, special teams coordinator and center-backs coach, also had a lot of fun reconnecting with his ex-teammates.

“I think it's fantastic. These are the guys who started the program and believed in it from the start. The fact of bringing them back and that they can see how it is done now, I find that extraordinary.

“It's friends you win championships with and there's no one who can take that away from you.” These are memories that will remain etched in our minds forever. »