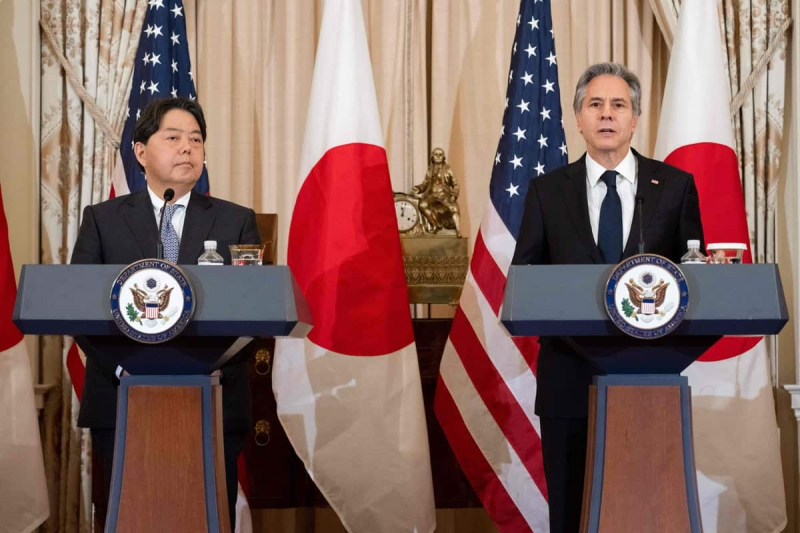 The United States and Japan on Wednesday flaunted their “strategic alignment” on defense that extends into space, amid growing concerns over China and the United States. tensions around Taiwan and North Korea.

“We agree that China poses the most important strategic challenge” to the two countries, said the head of the American diplomacy, Antony Blinken, at the end of a meeting in Washington with his Japanese counterpart Yoshimasa Hayashi, as well as the US and Japanese defense chiefs.

Speaking at a joint press conference, Mr. Blinken assured that the United States “warmly welcomes” the new posture of Japanese defense and clarified that the security and defense agreement between the two countries also applies to space.

Any incident in space could activate Article 5 of the defense treaty between the two countries which states that an attack on one is an attack on the other, he said.

< p>For his part, the United States Minister of Defense, Lloyd Austin, announced the deployment by 2025 of a rapid reaction force of Marines in the Japanese island of Okinawa to strengthen the defense of Japan which is increasingly concerned about China's activities in the region.

“We are going to replace an artillery regiment with this force which will be more lethal and more mobile,” Austin said during of this press conference.

He believed that this force “will make a major contribution to improving Japan's defense and promoting a free and open Indo-Pacific region”, the expression commonly used in the United States to refer to the Asia-Pacific.< /p>

More than half of the approximately 50,000 American soldiers present in the archipelago are stationed on the island of Okinawa.

Mr. Kishida, whose country holds the presidency of the G7 in 2023, visited France and Italy, and was in Britain on Wednesday where he signed a “reciprocal access agreement” bringing their armed forces closer together. He is also due to go to Canada on Thursday.

In Washington, ministers welcomed this “modernized alliance” in the face of a new era “of strategic competition with China”, according to the head of Japanese diplomacy .

In December, Japan approved a major revision of its defense doctrine, which notably provides for a colossal increase in its military expenditure over five years.

This is a crucial turning point for the country, whose the pacifist constitution, adopted the day after its defeat at the end of the Second World War, forbids it in principle to equip itself with a real army.

The question of Taiwan and the denuclearization of South Korea North were also a focus of talks, officials said.

North Korea's missiles and China's “increasing belligerent behavior” require “showing that you have the wherewithal to deter any potential adversary.” “, had assured before the meeting a senior American diplomat on condition of anonymity.

“The Japanese do not want to embark on the path of nuclear armament and it is not something that we would support either, but having the ability to retaliate is deterrence he said.