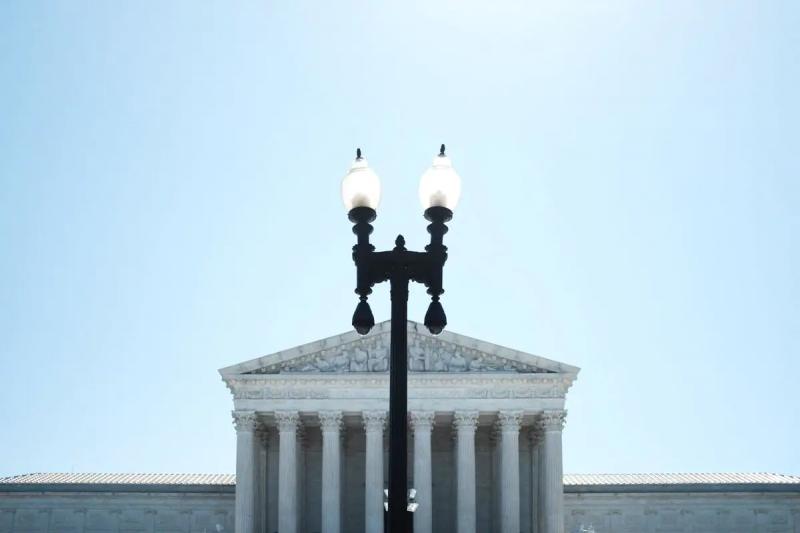 WASHINGTON | The very conservative United States Supreme Court on Thursday limited federal means to fight global warming in a ruling that could more broadly complicate all regulatory efforts by the American state.

The high court found that the Environmental Protection Agency (EPA) could not enact general rules to regulate emissions from coal-fired power plants, which produce nearly 20% of electricity in the United States.

The White House immediately denounced a “devastating” decision and called on Congress to “put America on the path to a cleaner, more secure energy future.”

< p>The judgment was adopted by the six conservative judges of the Court, on the last day of a historic session, marked by the end of the right to abortion and the sanctuarization of those who bear arms.

“Putting a cap on carbon dioxide emissions at a level that would force a nationwide switch from coal to power generation could be a relevant solution to today's crisis,” Judge John Roberts wrote in their name. “But it is not credible that Congress gave the EPA the authority to pass such a measure.”

Their three progressive colleagues dissociated themselves from a decision deemed “frightening”. “The Court stripped the EPA of the power Congress gave it to address 'the most pressing problem of our time,'” wrote Judge Elena Kagan, recalling that the six hottest years have been recorded in the United States. decade.

Reflecting the divisions in American society on environmental issues, the decision was immediately hailed by the Republican Party, hostile to any federal regulation and defender of fossil fuels.

“Today, the Supreme Court is giving power back to the people,” said its Senate leader, Mitch McConnell, criticizing Democratic President Joe Biden “for waging a war on affordable energy” despite an inflation rate. record.

The Democrats, like the young elected Alexandria Ocasio-Cortez, on the contrary considered the decision “catastrophic”. “Our planet is on fire and this extremist Supreme Court is destroying the ability of the federal power to fight back,” added Senator Elizabeth Warren.

Appalled, environmental organizations have highlighted the gap with the rest of the world. “The decision threatens the United States with being relegated far behind our international partners who are accelerating efforts to meet their climate commitments,” said Nathaniel Keohane, president of the Center for Climate and Energy Solutions.

In 2007, the Supreme Court had nevertheless decided by a narrow majority that the EPA was competent to regulate the emissions of gases responsible for global warming, in the same way that it is charged by a law of the 1960s with limiting the pollution of the 'air.

But since then, former Republican President Donald Trump, a climatosceptic hostile to any restrictive measure for the industry, has brought three magistrates into the temple of American law.

Beyond the EPA, their decision could limit the efforts of all federal regulatory agencies, including Occupational Health and Safety (OSHA).

“The majority said agencies cannot take meaningful action to meet their goals, no matter how high the stakes,” environmental law professor Robert Percival of the University of Maryland told AFP. .

She “insists that these agencies get clear ‘congressional authorization’, but she knows Congress is extremely dysfunctional,” adds Harvard professor Richard Lazarus.

Given the fractures between elected officials, hoping for the adoption of a climate law does indeed seem like wishful thinking.

In concrete terms, the issue at the heart of the decision finds its source in an ambitious plan adopted in 2015 by Barack Obama to reduce CO2 emissions. This “Clean Power Plan”, whose implementation fell to the EPA, had been blocked before coming into force.

In 2019, Donald Trump published his own “rule for clean energy affordable,” limiting EPA’s scope of action within each power generation site, without allowing it to remodel the entire grid.

A federal court having invalidated this version, several Conservative states and the coal industry have asked the Supreme Court to step in and clarify the powers of the EPA. Barack Obama's plan and had asked the High Court to declare the case lapsed to avoid a decision with harmful consequences. His bet failed.