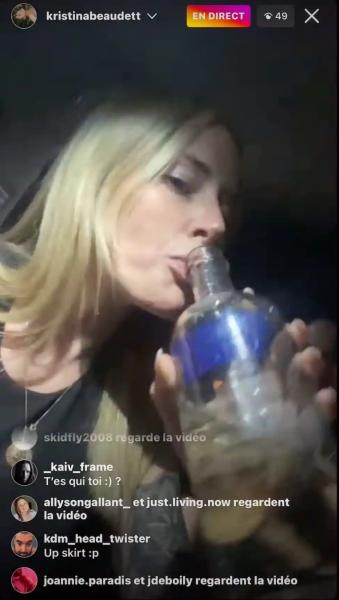 An influencer, who rose to fame for being on the Sunwing flight to Tulum last winter, filmed herself live on Instagram late last night, drinking from a bottle of alcohol while she was at the wheel.

-Listen to Anaïs Guertin-Lacroix at the microphone of Alexandre Dubé on QUB radio:

“Chug! Chug! Chug!” shouts a passenger from the car driven by Vanessa Sicotte.

In an Instagram live video posted overnight from Tuesday to Wednesday, Sicotte is seen drinking what appears to be alcohol from a bottle Absolut Vodka while driving a vehicle.

Several short-lived posts had been posted on his Instagram account earlier in the evening, showing many empty shooters on the table of a Laval bar.

Followed by 27,000 subscribers on Instagram, the young woman, nicknamed the “vaper of the flight from Sunwing,” is known for her social media antics.

She made international headlines with a photo of herself illegally smoking an e-cigarette on a private Sunwing flight to Tulum last January.

As a student to become an airplane pilot, she had her license suspended for 21 days in the wake of the controversy and she had fined $1,750 for not wearing a mask.