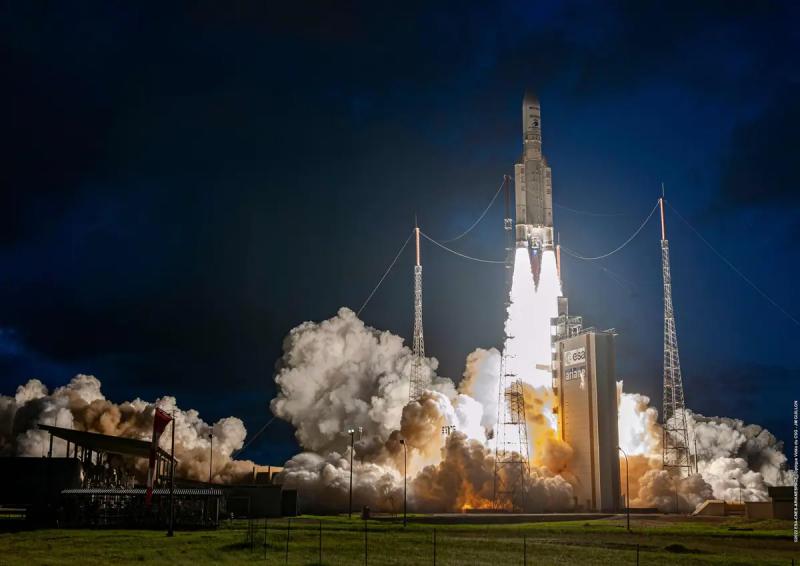 Vega-C, the muscular evolution of the Italian Vega rocket, is due to make its maiden launch from Kourou on Wednesday, using common elements with its big sister Ariane 6 to allow Europe to be more competitive in a booming satellite market.

The so-called qualification shot is scheduled for 11:13 GMT from the space base in French Guiana under the aegis of the European Space Agency (ESA). It should allow two hours later to put several scientific payloads into orbit at an altitude of 6,000 kilometers, including LARES-2, a sphere used to study the effect of gravity in orbit.

This photograph taken on 21 June 2022 shows the interior instrumentation of Vega-C before integration into the launcher to study gravitational waves.

Vega-C, for “Consolidation” according to its industrial prime contractor, the Italian Avio, is an improved version of the light launcher Vega, fired 20 times (with two failures) since 2012.

“C It is also a step for Ariane 6: the booster is a key element of A6 and it will fly”, adds Stéphane Israël, president of Arianespace, the company responsible for the commercial exploitation of Vega and Ariane.

< p>The P120C is in fact used both as the main stage for Vega-C and as a booster for Ariane 6. Europe thus has common modules for its future light (Vega-C), medium ( Ariane 6 equipped with two boosters) and heavy (Ariane 6 version four boosters).

All these programs were launched at the same time in 2014. The first flight of Ariane 6 has been postponed to 2023.

With its increased performance, Vega-C can address 90% of the market for satellites in low orbit at a few hundred kilometers altitude, compared to half for Vega, according to Avio.

Faced with a Fierce competition, notably from the American SpaceX, the new launchers come at the right time: more than 17,000 satellites must be launched by 2031, i.e. 4.5 times more than during the past decade, according to the firm specialist Euroconsult. Among them, a large majority of small satellites (less than 600 kg) sent to low orbit.

At 35 meters in height, Vega-C is a little taller and wider than Vega, and will be able to put satellites weighing a total of 2.2 tonnes into a reference polar orbit at an altitude of 700 kilometers, compared to 1 .5 tons for Vega.

For this, most of the stages of the rocket were doped. The first stage – or main stage – the P120C, is a thruster filled with 144 tons of solid propellant, against 88 for that of Vega. The second stage, the Zephiro 40, is also new and more powerful, while the third stage, the Zephiro 9, remains the same.

As for the fourth stage — or upper stage —, the Avum+ module, “it has been equipped with new functions to increase the duration of the mission”, explained Alessandro Tamburini, Avio manager during a recent visit to Kourou.

Re-ignitable, it allows satellites to be positioned on different orbits before de-orbiting itself so as not to leave debris in space.

The war in Ukraine has raised fears of a break in the supply chain: the motors for Avum modules are manufactured in Dnipro, south-east of kyiv, by the Yuzhnoye Design Bureau.

“There there is no concern for the continuity of flights. Avio has built up strategic stocks and is thinking about alternatives”, according to Stéphane Israël.

Operation is “assured in the medium term”, also reassures Daniel Neuenschwander. If the situation were to last, ESA plans to adapt already existing engines for Avum+.

“And we are working on the new M10 engine for Vega-E, we are looking at the anticipation of the Vega- E,” currently scheduled for 2026, he said.

After that maiden launch, the Italian rocket’s manifesto includes nine launches (seven for Vega-C and two for Vega), according to Arianespace. ESA expects four to six launches per year.

Twelve countries contribute to the Vega program, led by Italy, which provides 52% of the financial contributions.