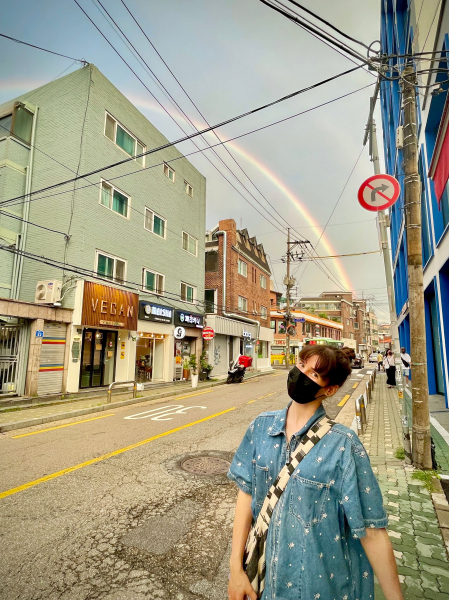 Quebecers who have been living in Seoul for years continue to lead their lives serenely despite the new threats made by Pyongyang against South Korea.

“Honestly, it is business as usualnobody talks about that here, explains Simon Bureau, a native of Sherbrooke who has lived in South Korea for 22 years. It makes the headlines of course, but on a daily basis, people live normally. I often go out to restaurants or bars, and I don't see any particular protocol in place on the streets.

A native of Sherbrooke, Simon Bureau moved to Seoul 22 years ago.

Same story with Ariane Desgagnés-Leclerc, who has lived in Seoul for 10 years.

Ariane Desgagnés-Leclerc loves her daily life in South Korea, where she has lived for ten years.

“In recent days, there has been a lot more talk about the deadly stampede that occurred on Halloween than about North Korean provocations, says the young woman from Rouyn-Noranda. The subject never comes up in the debates. »

Diplomatic tensions have however sharply accelerated in recent weeks between the two Koreas, after a record series of 23 missiles fired by the Kim Jong-un regime, one of them landing in South Korean territorial waters. Seoul then immediately responded by sending three surface-to-air missiles near the inter-Korean maritime border.

On Monday, Pyongyang issued new threats against its southern neighbor, promising a “sustained, firm and overwhelming military response to the military exercises conducted jointly by the United States and South Korea a few days earlier.

“Pyongyang systematically makes a show of force after the maneuvers between Washington and Seoul, this is nothing new,” says Simon Bureau. When you are away from Korea, you have the impression that war is imminent, but there, no one fears a military escalation or a nuclear attack. »

Ariane Desgagnés-Leclerc admits that she may have felt worried when she arrived in Seoul 10 years ago, when tensions between the two countries were rising a notch.

“I had just arrived and North Korea had launched a missile on a South Korean desert island, I could feel apprehensive at that time, says the 34-year-old Quebecer. But since then, the provocations have become almost routine. We know that these are only words, therefore the danger seems much less credible. »

Valérie Piche, who has been living here for seven years, seems less optimistic.

“The current South Korean president, unlike the old one, has a very negative attitude towards the North,” explains the young woman from Candiac. It's a shame, because a lot of progress had been made in recent years to calm relations between the two countries. All we hope is that the situation does not degenerate further, and unfortunately, the population has no control over the situation. »

Seduced by the dynamism of the country

Officially at war, South Korea remains hectic for many Quebec expatriates who would not leave for anything in the world this country they adore for its dynamism.

Paul-Alexandre Fournier, also known as “Paulseoul”, has become a famous youtuber in South Korea. In the photo, he wears a royal costume in a traditional café

“When I arrived here six years ago, I partied a lot, because it's 24/24”, jokes Paul Alexandre Fournier , Montrealer turned YouTuber in Korea.

“Seoul never sleeps, confirms Ariane Desgagnés-Leclerc, who has been living in the capital for ten years. No matter the time, there is always something to do. »

“Koreans are impatient by nature, so everything is very fast,” she continues. Everything works great, transportation is super efficient. It's a lifestyle that suits me well. »

The quality of services is also praised by expatriates. “What strikes me is the efficiency of hospital care,” says Mr. Fournier. Here, in one day, you can be operated on! »

Once the language was learned, contact would be easy with the South Koreans, described as “curious and open” by expatriates.

“What I like the most is their generosity, believes Valérie Piche, originally from Candiac. People always seek to give a little something to those they appreciate, without expecting anything in return. »

Some cultural differences are however sometimes felt.

“Korean men have to do their military service, and since I didn't do the army, there is a gap there,” explains Mr. Fournier.

With nearly 27 million people in its urban area, Seoul is one of the most populated cities in the world.

“We are always surrounded by many people, it gives you the feeling of never really being in your own bubble,” says Ariane Desgagnés-Leclerc.

And even if there is a high concentration of population, South Korea remains a very safe country on a daily basis.

“Despite its status as a country at war and the tensions with the North, people feel safe here, analyzes Paul Alexandre Fournier. One can walk down the street without any fear.

Could the recent escalation of tension ultimately lead to war between the two Koreas? The experts are divided.

“Currently, South Korea is the most threatening, not the other way around,” says Joseph-H. Chung, Korean-Quebec professor in the Department of Economics at UQAM. North Korea is simply in a defensive posture. If Seoul continues to be so belligerent, it may escalate into all-out war.

The May election of Yoon Seok-youl as leader of South Korea was a game-changer, according to Chung.

“He is a conservative president and very hostile towards North Korea, explains the specialist. During his election campaign, he multiplied his provocations against Pyongyang, partly explaining the escalation of recent days. »

Vigilant Storm, the largest air operation ever conducted between the United States and South Korea, with 240 fighters sent over the Korean peninsula in late October, was seen as a “provocation” by the North Korean regime, which responded by firing 23 missiles.

“Washington and Seoul are used to doing combined air exercises, but this year they sent more planes than usual,” Chung said. For Pyongyang, it is perceived as a threat. »

Loïc Tassé, political scientist and specialist in Asia, judges for his part “highly improbable” a war between the two countries, believing that North Korea has “no rational reason” to attack the South head-on.

“There would be an immediate response from Washington and Seoul, and North Korea would be destroyed within minutes,” he said. Especially since China, an ally of Pyongyang, had hinted a few years ago that it would not support Kim Jong-un's regime if he attacked first. »

« The cards have been reshuffled since the conflict in Ukraine, judge Mr. Chung. North Korea has strengthened its ties with China and Russia since the start of the war. This should leave no one optimistic.