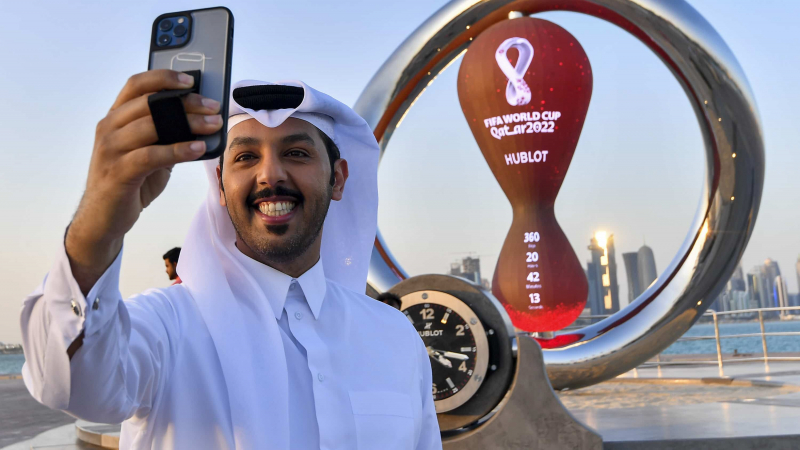 “Everyone is welcome in Qatar”: it is with these words that Nasser Al Khater, general manager of the 2022 Soccer World Cup in this country, wished to calm the controversy over the acceptance of people from the community LGBTQ+ who would like to come and support their team. In view of the situation there for the people of the country, it is quite the opposite.

In his attempt to appease one of the controversies among many others which surrounding the organization and holding of the Soccer World Cup in this country of the Arabian Peninsula, Mr. Al Khater was able to explain that “beyond public marks of affection, everyone is free to live their life”.

🗣 "Everybody is welcome here, and everyone will feel safe."

On the other hand, the English site inewstaught us otherwise. In fact, the LGBTQ+ community there is absolutely not free to live their lives and are even subject to state abuse that would amount to crimes in Canada.

The homosexuality is punishable under the Shariah sanctions in Qatar. With the Soccer World Cup fast approaching, the country is trying at all costs to hide this reality from the many visitors who will be present.

A tweet from a prominent Qatari journalist and columnist who works for Al Jazeera and has 57,000+ followers on a verified account.

“Everyone is welcome” at this #FIFAWorldCup, we were told… pic.twitter.com/ddWtq2haQa

Harassment, physical and sexual assault, rape, mutilation and kidnapping schemes through online dating apps… these are some examples of what a person from the Qatari LGBTQ+ community, or from a country which is not a great power, if it gets caught in Qatar.

The head of the investigation and many associations are also concerned about the possibility for visitors to the World Cup world to meet the same fate.

For Nasser Mohammed, the only Qatari LGBTQ+ personality who has come out and lives far from his country, in Los Angeles, these would not have nothing to worry about.

On the other hand, for Mr. Mohammed, although the partisans risk nothing, the citizens of the country caught in the act of having a homosexual relationship with one of these visitors could be inflicted with the various abuses listed above.

Using the comparison, the journalist responsible for the investigation, Patrick Strudwick, also takes as an example an advertisement featuring soccer legend David Beckham.

This ad features the former Real Madrid and Manchester United player aboard a boat sailing at high speed along the coast of Doha, the capital of Qatar. He explains that Qataris are proud of their culture and the fusion between tradition and modernity. It also touts the country as beautiful, magical and welcoming.

We want to express our gratitude to the inspirational locals, chefs and artists who accompanied David Beckham on his 48-hour stopover in Qatar – for sharing their memorable stories, experiences and journey about the country's culture & legacy. pic.twitter.com/Vs9Vgi8n9d

In opposition, the journalist reports that it is therefore quite the opposite for the various LGBTQ + sources on the spot which allowed him to carry out his investigation. It would even be dangerous to speak anonymously about one's sexual situation as a minority because of the omnipresence in all strata of society and in all communication channels of the Ministry of Preventive Security, an Orwellian type moral police omnipresent on Qatari territory.

Human rights activist Peter Tatchell was detained in Qatar after he staged what his foundation claims to be the first-ever public LGBT+ protest in any Gulf state just 26 days before the World Cup.

The Qatari embassy in London told Sky News that Mr Tatchell had not been arrested.

Despite these difficulties, Mr. Strudwick was able to collect several specific testimonies including a chilling one from a bisexual female person who explains that she was beaten several times until she lost consciousness until she signed a document where she swore that she abandoned all immoral practices. The report also reports the existence of multiple conversion camps for people from the LGBTQ+ community, something Qatar has so far denied.

The World Cup of Scandals< /p>

If this kind of practice is not unique to Qatar (Arab countries like Egypt also practice this kind of atrocities), it is part of the set of controversies with which the country has had to live since the attribution of the Soccer World Cup on December 2, 2010.

Suspicions of bought votes and bribes paid to members of the management committee of the International Soccer Federation (FIFA), foreign workers who died by the thousands in inhuman conditions on the construction sites of the stadiums of the tournament, etc., the organization of this edition suffers from numerous scandals which threaten to tarnish the reputation of the most followed competition in the world, the most practiced sport on the planet.

As for the controversies concerning the people of the LGBTQ+ community on the spot and who will be visitors to the tournament, they were also numerous. Recently, the UK Foreign Secretary urged sexually diverse people to self-control and “keep a low profile” during the competition.