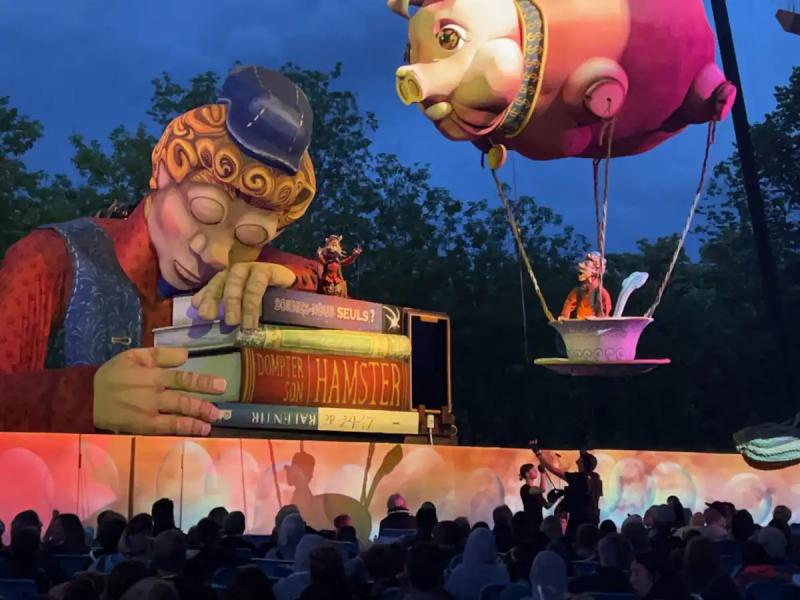 The new show “Victor and the gift of dreams” presented this summer at the Théâtre de la Dame de Cœur in Upton, in Montérégie, tells both a story that reaches adults and immerses children in a universe of dazzling dreams.

The show begins on the day of the 25th birthday of Victor, this ambitious man who has fallen asleep from having once again worked too much. As soon as the curtain rises, his gigantic puppet represents him on the outdoor stage sleeping on a pile of books given to him by his grandmother for his birthday. One of the books is called “Tame your hamster”.

This little rodent takes advantage of the main character’s sleep to take possession of his brain and hammer him with his thoughts. His goal: to convince Victor that by becoming the “God of finance” with thousands of employees under his command, he will know happiness thanks to his power and his wealth.

Luckily, Victor's grandmother, who has more than one magic trick up her sleeve, fiercely opposes the grip of the raccoon hamster. Instead, she encourages her grandson to enjoy life and open his heart to love.

Indeed, this fight between these two enemies takes place in a fantastic scenic atmosphere, with grandiose and surprising effects. Exploded characters, such as the luminous alien, the giant old slipper and the pig with funny replicas, come to life on stage. The public is even surprised to see plants growing from the floor of the hall, among the audience.

The story s inspired, in the background, by the famous book “Pensouillard le hamster” by Dr Serge Marquis. However, what gives so many colors to this large-scale spectacle is the absolutely “horrible” illustration of this rodent, which rolls relentlessly in people's heads.

The more the representation advances , the more the special effects gain in rhythm and intensity. You have to see the impressed eyes of the children admiring Victor, aboard his “snail 727”, to finally fly away above their heads. The careerist then meets a pretty tightrope walker, on a bicycle, who could change his destiny…

At nightfall, young and old find themselves immersed in the heart of Victor's dreams where laughter, the absurd and wonder come together. This large-scale production is the fruit of three years of creation which succeeds, once again, in renewing this magic.