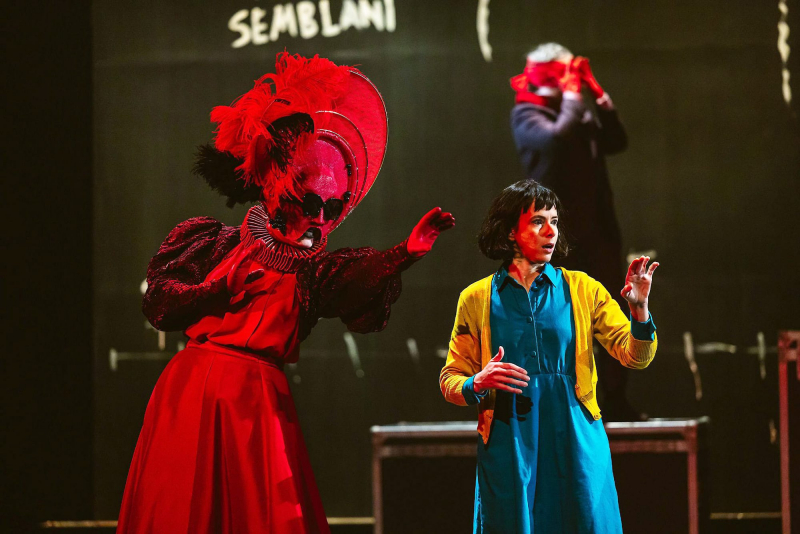 When landing for the first time on the boards of the Trident, it was obvious that the Théâtre Rude Ingénierie was to offer something unique. Faced with her rereading of the tales Alice in Wonderland and Through the Looking Glass, the viewer is confronted with an ingenious, crazy and unconventional production.

On display at the Trident until December 3, Alice! is an extraordinary proposal and in the image of the multidisciplinary company from Quebec.

The trio made up of Bruno Bouchard, Philippe Lessard Drolet and Patrick Robitaille, who sign the creation and the direction of this theatrical object, sticks, for the first time, to a text, to characters and to a well-established dramaturgy.

There are games, performers, live music and painting and the heterogeneous bric-a-brac of the Théâtre Rude Ingénierie.

To appreciate the 110  minutes of Alice!,you have to leave all logic behind. The meaning, in these two tales revisited by Emmanuelle Jimenez, is lost. A bit like Alice in the forest, after crossing the mirror. Searching for meaning, through dialogues filled with absurdity, turns out to be an impossible mission.

In search of a magnificent garden, Alice, played by Marianne Marceau, finds herself immersed in a quest where she meets strange characters and strange animals.

There is the white rabbit, the baby who transforms as a Pig, the Cheshire Cat, the Mad Hatter, the Living Card Game, Humpty Dumpty the Queen of Hearts and the Inverted World.

Alice!opens with an empty stage. There is an old mechanical piano on the left and all the bric-a-brac of the Théâtre Rude Ingénierie gathered on the right. The different scenes are built before our eyes.

One of the strengths of this proposal is to succeed in plunging the viewer into a state of incomprehension similar to that which inhabits Alice over the course of her encounters. It's very successful.

A piano that plays by itself, inflatable objects, an electronic cat, flyy and elaborate costumes, objects that move without assistance and a magnificent fresco painted live.&nbsp ;

The voices of the characters are sometimes tampered with and the soundtrack is, as always with this trio, very successful.

Everything is weird today , says the character of Alice. And with good reason.

To appreciate Alice!, you have to have an open mind, accept not to understand everything and let yourself be carried away by the unique madness of Théâtre Rude Ingénierie. The play shakes the structures and that is very good.