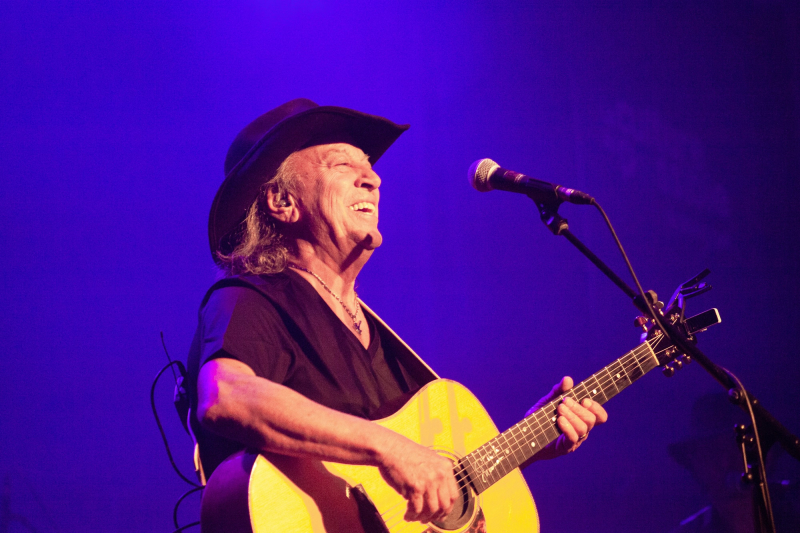 This week, my guest is Paul Daraîche, a Quebec country music singer, producer and director.

He performed songs with the greatest, from Ginette Reno to Charles Aznavour, without forgetting Hugues Aufray and many others. Come to think of it, that's quite a career for a little guy from Saint-François-de-Pabos, in Gaspésie.

Ok Paul, I'm going to t listen and talk to you. Paul, where are you from?

We are nine native children of Saint-François-de-Pabos, in Gaspésie, very close to Chandler and we lived in a house of 20 ft by 22 ft.

There was no electricity or running water at the house.

This luxury, I only experienced it once we moved to Montreal.

Tell us about your parents.

My father, Daniel, was a lobster fisherman and he also worked at the mill in Chandler. Dad worked very hard because he wanted to make sure we had food on the table. Often I rode him to his other jobs.

Music was popular at home.

My wonderful mother, Marie-Rose Aubut, was always there for us. Right now, talking to you, I hear him playing the harmonium or the harmonica. Because it was the sound of his music that resonated in the house.

My father loved to sing, and when we had visitors, he would take a chair and invite me to sing standing on the chair.

< strong>Describe your house for nine children and two adults.

On the first floor family life took place without forgetting that we only had oil lamps to light us. On the second floor were the bedrooms for the children. That is, rooms separated by curtains with the guys on one side and the girls on the other.

Did you do some sport in your youth?

In fact, music invaded my life, especially when I was given a guitar as a gift. We didn't have enough money for me to play hockey, and besides, I remember wearing white girl's skates to the rink.

The Jacques-Cartier Bridge was the gateway to paradise.

I am barely 8 years old and, for the first time in my life, I see a place lit by electricity. Once we arrived at the house in the Villeray district, we experienced the beauty of electricity which allowed us to see each other better. Mont-Royal and Sainte-Catherine streets were so lit that I thought I was in Las Vegas.

Your first jobs in Montreal.

I worked at Eagle Toys and then as a tailor for children's linens.

You were walking around on roller skates.

I left from our place, corner Saint-Hubert and De Castelnau to Marie-Anne and Saint-André. Let me make you laugh. My first car was a Volkswagen Beetle whose floor was so punctured that we could see the asphalt we were driving on.

(With a big laugh.) My first tour started when I was 17 and it's still going on.

This is the big departure for Abitibi.

I joined the group Les Loups Blancs when we were performing for a year in La Sarre without being paid.

One year no salary!

Let me explain. I thought we had a contract, but there was none, it was more like a tour that started on the farm of the girlfriend of one of the members, but still without a music contract.

I'm still waiting for the amount of your salary.

After a day of working on the farm, doing the train and taking care of of 75 cows, we accepted the restaurateur's offer.

That is to say?

On Saturdays and Sundays, we sang at his restaurant. In return, we were lodged and fed at her mother's for free. No salary as such, but on occasion the owner gave us money without his mother knowing.

You worked with your sister Julie.

My sister selling more than 50,000 tracks on four occasions of her new song, I joined her in order to make musical arrangements when launching his third song.

Country music has lived through the ages.

You have often participated in the program Jeunesse d 'today.

We were among the top 10 sellers, which allowed us to appear on the Today's Youth show on several occasions.

< p>I want to limit myself to your youth, but can you tell me about your meeting with Charles Aznavour?

I met him to invite him to sing in duet with me. Imagine the guy from Gaspésie making such a request. At one point I showed him the sheet music of his music from over 50 years ago that I had used to study. He gave me a big smile before accepting.

A moment filled with emotion.

More than 50 years ago, I met Robert Charlebois for the only time in my life in La Sarre when he presented his show Osstidcho. Recently, his son Jérôme asked me to perform the song Ordinaire as part of a tribute evening to Robert. I was so moved on stage and even more when Robert approached me to thank me for the beautiful interpretation of his song.

Are you afraid of travel by plane.

Yes! I have four children and six grandchildren… and a seventh soon. What a pleasure to sing with them! However, they travel by plane, while me and my love, by car, which includes 2000 km per week.

Your spouse is a wonderful woman.< /strong>

I have shared my life with Johanne Dubois for 33 years. His love for me and our children is phenomenal. Besides, my love for her is too.