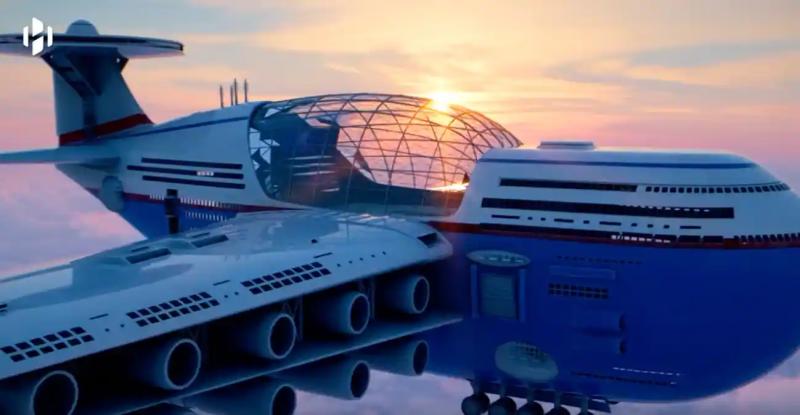 Able to fly or not, the design and animation of this video is compelling. Halfway between the cargo plane and the airship, passengers and crew will not be stuck in the millimeter spaces of commercial aircraft.

The idea of ​​this lavish flying hotel was revealed by Revealed magazine on its Facebook and YouTube pages.

Maybe in the not so distant future, we will be able to travel to this hotel instead of the liner, whose electrical energy is produced from a mini nuclear power plant. The idea of ​​small modular nuclear power plants is already gaining ground among companies specializing in the atom.

On board, there are all the advantages of the ocean liner; theatre, wedding chapel, swimming pool, game rooms, restaurants, a large commercial area, all medical services and even a huge panoramic gondola from which passengers can have a breathtaking view of the sky.

Seven years in the air, without refueling!

The 20 electric reactors powered by the nuclear power plant will meet all the propulsion needs and services of the aircraft-hotel. Anti-turbulence systems will magically erase air pockets and other instabilities.

To provide supplies (food, water, etc.) to the flying hotel and to get passengers up and down who, as we can imagine, will not spend seven years in the air, commercial planes will be added to it – a bit like fighter planes refueling with kerosene under a military cargo plane.

This is how the hotel plane will be able to stay in the sky for so long, without touching the ground.

Bravo to science communicator Hasheem Al-Ghalli based in Germany who directed and animated this splendid video.