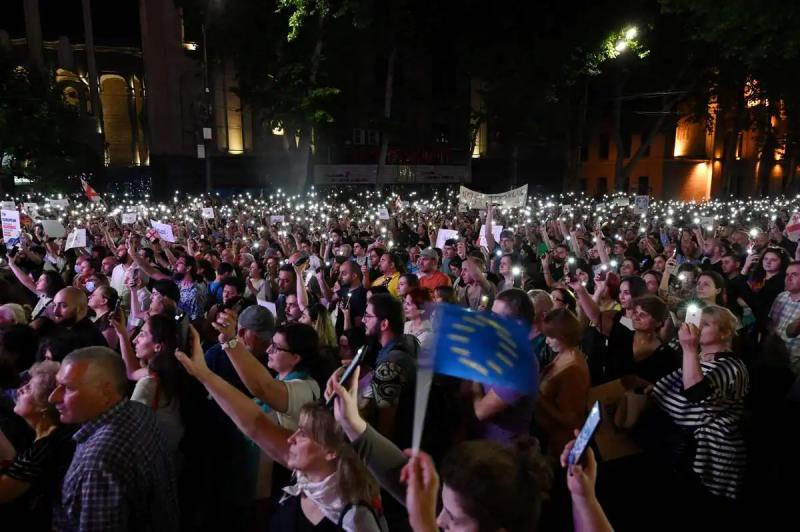 Tens of thousands of demonstrators marched in Tbilisi, the capital of Georgia, on Monday to demand that this former Soviet republic in the Caucasus join the European Union.

Waving European and Georgian flags, around 60,000 demonstrators, according to an AFP journalist, gathered in front of the Georgian parliament, days after the European Commission's recommendation to wait before grant Tbilisi the status of candidate for membership.

Several pro-European organizations and all opposition formations had called for a “march for Europe” Monday evening in Tbilisi, in order to “prove the commitment of the Georgian people in their European choice and in Western values” .

“Europe is a historic choice and aspiration for Georgians, for which all generations have made sacrifices,” organizers said in the statement.

“Freedom, peace, sustainable economic development, the protection of human rights and justice are values ​​that unite us all and which would be guaranteed by integration into the European Union,” they added.

One of the organizers, human rights activist Shota Digmelashvili, read a manifesto announcing another rally on Friday and the launch of a “new people's movement” that will include opposition parties but be dominated by civil activists.

“We will make our demands to the government and if it does not meet them, non-violent resistance will sweep away all those who are derailing Georgia from its European path,” he said .

One of the protesters, writer Malkhaz Kharbedia, 47, said “every Georgian must take personal responsibility for our European hope to come true”.

“We took to the streets today. today, because the time has come to rely only on ourselves, not on someone else, the time of our personal responsibility, of our efforts, of our unshakeable will, of our perseverance,” he said. he told AFP.

For another demonstrator, Lili Nemsadze, a 68-year-old biologist, “denying Georgia the status of candidate (for membership) to the EU will mean that we will remain in Russia's sphere of influence”. Russian President Vladimir Putin will interpret this as a green light to invade Georgia again.”

Twice annexed by Russia, in 1801 and 1921, Georgia was invaded in 2008 by Russian troops in a brief five-day war that left around 700 people dead. Russia also backs two breakaway territories in Georgia.

Monday's rally aims to send a signal to Brussels, as EU leaders are set to discuss whether or not to grant candidate status this week. official to Georgia, as well as Ukraine and Moldova.

If the European Commission gave a positive opinion concerning Ukraine and Moldova, it nevertheless considered on Friday that Georgia must first carry out reforms, in particular political ones, before being able to claim this status.

< p>The EU executive has recommended that Georgia be “offered the prospect of becoming a member of the European Union”, a situation which however has no legal value.

“It is up to Georgia to speed up (reforms) and move towards this open door,” commented Commission President Ursula von der Leyen.

The Georgian Dream Party, in power in Tbilisi, said it was “happy” to have a “concrete roadmap”, but considered it “regrettable” that the Commission does not support candidate status now. /p>

On Friday, Prime Minister Irakli Garibashvili also welcomed “the historic decision to give Georgia a European perspective”, adding: “We will work with Brussels to implement all the requirements and we will obtain the candidate status”.

The Georgian government has come under increasing criticism over the human rights record in recent years, with NGOs expressing concern over the decline in freedom of expression .

The European Commission has stated that the conditions Tbilisi must meet to be placed on the formal path to membership include an end to political polarisation, progress on media freedom, reforms judicial and electoral as well as “de-oligarchization”, the fight against the stranglehold of certain oligarchs on whole sections of the economy.