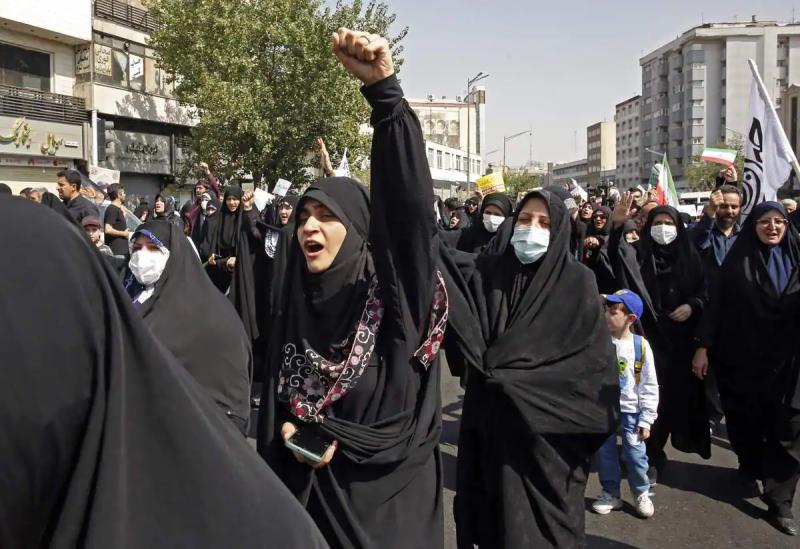 Thousands of people marched in Iran on Friday at the call of the authorities to defend the wearing of the veil and denounce the “mercenaries”, after a week of protests sparked by the death of a young woman arrested by the police, which left at least 17 dead.

While NGOs abroad have denounced a “brutal” repression of demonstrations in Iran, internet connections there are still very disturbed on Friday, with the blocking of WhatsApp and Instagram.

Mahsa Amini, 22, was arrested on September 13 in Tehran for “wearing inappropriate clothes” by the morality police responsible for enforcing the Islamic Republic's dress code. She died three days later in hospital, and her death sparked nightly protests in major cities in Iran including the capital Tehran.

State media on Thursday reported the death of 17 people in these protests, but NGOs, such as the Center for Human Rights in Iran (CHRI) based in New York, put forward higher tolls. “Independent sources speak of 36” deaths, the CHRI said Thursday evening on Twitter.

“The government responded with live ammunition, pellet guns and tear gas, according to videos shared on social networks,” CHRI said in a statement.

The Kurdish human rights organization Hengaw reports that the security forces fired during the night from Thursday to Friday with “'semi-heavy' weapons” at demonstrators in Oshnaviyeh (north-west), without specifying the what weapons they were.

In several cities, demonstrators clashed with security forces, burned police vehicles and chanted anti-government slogans, according to media and activists.

A demonstration in memory of Masha Zhina Amini in Los Angeles.

Police arrested an unknown number of people, Iranian media reported. Among them are activist Majid Tavakoli and journalist Nilufar Hamedi, according to those around them.

The most viral images on social networks are those where we see Iranian women setting fire to their headscarves. In Iran, women must cover their hair and are not allowed to wear short or tight coats or jeans with holes.

On the sidelines of the UN General Assembly in New York on Thursday, Iranian President Ebrahim Raisi promised an investigation into the death of the young woman, while specifying that the medical examiner had not mentioned any abuse on the part of the police, which the demonstrators contest.

Faced with the protesters, described as “counter-revolutionaries”, “rioters” or “plotters”, the authorities have decided to retaliate by organizing their own manifestations after Friday prayers.

At the call of an organization responsible for organizing official events, thousands of people marched in several cities in Iran, including Tehran, Qom (north) or Isfahan (center).

In the capital, hundreds of people, including women in chadors, demonstrated with flags of the Islamic Republic, placards of support and thanks to the forces order, according to state television.

“Death to the plotters”, “Advocating the end of the veil is American policy”, could be heard as slogans.

The Friday prayer imam called for protesters to be punished “with the weapon of the law”.

Praising the “efforts and sacrifices of the police”, the Revolutionary Guards, l ideological army of the Islamic Republic, for their part assured that the recent “conspiracy of the enemy” would be “doomed to failure”.

The authorities had reported Thursday the death of five members of law enforcement.

For his part, the head of the judiciary, Gholam Hossein Mohseni-Ejei, warned that “those who have damaged public and government property, disobeyed the police or being linked to foreign spy services” should be treated “without any leniency”.

After the start of the demonstrations on the evening of September 16, the power reduced access to the Internet and since Wednesday blocked access to Instagram and WhatsApp.

This measure was taken because “of the actions carried out through these social networks by counter-revolutionaries against security. national tee”, according to the Fars agency.