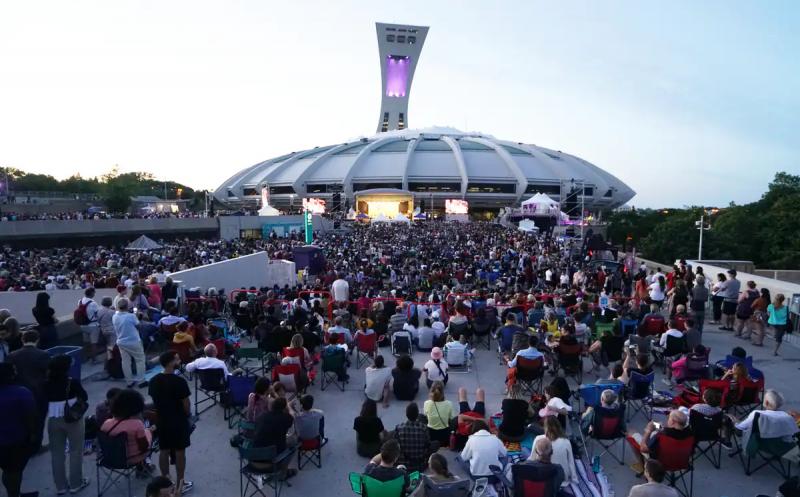 Maestro Rafael Payare offered an original and eclectic kick-off to the ninth edition of the Classical Spree. Featuring artists and composers from here and elsewhere, from different nationalities on both sides of the Americas, the concert celebrated the plurality of cultures and the richness of the musical repertoire of this vast territory.

Animated by Magalie Lépine-Blondeau, spokesperson for the event, the inaugural concert took place on a radiant end to the day. The Olympic Park Esplanade was completely filled with classical music fans eager to meet the OSM's new conductor.

Entitled In the colors of the Americas, the concert presented itself as a beautiful and audacious amalgamation of symphonic music, Aboriginal sacred song, reading, musical comedy, cycle of melodies and symphonic poetry.

From the United States to Canadian Indigenous Peoples

As a opening, the choice of the OSM's new music director, who was on his first Classical Spree, fell on the Allegro con fuocofrom Symphony No. 9, known as the New World Symphony, by Antonin Dvořák.

First work that the Czech composer created during his stay in America, this symphony appears as a judicious choice in order to represent an important part of the musical richness of the Americas knowing that this symphony would translate the admiration of the Czech composer for the spirituals< /em> and songs of African-American slaves on the plantations.

After the 81 musicians, elegantly dressed in white shirts and tuxedos, settled down and tuned their instrument, the maestro came forward to meet the general public and his musicians before they began the famous work, recognizable from the first notes, evoking for some the theme of the film Jaws by John William. A superb succession of melodies, sometimes calm, from which sometimes emanated a great sweetness, sometimes more impetuous.

Innu poet Natasha Kanapé Fontaine then came to recite a text in her language, addressing her “Country Mine”, and singer Jeremy Dutcher, from the First Nation Tobique, turned out to be touching by delivering an ancestral song in Wolastoqey (Maliseet), skillfully supported by the orchestra.

Then, it was the turn of the Venezuelan trumpeter, Pacho Flores, to come on stage for the Concerto Venezolano,specifically composed for him by Cuban-American saxophonist Paquito D’Rivera. There were several interesting dialogues between the orchestra and the trumpeter, or the transverse flute and the woodwinds, delivered at times with languor or in a much more energetic way, then supported by the snare drum, but the highlights began with the arrival of a cuatro, a small Venezuelan guitar with four strings, while Payare continued to lead the orchestra gently, then with passion. Great moment also during the solos of Flores and a flamenco passage of the cuatristra before a superb grand and very festive finale punctuated by maracas, putting the Venezuelan rhythms very much in the forefront. A good part of the crowd immediately stood up.

The conductor then led his instrumentalists with great enthusiasm on the Bernstein's Symphonic Dances, from the musical West Side Story, before the superb soprano Jeanine de Bique, originally from from Trinidad and Tobago, come and sing

the words of Toni Morrisson on a cycle of songs from Honey and Rue by André Prévin.

The concert finally ended with a discovery for many, the magnificent symphonic poem Santa Cruz de Pacairigua by Venezuelan Evencio Castellanos< em>, delivered with great softness and sensitivity.