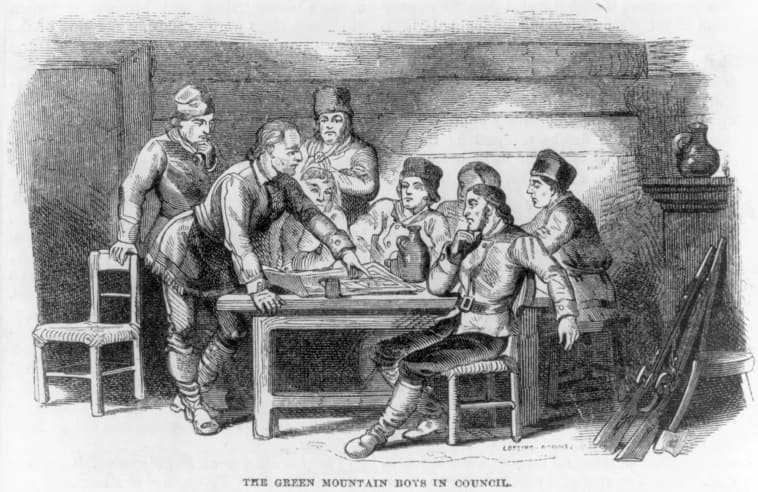 The management of the Canada-US border is regularly in the news. I propose today a return to a time when this border was poorly defined, more specifically the segment bordering what is now Quebec.

Meeting of the Green Mountain Boys.

As early as the American colonial era, the inhabitants of a strip of territory first developed by inhabitants of New Hampshire, then linked to the colony of New York, wanted to obtain an independent status.

C' Thus, in 1777, what was first called New Connecticut, simultaneously declared its independence from New York and Great Britain.

The small republic had a local militia, the Green Mountain Boys, led by Ethan Allen, the patriot who will capture Fort Ticonderoga along with Benedict Arnold. This event was the first aggressive action by American settlers during the Revolutionary War.

The Republic of Vermont never obtained recognition from the Continental Congress (the Legislative Assembly of the Thirteen Colonies). After briefly considering joining the British on Canadian territory, Vermont instead became an American state in 1791.

Unfinished painting of the signing of the 1783 Treaty of Paris. The British commissioners refused to pose. We see from left to right: John Jay, John Adams, Benjamin Franklin, Henry Laurens and William Temple Franklin.

The creation of the “Republic of the Porcupine” (translation of the Micmac word Madawaska) results from a vagueness of the treaty of Paris of 1783 which marked the end of the war of independence of the thirteen colonies.

The territory claimed was at the junction of Maine, New Brunswick and present-day Quebec. It was American settler John Baker who became the main activist, going so far as to draft the equivalent of a constitution and raise a flag.

The tensions were such that the situation degenerated to the point of leading to the Aroostock war, the “pork and beans war ” (most of the menu of the loggers who populated the region).

This confrontation, which the British and American leaders wished to avoid, was resolved through diplomatic channels and no deaths were reported.

Here again, it is the vagueness of the 1783 treaty that explains the birth of the Indian Stream Republic. After the War of Independence, both the British and the Americans claimed this territory located between Lower Canada (Quebec) and the state of New Hampshire.

Tired of being taxed by both sides, the small community declared its independence in 1832, without knowing who it was officially separating from! It is an occupation by the New Hampshire militia which will force the inhabitants to recognize the American authority.

If you cross New Hampshire, it is this small community of barely 300 inhabitants which is the origin of the city of Pittsburgh.

Ratification of the Webster-Ashburton Treaty of 1842.

The existence of these self-proclaimed republics was short-lived and it was the Webster-Ashburton Treaty that sealed their fate. Not only did this treaty distribute land to each of the parties involved, but it was also seen as a significant improvement in relations between England and the United States. The old metropolis and the young republic fought a war between 1812 and 1814.

The only real losers in this agreement were, once again, the First Nations. Not only did we have to accept the benefits of the treaty, but we never consulted them.