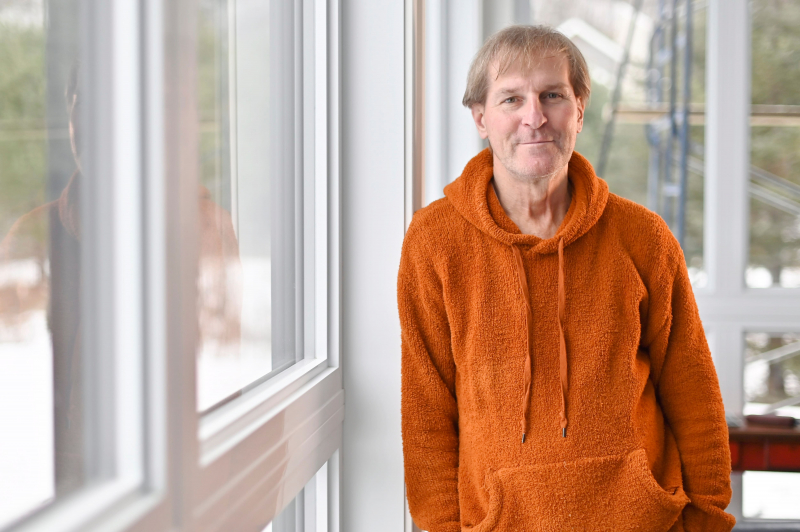 Letting his whimsical imagination run free, the talented Jean-François Beauchemin presents this fall a new collection of very short stories, Three Years on a Bench. With him, very few words are enough to bring out a whole universe. The texts dealing with different themes navigate between reality and fiction. They are inspired by the words and confidences of characters who would have shared the same bench as a writer, over the days. So many unexpected encounters and confidences!

This collection is a continuation of his excellent collection Bad weather for the emotional. It contains finely crafted little stories that are alternately funny, tender, poignant, surprising and eccentric, always moving.

There is a mountaineer saved by a panther, a journalist who attends a private concert of George Harrison, a lumberjack rescued by his horse. There is also talk of a miracle on the shores of Lac Saint-Jean and of a diver swallowed by a whale. Fiction or reality?

Jean-François Beauchemin, skilful storyteller, skilful narrator, skilful writer, creates a sort of theatrical spectacle for readers, to move and surprise them. “I say at the beginning that it is an assembly of unusual stories. That's what makes it interesting: stories that are a bit out of the ordinary,” he says in an interview.

And the magic of literature works : many extraordinary things can happen on our beautiful planet!

Jean-François Beauchemin says that he is naturally a very social being.

“I'm not afraid of people. When I go grocery shopping, I talk to people in the aisles. It's totally my type. I am like that in life. I speak easily to people and I arouse confidences.”

He specifies that he applied the same approach for Trois years on a bench than for his other books written over the past 25 years.

“I always look to do better than the last one. My goal is to create beauty with words. By doing this, at the same time, I also try to create emotion and it is possible, also in passing, a little bit of reflection. When I think I've achieved those three things in my job, well, I'm happy.”

In Three Years on a Bench, it's more true than ever , he said.

“I'm starting to gain experience. I have a few books behind the tie. I'm also getting older – I'm 62 years old. And I am starting to deepen this kind of reflection, of approach. This book is perhaps the most accomplished of all that I have written to date. I touched on something I had been looking for for a very long time.”

“ Just as I was turning the key in the lock and about to go home, a brick fell off the front of the house. house to come and shatter to pieces at my feet. “Do not enter this house, was probably trying to tell me the guardian angel who I am convinced is watching over me. Do not come back. Misfortune awaits you on the other side of the door.” But God knows why, I ignored that warning and crossed the threshold. »