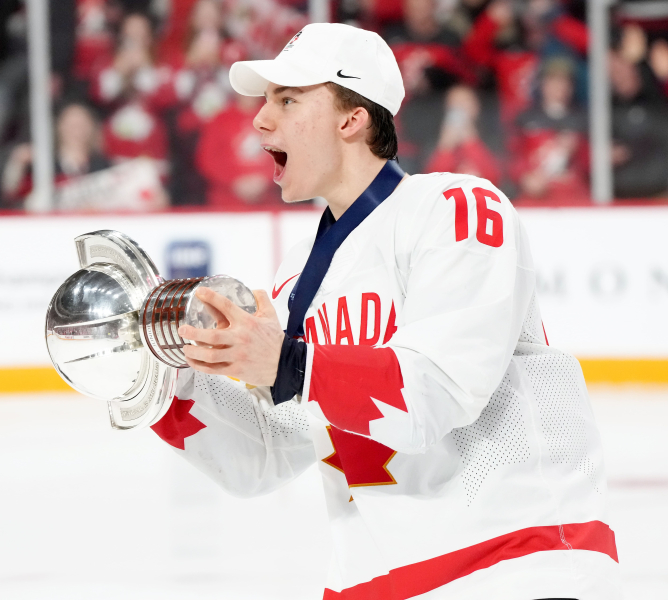 Connor Bedard has confirmed what all observers have been saying for a few years.

He is an exceptional player.

His performances at the World Junior Hockey Championship have fueled conversations. Those who saw him in action for the first time quickly understood that the National League is about to welcome a gifted man.

The question: which team will win the lottery?

In Chicago: we dream. In Columbus: same thing. And in Montreal, can we dream? No doubt.

Every day, we analyze the probabilities. The abacus will determine which team will reach out to a concession player.

It is quite obvious that the repeated failures of the Canadian make react. Suddenly, the team finds itself in an interesting situation especially since it could take advantage of “two lottery tickets” if ever the Florida Panthers, lagging behind in the race to obtain a pass for the spring tournament, are getting bogged down more and more.

The 2023 vintage has enough to make the league's teams salivate. We believe that the first five players selected, if obviously we make the right choice, could graduate quickly in the National League.

And for an organization that decides to do a facelift, as is the case for the Canadian, it is very attractive.

So, by March 3, deadline to complete the player transfers, we risk having several surprises.

In Vancouver, we will wait for the result of the Canucks' trip before making the decision if we make a major shift towards a relaunch of the franchise.

In St. Louis, Doug Armstrong is a very cunning general manager and he finds himself in an unexpected situation. The prospect of missing the playoffs should be considered especially with Ryan O'Reilly and Vladimir Tarasenko sidelined for several weeks.

There are deals that could make the trade market even more intriguing.

While the general managers had received, a few months ago, a message from Gary Bettman that the salary cap could rise to $86 or $87 million as of next year, now the league and the commissioner come to cool the ardor of the decision-makers by affirming that we will possibly stick to an increase of only one million.

It changes the game!

In the meantime, among the leaders of the Canadiens, we are delighted with the exceptional performance of Joshua Roy who stood out at the World Junior Hockey Championship. His versatility has earned him praise from the coaches of the Canadian squad.

He competed with intensity, he fulfilled all the missions entrusted to him. He completed a perfect pass on the gold medal goal. In short, one can imagine that, in the assessment of the decision-makers, he has climbed several rungs…

Kaiden Guhle will have to absent for a period of two months. Maybe more. Too bad, because he was the best defender on the team and it must be admitted, this injury will surely not help the Canadian out of the slump in which he is entangled in his own territory.

Sean Monahan will miss another two weeks, so interested teams will have to wait to find out if he'll be able to help them late in the season.

And rumors the Oilers are keeping an eye out on Mike Matheson are they well founded?…

Juraj Slafkovsky is going through difficult times, which some say are worrying. Obviously, the mistake made on Thursday by the rookie Canadian player only raises questions.

Should we give him a metro ticket for Laval? Should he have participated in the World Championship?

I still believe that the decision makers of the Canadian made the right decision.

The Colorado Avalanche have suffered five straight losses. Should we be worried in Denver?

I don't think Joe Sakic and Chris MacFarland are about to press the panic button. Nathan MacKinnon is back, the other injured are about to join the team.

In the case of Gabriel Landeskog, there is no date given for his return and it is also the case for Josh Manson and Bowen Byram, two important defensemen of the formation.

The problem is that in the Central Division, the Stars win, the Jets and the Wild too. Are we going to try a smoking gun? We're looking for a center player…

Well. Max Pacioretty is finally back. Six shots on goal, over 16 minutes of playing time and a minus one differential.

The Hurricanes suffered a 5-3 loss to Jusse Saros who pushed back, hold on well, 64 of 67 shots made by Rod Brind'Amour's squad.

Sidney Crosby hit the 20-goal plateau Thursday night in Las Vegas, but his team is in freefall.

Three wins in the last 10 games, two points shy of qualifying for the playoffs. The New York Islanders are now ahead of the Penguins and in the Eastern Conference, the Buffalo Sabers and Detroit Red Wings are tough opponents…

Alexander Ovechkin is on fire. He scored his 29th goal of the season on Thursday night, his team is 7-1-2 in the last 10 games and, in the coming days, the Capitals can add Nicklas Backstrom and Tom Wilson. Defenseman John Carlson is progressing, but it's unclear when he'll be able to return to action. We doubted the Capitals, but Charlie Lindgren, the former goalkeeper of the organization of the Canadian, largely contributed to the success of the team…