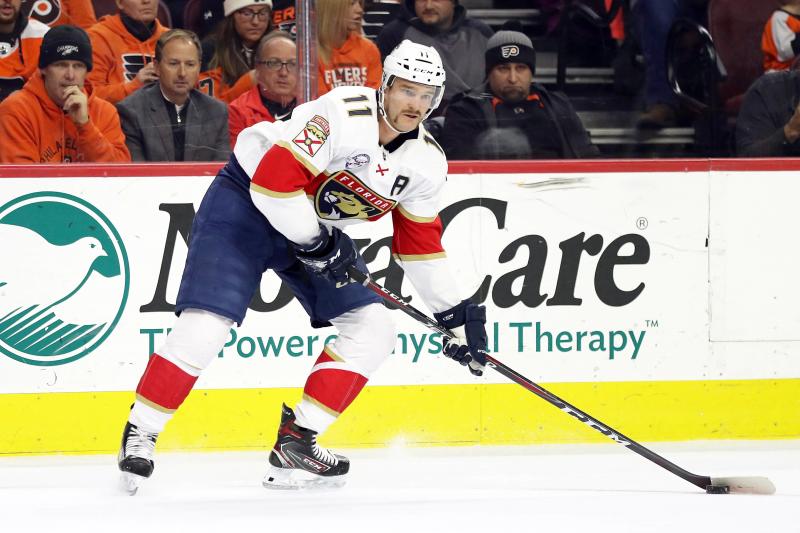 The Florida Panthers and Bill Zito had made the decision to trade Jonathan Huberdeau…even though the Calgary Flames had shifted discussions about Matthew Tkachuk to another team. Huberdeau was preparing to play the last season of his contract… and, in the end, he was going to demand an agreement as important as that granted to Aleksander Barkov, that is to say 10 M$ per season.

It's now the new trend…

Do you believe that Patrick Kane will accept a contract less than the one he signed with the Chicago Blackhawks several years ago. Next year, unless Kane moves on to another team, he will be the most coveted skater in the unrestricted free agent market.

We could add Nathan MacKinnon's name, but maybe- we imagine MacKinnon in a different uniform than that of the Colorado Avalanche? Can we think for a moment that Dylan Larkin will not sign a contract binding him to the Detroit Red Wings for eight seasons?

So we are talking about big numbers.

Zito and the Panthers decision makers were bitterly disappointed with their playoff results. Twice, the Panthers lost against the Tampa Bay Lightning.

Would they continue the adventure with two skaters like Barkov and Huberdeau, two attackers monopolizing more than 20 M$ of the payroll?

The Toronto Maple Leafs chose this option. They don't have two $10M players, but three and yet the results have been catastrophic under the circumstances and the patience of the owners is increasingly fragile. Hit or miss. If the Leafs don't meet major shareholder goals, heads will roll.

In Florida, Zito put a little more two years to pull the organization out of the quagmire in which it was mired, a remarkable feat. He therefore did not hesitate for a moment when the Flames offered him a trade involving Matthew Tkachuk and Huberdeau.

He takes a risk. He deviates from his original plan. On the other hand, Tkachuk, which cost him a fortune, brings a new dimension to the attack of the Panthers. He gives a different personality to the team. Zito is a far-sighted general manager, he had made sure before making the decision with the most serious consequences since his arrival at Sunrise to liquidate a few veterans.

In the meantime, Huberdeau will be able to study a few scenarios.< /p>

Next season, the list of players wishing to take advantage of their player status can continue their career with the team of their choice is impressive. Jonathan Toews, Kane, Huberdeau, MacKinnon, Larkin, David Pastrnak, J.T.Miller, Matt Dumba, Vladimir Tarasenko, and Ryan O'Reilly, among others.

But, in light of the events of this season, one could not overlook the bargains that will be available to teams with millions to spend.

Over the past few months, it was expected that some formations are trying by all means to give more flexibility to their payroll.

And, with a salary cap that does not t has undergone little change over the past few years, the trend is bound to continue.

A former judge will decide

Thus, the former justice of the Supreme Court of Canada, Thomas Cromwell, is entrusted with the mandate to study, analyze, and decide on the Hockey Canada file.

We submitted a few questions to him and he will have to decide on the system that Hockey Canada should adopt.

In other words, after analyzing the situation, the judge will be asked to rule on the management of Hockey Canada.

Does hockey in Canada deserve a system that has just been engulfed in scandal because unscrupulous executives tried to cover up events by spending taxpayers' money and sponsors who had associated themselves with an important cause ?

The judge may also consult a few colleagues. He knows very well that following the latest information and the way the leaders of Hockey Canada have behaved in this file, major changes are necessary.

And hopefully we find a new formula for the development of hockey in Canada. In this regard, we have to believe that Mr. Justice will need the expertise of certain people with strong ideas on how Hockey Canada should operate…

Time is running out

Time passes and Nazem Kadri is still getting his ears pulled.

But the number of teams interested in obtaining his services is probably not as large as when the free agent market opens. John Klingberg, for his part, quickly realized that he had to make a decision last week.

He expected to land a seven-year contract.

He takes the manager of Anaheim for a year.