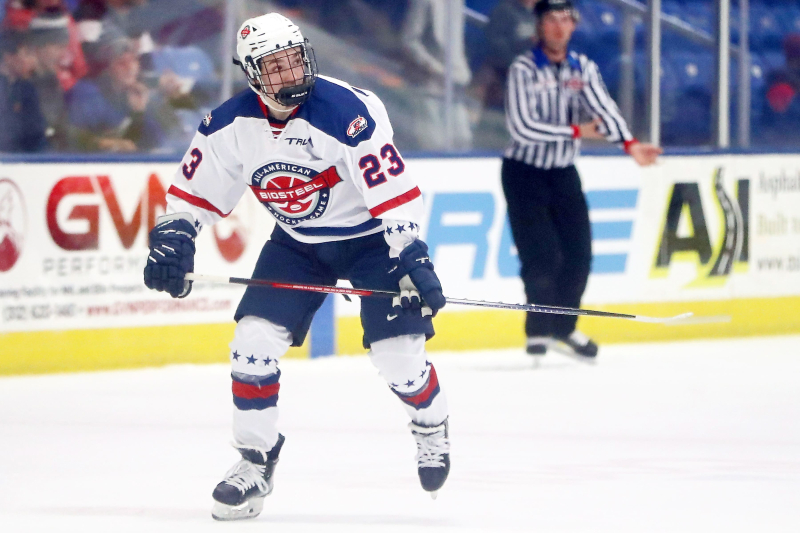 The World Junior Hockey Championship will always hold attention because it's an opportunity to get to know some of the Canadiens' prospects, those whose merits we like to praise.< /strong>

There are six participants in this competition which took off yesterday in the Maritimes.

Joshua Roy's name has already attracted attention at the camp. coaching. He is an example of perseverance and determination. He bets on his talent and he is not afraid to take the competition to a higher level when the moment demands it.

He already stands out among the players of the Canadian squad. He was chosen by the Habs in the fifth round of the entry draft and yet he could make an impact during this competition. This is his second participation in the World Championship and what sets him apart from the group is his versatility.

Will he be able to break through the Canadian squad one day? It can be used in all sauces. He's a natural scorer, but he can also do a much-appreciated job when his team is outnumbered.

This is an advantage.

We know Roy. At least, we saw him at work as much in the Quebec Major Junior Hockey League as in training camp, not to mention his time at the international level.

The most intriguing remains USA defenseman Lane Hutson. A second-round pick from the Canadiens, a defender who, they say, is in a class of his own.

Can you walk into the National League with a toolbox as full as the one he carries in the American college ranks? This season at Boston University, he has 18 points, including seven goals, in 16 games.

Since the start of the season, Hutson has been showered with praise from the from observers. Some say his style is akin to Cale Makar, Quinn Hughes, Adam Fox.

Impressive. But what we want to see during the world tournament is Lane Hutson, the one who adapts to all situations, the one who progresses at a crazy pace, the one who has an exceptional vision of the game.

Forget the comparisons. Sometimes we allow ourselves to be influenced by the reports of certain observers, but sometimes the reality is quite different.

I recognize that, in the case of Hutson, one is tempted to switch to the side of the observers. Some even say he's a hockey genius because of his ability to handle adversity with overwhelming confidence.

Except we don't can't deny that his size raises some questions leading to some reservations.

We saw Filip Mesar in training. A talented player, but who needs to polish his game in the minor leagues for a few more seasons.

Engström, Kapanen and Rohrer could take advantage of this forum to improve their evaluation among those responsible for development at the Canadian .

Quickly, a look back at the pre-Christmas game, the one played between the Canadiens and the Dallas Stars.

For the first time in ages, Cole Caufield has moved on with a new center, Kirby Dach, rather than Nick Suzuki. A surprising decision, but good. And Suzuki, meanwhile, has made up with Jonathan Drouin and Joel Armia, two players totaling eh… zero goals.

But, despite these changes on the part of Martin St-Louis, the Canadiens played well, for almost two periods before plunging, once again, into indiscipline.

Worse still, the culprits n did nothing to convince observers that they deserved their trust. Players who have had no impact in the squad so far.

But, in his case, one can hardly condemn his commitment so far.

Oh, Chris Wideman gets a penalty in the third period as we try to tie the score for his teammates. And, let's add a misconduct penalty for having made not very Catholic remarks towards one of the two officials.

Indiscipline manifests itself in every game. One would think that the coaches had taken action on the behavior of the skaters, but either the players did not pay attention to the coach's comments on the subject, or the coaches attacked the problem without insisting too much. .

We are now entering the last phase of the regular schedule. Over the next few weeks and games, the competition will be even more intense, and the deadline for making transfers in terms of squads will fuel conversations.

There will be changes. There will be star players who will change addresses: Jonathan Toews, Patrick Kane, Bo Horvat, John Klingberg… The Connor Bedard derby will invite teams with no chance of making the playoffs to review their business model and to let go of a few important players from their training.

At the Canadiens, it could be very interesting. Jeff Gorton and Kent Hughes will not turn their backs on an offer to allow the organization to go even further in the current process.

And don't forget that Hughes has repeatedly said that he must make payroll more flexible.