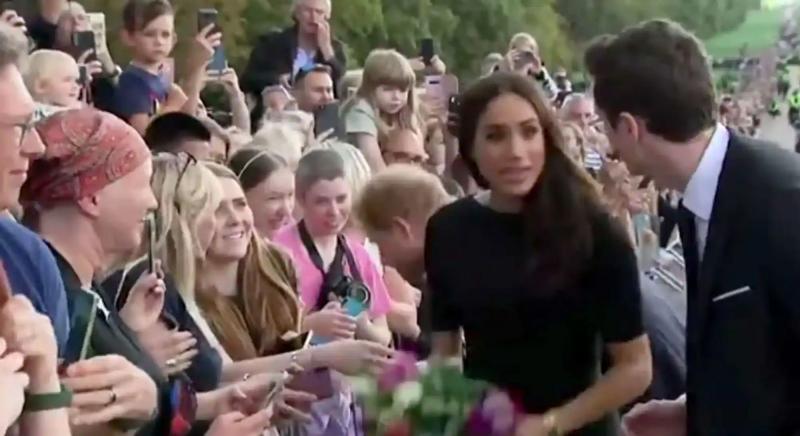 Meghan Markle responded in a strange way to a Crown employee who wanted to help her with flowers given to her.

The video that was filmed outside Windsor Castle on Saturday shows Meghan Markle holding flowers donated by the public in her hands.

A male employee approaches her to unload the bouquet. Meghan looks at him harshly for a split second, before putting on a kind face.

She appears to tell him that she wishes to place the flowers herself, before turning to continue waving to the crowd.

The first aide tried unsuccessfully to take the flowers from her. pic.twitter.com/4w32pNPrek

A few moments later, another employee comes up to her and offers to take the flowers. If Meghan seems to resist once again, the employee explains the situation to her. Meghan will finally give her the flowers.

The big guns had to step in when Meghan refused to let go of the flowers the first aide tried to take from her as she herself wanted to walk them over to the other tributes. #meghanmarkle pic.twitter.com/Sqx9qq6w2Z

Several Twitter users have commented on how he does it.

“She wanted attention, but her ambitions were held back by people who knew exactly what she was trying to do,” one viewer tweeted.

“ She probably wanted to be filmed placing flowers there, so we could see her in action. In fact, if you think about it, she really is a narcissist, always trying to do everything for her at every opportunity!” adds another user.

Other people gave Meghan the benefit of the doubt, saying she was just trying to mourn the Queen in peace and in her own way.

“I can't not believe the bullying of Meghan has already started! It's the first time she's done this type of outing, she's doing her best,” judged a surfer.

“She probably didn't understand that the flowers are removed for security reasons. After all, there could be a small explosive device, nerve gas, poisonous insect, any number of things, hidden in there,” said another person who says they know royal protocol.

“Oh my God… Leave that poor woman alone. Breathe… Be happy that the whole world isn't weighing down every move YOU make. That's enough! another person wrote.

Markle, 41, and Harry, 37, joined William and Kate, both 40, to lay flowers outside Windsor Castle to pay tribute to Queen Elizabeth II.