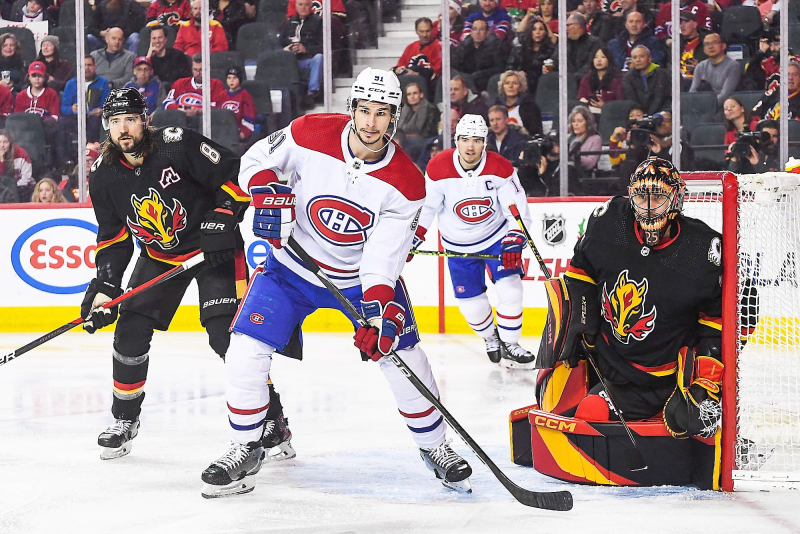 The Sean Monahan file is attracting more and more attention, and , for Kent Hughes, it is a situation offering several options, which every negotiator covets.

So far, Monahan has proven to be a smash hit from Hughes. He obtained a conditional first-round pick and also welcomed a center player with a solid size and an interesting track record to Montreal.

In preliminary plans, he should be in transit at Montreal.

However, an unrestricted free agent, Monahan, warmly applauded by Flames fans on Thursday, fueled discussions in the offices of several teams.

It is clear that he has regained form…

He has lost none of his determination. Didn't he face the Flames despite a foot injury?

Is he a player respected by everyone in the locker room? Certainly.

The Canadiens' decision-makers recognize that he makes a special contribution to the organization's recovery program, on the one hand through his actions on the ice and on the other through his behavior and his influence inside the locker room.

For any team looking to acquire a veteran, still in their twenties, to give even more depth to the staff already in place, he is an interesting candidate. The catch: are you willing to give up a first-round pick for a rental player?

Should Hughes identify Monahan as the veteran on whom the development and recovery program of the organization? If so, what about Christian Dvorak? Let's always keep in perspective that Kirby Dach was secured in order to play a starring role at center.

For now, the GM's strategy is patience since, in the facts, as is often said, he is in the driver's seat.

Barring an unexpected turnaround, it's clear that interest in Monahan will come from high-level teams as well as rosters vying for playoff qualification, also from organizations that want to make sure they have the manpower required to complete at least two rounds.

Therefore, a first-round pick will give Hughes more bargaining power with the goal of being among the top five teams looking to acquire the top prospects of the 2023 crop. But this choice will not allow him to gain ranks unless he adds another first round choice, Hughes already has two, his own choice and that of the Florida Panthers (Ben Chiarot).

Except that, in the environment of the Canadian, with the objective of developing young skaters, a veteran as qualified as Monahan invites reflection.

Hughes will adapt to events, after which he will make a decision. Remember, when he acquired Monahan, he saw it as an opportunity to add to his squad a veteran who, before spending almost two years in the infirmary, was considered one of the most influential members of the Flames, and, more importantly, he had no monetary commitment to meet for the next few years.

So it was a placement based on the March 3 deadline. where league rosters must complete the roster.

We have to believe that the objectives remain the same and that Monahan's performances, between now and March 3, will provide the arguments for the decision that will be made Hughes.

For the moment, the plan is respected.

Gerard Gallant's remarks about Alexis Lafrenière and Kappo Kakko, their rather mixed successes compared to Jack Hughes, for example, of the New Jersey Devils, are interesting.

Gallant is singled out for the slow and disappointing progress of the two young Rangers players. In the greater New York area, the game of comparisons is quick to fuel discussions.

While Hughes hits the bull's eye with the New Jersey Devils, Lafrenière and Kakko struggle to stand out. Gallant responds to criticism.

“  I am satisfied with the effort and behavior of our two young players. In the case of Lafrenière, any comparison with Hughes is lame, says Gallant. Alexis, since arriving in New York, hasn't had as many minutes on offense at five as Hughes in New Jersey.

“Alexis, and in this respect Kappo, these two players have to wait their turn. In front of them is [Artemi] Panarin, there is [Chris] Kreider, there is [Mika] Zibanejad, he adds. Upon arriving in New Jersey, Hughes didn't have to dislodge such seasoned veterans. »

Perhaps the example could apply to Juraj Slafkovsky.

Should he have a spot on the first power play unit? Is Mike Hoffman, when he puts on the uniform, more important in the plan put in place by Jeff Gorton and Kent Hughes than Slafkovsky?

The first choice of the CH disputed, Thursday evening , his best game of the season. Tied numerically, Sean Mohahan guided Josh Anderson and Slafkovsky brilliantly. The results were amazing.

An experience to be repeated with even more responsibility in Slafkovsky…