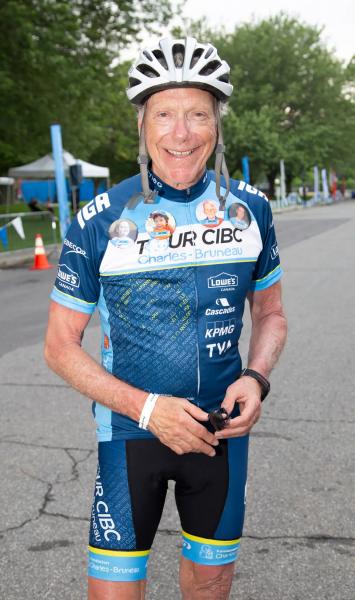 Pierre Bruneau may have retired after 46 years as an anchor at TVA, but he's faithful to the job for the start of the Tour CIBC Charles-Bruneau this weekend.

“It's a lifelong mission and I'll be here as long as I have the energy,” he said in a generous interview. telephone.

After a symbolic departure from the CHU Sainte-Justine Cancer Center on Saturday morning, Mr. Bruneau, 70, will travel to Matane by bus with 34 other cyclists to begin a 1,000-kilometre journey to Boucherville in six days on Sunday. .

“I am 70 years old. It's just a number, but there's a reality that comes with it, he admits. It represents a challenge for me every time.”

“I'd rather be a young old than an old young,” adds the man, laughing heartily, his voice having marked the newscasts for many years.

Mr. Bruneau will take it all one year at a time, he who is in his 25th participation in the Tour Charles-Bruneau in as many editions.

“The objective is also to ensure the sustainability of this foundation, he says. You know, Pierre Bruneau will not last forever. I have an expiration date. Now the goal is to have something in place that will always allow more children to be healed.”

It was obviously his son Charles' dream to be cured of cancer, but his death from leukemia in 1988 was followed by millions raised for other children. Again in 2021, the Tour CIBC Charles-Bruneau raised $4.7 million. Despite the pandemic, which has been very difficult for charitable events, the Charles-Bruneau Foundation is staying the course with its historic commitment, announced about a year ago, of $25 million in research by 2026.

“The pandemic has had consequences and we have to re-motivate people, agreed Mr. Bruneau. This is our commitment and we are very proud of it. We are on the right path. We still have until 2026 to honor it.”

A record number of registrants

The organizers of the Tour CIBC Charles-Bruneau will have redoubled their ardor for the 2022 edition, which counts on a total of 1028 people directly involved in the financing. This record includes 243 registrations to support an acquaintance with the help of a fundraiser, without taking part in the cycling challenge.

In addition to the famous six-day route from Matane, different options are offered to athletes, whether for four, two or one day. All will converge in Boucherville for the arrival, Friday, July 8, at the Parc de la Mairie.