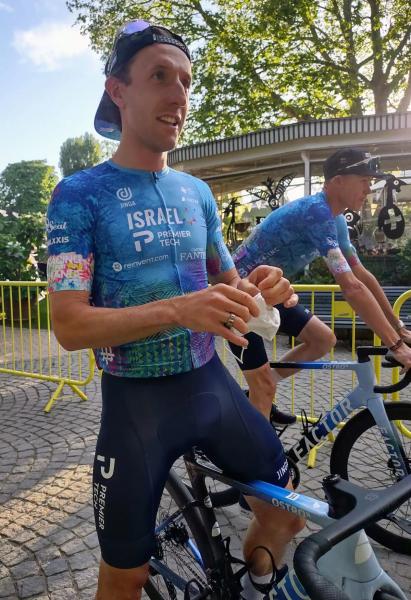 COPENHAGEN | Cyclist Michael Woods wants to make history by becoming the first Canadian since the 1980s to win a stage in the prestigious Tour de France.

After two victories in the Tour of Spain, a victory over Milan-Turin, a podium in the world championship and a 5th place at the Tokyo Games, “Rusty” is still looking for the ultimate consecration. The 35-year-old cyclist wants to get the victory that fans will not forget. And so does he.

A father of two young children, Woods is still at the top of his game, but he knows he won't be playing the pros for another ten years.

“That's what I miss and it's important to me. This is also the goal for the team. I believe it is possible. I have missed opportunities in the past with falls. If I stay on the bike, I have a chance of winning, ”explains the native of Ottawa.

For stat buffs, the last Canadian to win a stage of the Grande Boucle was Steve Bauer in 1988. Two years earlier, Alex Stieda had done the same thing. Since then, Ryder Hesjedal has won the Giro in 2012 and achieved two successes in Spain, but nothing in the Tour de France.

Last year, during the 14th stage, Woods had endorsed the jersey at mountain peas despite another fall.

“I know how to win a grand tour stage but in France it is another level. Froome has never completed a lap without a fall. With complicated stages like that of Roubaix (the 5th), it will be harder. And if it rains, it will be disgusting!” Woods said in the language of Molière.

The general classification will not be a priority for him this year and he could give up some ground at the start of the event in order to obtain more latitude from the peloton if they attempt a breakaway.

Froome does not give up

In Denmark, the press conference of the Israel-Premier Tech team was sold out on Thursday, in particular due to the presence of Dane Jakob Fuglsang and star Chris Froome, four-time champion on the Champs-Élysées in 2013, 2015 , 2016 and 2017.

Without results since a terrible fall which could have killed him in the Dauphiné 2019, Froome is still trying to regain his former level despite his 37 years. Motivated by his numbers and feelings, he ruled out the idea of ​​retiring at the end of the current season.

Chris Froome couldn't be slimmer 24 hours before the start of the Tour de France.

“Especially with the great progress I've seen, it gives me a lot of hope to keep moving forward.” True or false, you can still feel the passion in this tall skinny man born in Kenya. In 2022, it is even Montreal coach Paulo Saldanha who takes care of the former champion. A little unknown to the general public, Saldanha has also been a close collaborator of Woods for many years.

Before the media, co-owner Sylvan Adams also suggested that Woods recruit Antoine Duchesne in order to bring all Canadians together.

At the center, Antoine Duchesne trained with his teammates on Thursday, near Copenhagen.

“It’s not my job to do that but it would be cool. I'm very proud of this team and very proud of Canadian cycling right now. With four runners, it's a record,” replied his foal and friend.

Michael Woods has already targeted the 7th stage on the summit of La Planche des Belles Filles on his calendar. Before leaving, the cyclist repeated that he wanted to return to settle in Quebec with his family at the end of his career.

“It was in Quebec that I started my career. It's the place I love the most in Canada and I used to do my training in Gatineau Park.”

After a darker period for Canadian hopefuls, the structure put in place by two deep-pocketed partners suggests a solid and lasting business partnership for Canadian cycling.

While several WorldTour teams are constantly looking for new sponsors to make ends meet their budget of a few tens of millions each year, the recent association between businessman Sylvan Adams and the president and majority shareholder of Premier Tech de Rivière- du-Loup, Jean Bélanger, seems to have a bright future.

In fact, the two men are already talking about a long-term agreement to see our local talents blossom and shine on the biggest circuit in the world. Unless there is a disagreement, this is not a toy for two or three years.

“We have an interest in becoming the home for Canadian and Quebec runners. I have two nationalities. I was raised in Quebec and now I live in Israel. I find it very normal to cultivate our talents and give them the chance to reach the highest level of sport,” explains philanthropist Adams.

A decade ago, Steve Bauer's defunct Spidertech team helped develop several cyclists, but the adventure came to an abrupt end in 2013. Since then, Adams acknowledges that some athletes have given up on the sport for lack of support. . “Definitely. There was no place for them,” he says bluntly.

Without opening his game, the boss could be interested in the new elite champion Pier-André Côté. “It's neither Jean nor me who does this job, but all these beautiful people are on the radar of the team”, summarizes Sylvan Adams.

In an interview, the CEO of Premier Tech also used the expression “long term” several times. “If we team up, it’s not a one-night stand affair. We are two partners who are able to write checks. Not to go on a merry-go-round for two or three years. It allows you to say to young people who join the program, we can support you for a long time. We cannot rewrite the past but we can influence the future. This is our common project,” adds Jean Bélanger.

In Quebec, many people are familiar with Premier Tech, but very few are able to properly explain the field in which this world-class company, present in 28 countries, specializes.

“We are in the robotics, horticulture, the environment, in digital technology. The deep desire in our genetic code is to make a difference to help our customers to be better in their own market. We want to have a lasting impact with products that will help feed, protect or improve our planet,” summarizes the CEO.

On a sporting level, the team's difficult situation in the world rankings has greatly improved in the last month and demotion seems less likely.

Sylvan Adams assures that the team has now gained momentum. “Every contract has a force majeure clause and we have experienced force majeure conditions. Our performance is starting to be respectable. I personally guarantee that we are not going to finish below the line.”

“I have no never seen an athlete as mentally strong as Chris Froome. We took a chance signing him. Until now, I must admit that he has not produced. He did not deserve his selection as such. As a cycling fan, I hope he will surprise us.” – Sylvan Adams.

At the start of the Tour de France, the first stage seems destined for a human rocket that will travel at nearly 60 km/h through the streets of the Danish capital.

On this July 1, the day of On Canada Day, no local talent will make it to the podium even though Hugo Houle, announced at 5:52 p.m., could deliver a respectable performance.

Up front, Hugo Houle pedaled with his team in anticipation of the first stage scheduled for Friday.

After a lot of feedback from athletes over the past three days, but also a lot of changes to team rosters due to the Covid, the Tour will finally start with a short 13.2 kilometer individual time trial.< /p>

On the route, the Queen Louise Bridge is renowned as the busiest cycle route in the world. The cyclists will present themselves one by one on the starting ramp, for a circuit in town which will take them in particular in front of the gardens of Tivoli and the Little Mermaid. The few turns will not deprive the most powerful rider of a significant gain.

Barring a surprise, two favorites stand out: Filippo Ganna, the double world champion in the specialty, and Wout van Aert, winner of the last stage of the Grande Boucle last summer.

Quickly, Quebecer Guillaume Boivin will be the third of the 176 cyclists to set off at 4:02 p.m. event, the Swiss Stefan Küng will be able to take the start of the Tour de France despite a positive test for Covid recently. However, his preparation has also been disrupted by the arrival of a first baby last week.

The first wearer of the yellow jersey should be confirmed around 7 p.m. in Denmark, at the start of afternoon in Quebec. The average speed over 13.2 km is estimated around 54 km/h.

The weather could influence the result. Who will ride dry or wet?