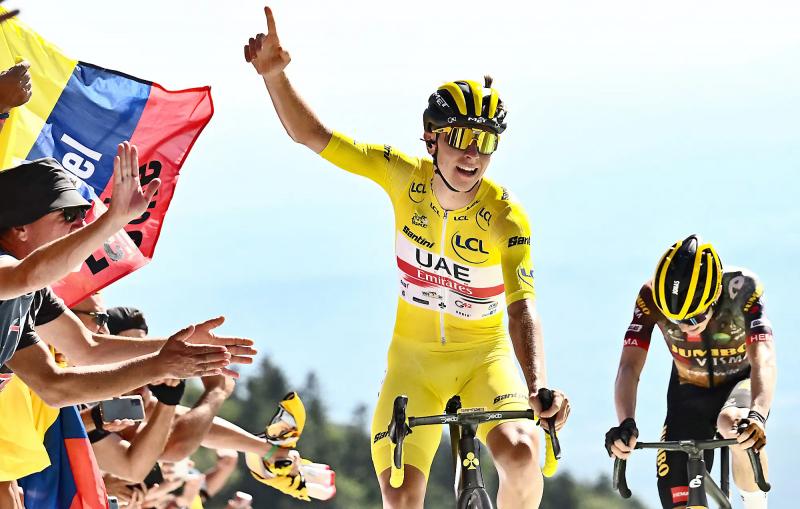 LA SUPER BOARD DES BELLES FILLES, France | The Slovenian Tadej Pogacar hit the mark again in the Vosges mountains this Friday, but fortunately for the rest of this 109th Tour de France, his Danish runner-up Jonas Vingegaard is only 35 seconds behind in the general classification.

With a third of the way covered to Paris, the double defending champion absolutely wants to leave nothing to his adversaries.

After a victory as a puncher on a hilly stage, the 23-year-old cyclist made a coup double in the high mountains, Friday, with a new bouquet during the seventh stage at the top of La Super Planche des Belles Filles.

And since Pogacar can also be ultra-fast in the time trial, the morale of the other tenors takes a beating.

Imperial in Haute-Saône , the yellow jersey made the German Lennard Kämna eat the dust, the last survivor of the breakaway, who nevertheless believed he was going to the end of his dream less than 100 meters from the line.

The indomitable “gravel” wall, an unpaved passage, however, was fatal to him, even though he had a 45-second lead with two kilometers to go.

Undisputed boss, Pogacar preceded Jonas Vingegaard, Primoz Roglic and Kämna, who will relive for a long time in his head the film of the heartbreaking stage of his career. Geraint Thomas and David Gaudu, who is beginning to assume his role, follow behind.

Not to kill the show, the first 16 cyclists at the finish finished less than a minute from the winner and there will still be several battles to come since Vingegaard almost won a round against Pogacar on Friday. The latter, however, has looked behind him once too often.

Invincible in appearance, he is not, however, untouchable. A psychological war is taking shape between the two young men.

“Jonas attacked really hard. A lot has happened since my victory here in 2020. Vingegaard is a great climber, one of the best in the world and maybe the best right now. He will of course be a rival for me and he has a very strong team, ”explained Pogacar.

Wout van Aert also believes that the Jumbo-Visma can win the Tour.

< p> “Pogacar won, but we still showed that we are there. With Jonas and Primoz, we can compete in the high mountains. »

Despite the climbs, this 176.3 kilometer stage from Tomblaine was swallowed at breakneck speed with an average of 44.3 km/h.

We were expecting Michael Woods, a surprising climber on a final with a 24% inclined slope. The scenario of the day was not favorable to him and the 35-year-old Canadian will have to fall back on another stage. Woods took 28th place just over two minutes behind Pogacar.

Bardet in the game

“I tried to take the escaped, but I was unlucky. The legs were good and that's a good sign for the future, ”he explained, a little enigmatic.

Frenchman Romain Bardet, eighth in the stage with a 21-second gap, seems to be back among the best. His delay of 1 min 32 s places him in sixth place in the general classification. A good omen in his case.

“I broke down at 150 meters. I lacked grip,” he explained in the dusty crush of the summit.

For his part, the sympathetic Magnus Cort has no illusions about the polka dot jersey, which he still holds.

“I will probably lose him soon. I'm sure Pogacar will overtake me in the climber classification. »

Finally, one of the big favorites of the crowd, Thibaut Pinot, was not able to give battle.

The eighth stage over 186 km between Dole and Lausanne, Switzerland, are promised to the punchers with a finish at the top of the Olympic Stadium hill.

The mass hysteria is finally back

Many cycling enthusiasts were cheering on cyclists along the roads this Friday, during of the seventh stage of the Tour de France.

On a beautiful day, the return of such a large crowd after two years of pandemic made many cyclists happy.

“It was wonderful and I felt good. For the first mountain stage, it was crazy. Being there with David [Gaudu] and Thibaut [Pinot], everyone knows us and there are more shots of us. It was a good day,” said Antoine Duchesne, still smiling at the finish.

If in 2013 the foreign press wondered about Quebecer David Veilleux, it was one of the first times that the culture of La Belle Province raised some questions on Friday.

“I saw a Quebec flag somewhere in the middle of the stage. I don't remember where, but I saw it. This is very good, especially for Quebecers. We grew up together, we have been racing together for 15 years and we are friends. We dreamed of the Tour, so to be here is fantastic and good for Canadian cycling. We show young people that it's possible,” Duchesne told an English-language television station.

After finishing his work as a teammate, Duchesne took 104th place for the day, just over 12 minutes behind.

The Groupama-FDJ team worked for Pinot at the start of the day, but finally regrouped around Gaudu.

For his part, Hugo Houle confirmed that the strategy of placing Michael Woods in the breakaway had not paid off.

“It's a bit of a lottery. It was going very fast. It's nice to see such a dense crowd again. It's part of our job,” added Houle, still in full possession of his abilities.

Furthermore, the final climb was painful for Jakob Fuglsang, of the formation Israel-Premier Tech. The Dane finished in 47th place more than five minutes behind Tadej Pogacar.

“We are going to focus on the stages, which changes our strategy a bit, commented Hugo Houle, 68th at 2 min 5 s. I finished quietly as my work was done. »

Finally, the other Quebecer, Guillaume Boivin, crossed the finish line without a problem, 15 minutes behind the winner. He quickly turned around to return to the coach below.

This mountain stage will put an end to a demanding week. The sequence in Switzerland will shuffle the cards, but without pushing the peloton to its limit.

The final at Pas de Morgins suggests a climb of 15.4 km at 6.1% on average. Monday, the second rest day of the Tour will be taken in Morzine, in the French Alps.

< li>After a jump at the start in Tomblaine, Le Journal headed for La Planche before climbing the winding route for the first time by car through the human tide. Once at the top, you had to go down the forest path and take the media shuttle to return to the top. The general evacuation – guided by the gendarmerie – took place at breakneck speed on the edge of the precipice.