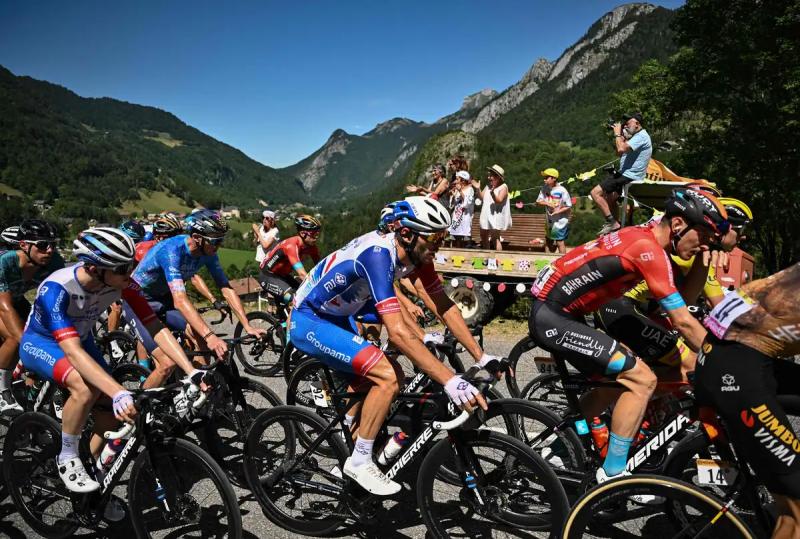 (Sportcom) – The Tour de France leaders regrouped on Tuesday, but a BORA-Hansgrohe cyclist snuck out during this 10th stage. The German Lennard Kämna tried to steal the yellow jersey from the Slovenian Tadej Pogacar (UAE Team Emirates), who resisted at the end of the 148.1 kilometers of the day.

For Quebecer Antoine Duchesne and the Groupama-FDJ formation, the objective of protecting Frenchman David Gaudu was achieved the day after a second day off since the start of this 109th Grande Boucle.

“ [We had] a big battle at the start with UAE, which had very little control at the start of the race. It gives a very hectic start to the race and everyone is on the attack, which makes it quite difficult,” commented Duchesne, 88th of the day.

The Saguenay cyclist supported Gaudu to maintain his good position in the general classification. He finished 25th in the peloton and thus remains 1 min 38 s behind Tadej Pogacar and the lead.

“Everything went well. We were in control on the final to place David, who followed the leaders. For now, everything is okay. We are now preparing for very hard and very hot days this week,” added Duchesne.

For his part, Hugo Houle (Israel-Premier Tech) followed his compatriot closely, finishing 89th. The athlete from Sainte-Perpétue tried on a few occasions to be part of the breakaway of the day, without success.

“We knew that the breakaway had a lot of chances of making it to at the end. In the end, I was in the game, but it was the counter-attack that started,” he said, satisfied with his feelings.

His teammate Simon Clarke, winner of the fifth stage, was one of the runaways. Houle opted instead to join the peloton and hold onto his strength for the next steps.

Guillaume Boivin, also a member of the Israel–Premier Tech team, was ranked 136th.

Note that a group of demonstrators blocked the runners' path to protest against climate change with about 35 km to go, which forced a temporary stop of about ten minutes.

“It hurt my legs when we had to start again, but it was surely worse for the runners who had escaped. In the peloton, we had a slightly calmer pace. It sure broke the rhythm, it doesn't often happen that you have to stop, ”commented Houle.

Before arriving in Megève, the Spaniard Luis Leon Sanchez (Bahrain-Victorious) broke away from the leading group with six kilometers to go. Meanwhile, the German Lennard Kämna was in good shape to take both the stage victory and the yellow jersey. However, he hesitated for a while and Sanchez increased his lead, while the other cyclists contained him in the chasing group.

The Australian Nick Schultz (BikeExchange–Jayco), the American Matteo Jorgenson (Movistar) and Dutchman Dylan Van Baarle (INEOS Grenadiers) then accelerated and invited themselves to the party alongside Sanchez.

The chasing group caught up with the quartet on the climb to the Megève altiport after crossing the red flame. A two-man sprint took shape in the last 100 meters and Denmark's Magnus Cort Nielsen (EF Education-Easypost) edged out Schultz by only a few centimeters to win.

Kämna, who closed the walk within this group, was the 10th to cross the finish. He then waited for the result of the Slovenian Tadej Pogacar (+ 8:54), who managed to defend his yellow jersey thanks to a 20th place.

The double defending champion holds an 11 lead seconds on Kämna in the provisional general classification. Denmark's Jonas Vingegaard (Jumbo-Visma) is in third place, trailing the leader and big favorite by 39 seconds.

After Norwegian Vegard Stake Laengen retired with COVID-19, Tadej Pogacar saw another team member withdraw from the Tour de France on Tuesday for the same reason. New Zealander George Bennett had to throw in the towel.

The 11th stage, 151.7 km long, could shake things up on Wednesday. After the imposing Telegraph and Galibier passes, a final climb of 11.3 km awaits cyclists at the Col du Granon, at an altitude of more than 2400 m.